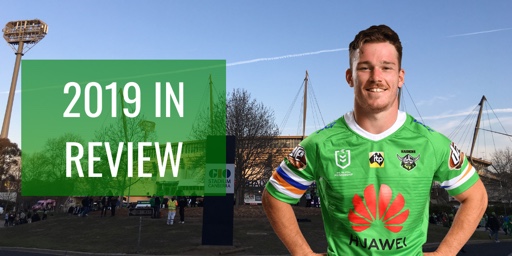 Tom Starling made three appearances for the Canberra Raiders in first grade in 2019 from Round 12 to 14, all on the bench. He was on a development contract this season - and was brought into the team while Josh Hodgson was on the sidelines with a fractured thumb. He needed special permission from the NRL to play first grade before 30 June. But he won't need that next year, if called upon, because he's been added to the top 30 squad for 2020. He'd only played one NRL match before this year, with his former club, the Newcastle Knights in the final round of 2018.

Starling took on the role of dummy half cover for Siliva Havili in his three games, averaging just under 20 minutes per game.

"I am taking it week by week. It was good to get 20 minutes under my belt on the weekend so hopefully will build on that," he said after making his debut in green against the Bulldogs. "Whenever Ricky needs me again, I’ll be ready to go."

"I rate Josh Hodgson in the top three hookers to ever play so to have him here, I’m just like a sponge. We also have Mick Ennis down here too so I am licking my lips at the opportunity down here to continue building on my game."

I rated him an average of 5/10 over his three matches. His best NRL game came in the Round 13 win over the Wests Tigers. In that game he made two dummy half runs for 19 metres, one tackle break, 17 tackles and posted 89.5 per cent tackle efficiency. Obviously, it is difficult to make too much of his NRL season statistics, but it is worth noting he averaged just under 10 metres per carry and had a tackle efficiency rate of 91 per cent. He made 20 appearances for Mounties in NSW Cup, scoring six tries and producing nine try assists. He also posted five offloads; an average of 82 running metres and 24 kicking metres per game; and 91 per cent tackle efficiency.

Starling was the smallest player in the NRL in 2019, with the 21 year old standing at 170cms and weighing in at 82kgs. That makes his defensive statistics all the more impressive - and he's already shown he can make an impact running from dummy half. Clearly, he's a depth hooker at present, but he's young and has plenty of time to develop.

Another tough one to really score, but happy to go with 3 overall and 5 for on field play.
Looks a 'jack in the box' type hooker, and certainly hits harder than you would expect. Definitely earnt his top 30 upgrade, even if it is as hooker #3.
Top

1/10, did he play more than ten minutes all season?

Impossible to fairly rate, but he didn't look out of place out there. Obviously has a great attitude and is mentally quite tough playing his role at that size.

Didn't watch enough Mounties games to get a real feel for how valuable he is to our squad.
Top

He played at total of 58 mins.

Regards,
Dubby
* The author assumes no responsibility for the topicality, correctness, completeness or quality of information provided.
Top

Limited game time but had a real crack when on the field. Very quick from dummy half. Much smaller than our 2 main hookers. Just needs more experience in FG which he is unlikely to get at the Raiders. He will fill the FG role should we need to call on him. 3/10 based on low minutes.
Top

Needs to bulk up a bit more if he's going to play more minutes per game.

I know we're supposed to only take his NRL season into account, but I liked what I saw of him in the pre-season games.

I'd give him a 4.
Some people talk about the weather. Others do something about it.