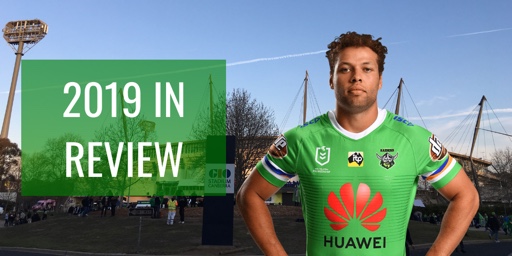 Sebastian Kris, aged 20, is a Canberra Raiders junior, coming through the ranks from the Valley Dragons. He was part of the NSW Blues Under 18s team in 2017 - and a development player in 2018 at the Raiders. He was promoted to the top 30 squad this year, and he made his NRL debut from the bench in the Round 10 clash with the South Sydney Rabbitohs at Canberra Stadium. He waited 75 minutes on the bench, before being introduced to first grade. After his five minutes on the field, he came off missing half a tooth.

"I just pulled my mouthguard out and there it was, just sitting there, so I put it back in to make sure I didn't lose it," Kris said at the time. "I did it previously, but it's just comes out again. To be honest I don't know when it was, it was that fast and that tough, I didn't really recognise it until the end of the game."

"It gives me a lot of confidence actually. I believe in myself a lot more now I know I can come out here and actually do it," Kris said.

He went on to play a total of four first grade games, with two at centre and one on the wing.

I rated him an average of 5.3/10 for his four games, with his overall rating reflecting his low number of first grade games. His best game was the Round 12 win over the Bulldogs, when I rated him a "7". In that match he scored a try, and produced 10 runs for 87 metres, 25 post contract metres and 30 tackles. Three tries in four games was a pretty good strike rate, particularly for a rookie. His averages were impacted by the fact he only played five minutes in that first match, but it is worth noting his tackle efficiency rate (88 per cent) was the best of any of the Raiders' backs.

Kris played 17 games in NSW Cup for Mounties, with one on the wing and the remainder at centre, He scored five tries and averaged 94 running metres, 55 kick return metres, 14 tackles and 1.2 missed tackles per game. He also produced five line breaks and four tackle breaks. His tackle efficiency rate in NSW Cup was 86 per cent.

Kris is a player with very good potential, though he's probably developed more slowly than I thought he might, given the dominance of some of his performances at junior level. He'll be working on his consistency and involvement rates - and he's got his work cut out for him in 2020, because the Raiders now have considerable depth in the outside backs. But now he has dipped his toe in the water, I'm looking forward to seeing what he can do next season.

How did you rate Sebastian Kris's 2019? Tell us below.

Really not much to judge him on. Didn't look out of his depth which was a good sign. 3/10 is fair given the limited game time.
* The author assumes no responsibility for the topicality, correctness, completeness or quality of information provided.
Top

I really liked the look of him. Not sure his future is at this club... in fact if he wants a genuine crack at FG it probably isnt with Curtis Scott on the books now. But i think he showed a bit of talent and i think if he gets a chance elsewhere he can have a solid NRL career.
CREATE PROCEDURE BotMan_Post AS
SELECT * FROM Previous_Post
EXEC quote_post
WHERE UserName = 'Aknalkfgnaa' OR 'Yeah Raiders' OR 'Billy B'
EXEC RAND(good_grief; cheak_notes; uh82cit;)

Botman wrote: ↑
December 4, 2019, 9:04 am
I really liked the look of him. Not sure his future is at this club... in fact if he wants a genuine crack at FG it probably isnt with Curtis Scott on the books now. But i think he showed a bit of talent and i think if he gets a chance elsewhere he can have a solid NRL career.

It's really hard to say on that score. At his age the key will be his trajectory. Plenty of scope to improve and become an established NRL player. Of course he may already be at his peak in which case he could be a career fringe player. We also occasionally see young players regress. Mainly because they need to pursue careers outside of rugby league.
* The author assumes no responsibility for the topicality, correctness, completeness or quality of information provided.
Top

I don't think he played enough to give him a score. I'd just say he looked better than I expected.
Top

Hard to judge on 4 games, but did his job. His 3 is more on games played, so fair enough. 5.3 game avg suggests avg player to me. So fair enough.

Personally I think NRL is going to be out of his depth, and that there are more talented players, like Smith-Shields who will jump past him. Obviously we have Scott now too.
Top

Solid on both sides of the ball which is pretty rare for a centre these days. If he improves as he should I can see him having a long NRL career.
Top

Yep, quality player to have in the squad. Did his job well.
Top

I really don't think you should be scoring these guys who hardly play. 4/10 for mine, but it doesn't tell the true story.