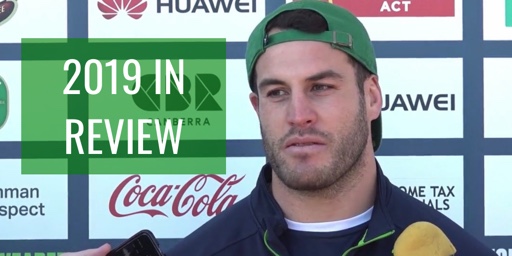 Michael Oldfield joined the Canberra Raiders in mid 2017 - and has now made 18 first grade appearances for the club, half of them in 2019. He played five of his nine games this season at centre, four on the wing. He's something of a journeyman - having previously played at the Sea Eagles, Roosters, Rabbitohs, Panthers and Catalan Dragons. And while he's not a regular in firsts at the Raiders, he's become an important senior figure at the club and part of the leadership group.

Oldfield missed the first five rounds of the season with a groin injury, playing his first match of the year for Mounties against the New Zealand Warriors in Round 6. He went on to play 10 matches in NSW Cup, eight of them in the second half of the season.

Oldfied was a late inclusion in the Round 8 NRL clash against the Panthers at Wagga - after Joey Leilua was ruled out with a serious neck injury - and scored a try in his first NRL match of the year. With the club stricken by injuries to Leilua and Jordan Rapana, he played five first games in a row between Rounds 8-12. He also covered for a suspended Nick Cotric between Rounds 18-20. He unfortunately suffered a shoulder injury in the final regular match of the season, when the club rested a number of stars, certain in the knowledge that a top four spot had been wrapped up.

I rated him an average of 6.1/10 through the season. I rated him a "7" in two matches, the Round 20 and 25 clashes with the New Zealand Warriors - scoring a try in each. The better of the two was the win in Auckland. In that fixture, he produced one try assist, one offload, two tackle breaks, 123 running metres, 40 post contact metres and 13 tackles. His top tackle count came in the Round 18 win over the Tigers, while his running metres gained peaked in the Round 10 loss to the Rabbitohs. He did not register any points in Fans' Choice Player of the Year voting. His overall rating reflects the fact he only played in a third of the Raiders’ 27 NRL matches.

Oldfield scored five tries for the season, which is not a bad strike rate in nine matches. He averaged one try involvement per match, equal first at the Raiders with Jack Wighton. He ranked eighth at the club for average running metres and equal second, with Jarrod Croker for metres per run (10). His tackle efficiency improved (83 per cent, compared with 71 per cent in 2018) and he reduced his try causes from eight to two. He conceded only two penalties, but averaged one error per match, ranking fourth at the club.

Oldfield is not a first choice outside back, but he offers good depth, and when he's come into the squad, he's reliably done his job. He's obviously a good influence around the club, winning the Clubman of the Year award at the Meninga Medal presentation in 2018. There's no doubt it will be a real plus for the Raiders to have him in their squad in 2020.

How did you rate Michael Oldfield's 2019? Tell us below.

5/10 simply because he didn't play much. Did a great job when called upon. Guys like this are valuable members of the squad. Reserve players who capably fill the gaps if needed.
* The author assumes no responsibility for the topicality, correctness, completeness or quality of information provided.
Top

Much like Sam Williams you can just trust this guy to do the job. Defense improved a lot. Perfect squad member. Keeps everyone honest.
Top

Bonus point because Tubular Bells is a classic
* The author assumes no responsibility for the topicality, correctness, completeness or quality of information provided.
Top

Northern Raider wrote:Bonus point because Tubular Bells is a classic

Great winger. Ordinary centre (especially in defence). We're lucky to have him in the squad.