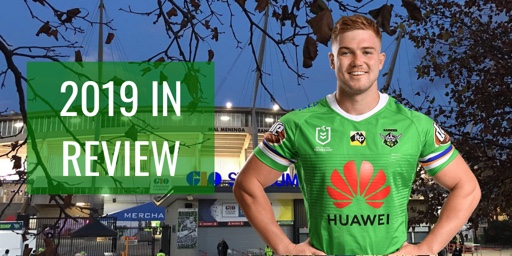 Hudson Young was promoted to the Canberra Raiders top 30 squad for the 2019 season, after impressing in the club's Jersey Flegg and NSW Cup pathway. He started the season with Mounties, before making his NRL debut in Round 3 against the Newcastle Knights. He went on to make 12 appearances in first grade and six for Mounties. He started four games in the second row, and was selected on the interchange bench in the other eight.

It was a controversial debut season for the 21 year old forward, suspended twice for eye gouging. He was suspended for five weeks after an incident in the Round 12 clash with the Bulldogs, involving dangerous contact on Aidan Tolman. He took an early guilty plea rather than risk a seven week ban - though the Raiders had considered seeking a downgrade of the charge. He made his return to football in Round 19 for Mounties, and played three NSW Cup games before being promoted back into first grade for the Round 23 fixture against the Sea Eagles. He was again in strife after an incident involving Adam Pompey in the Round 25 clash with the Warriors. He was sent straight to the judiciary - and despite Pompey testifying that no contact had been made with his eyes, Young was banned for eight games.

The incidents produced considerable debate in the wider rugby league community about the consistency of the NRL match review committee, with Josh McGuire escaping with fines for similar offences. Raiders coach Ricky Stuart described the reactions of some commentators - who called for massive suspensions - as "vicious", particularly given Pompey did not react on field as if he were in any way injured and he was prepared to speak in Young's favour.

However, the bottom line is that there is no place in the game for old fashioned "facials" in 2019 - and Hudson Young will surely have learned that lesson. It remains to be seen whether the NRL will act to overhaul the match review/judiciary process, so as to deliver more consistency.

I rated Young 5.8/10 on average through the season - but his rating for the season overall reflects his time suspended on the sidelines and in "reserve grade". I rated him a "7" in six of his 12 matches. His best match came in the Round 24 clash with the Sharks at Cronulla, when he made 129 running metres, 43 post contact metres, three tackle breaks, one offload, 41 tackles and just one missed tackle in just under 50 minutes. I was possibly a bit harsh in not rating him an "8". He posted points in Fans' Choice Player of the Year voting in the Round 10 clash with the Rabbitohs. In that game he played 80 minutes at second row and made 66 running metres from seven runs, four tackle breaks and 27 tackles.

Young averaged just under 45 minutes on the field, so his statistics reflect his game time. He showed a little more flair than some of the Raiders forwards in attack, with three try involvements, two line breaks and one line break assist - but that was still relatively low. He ranked third for average tackle breaks. He was equal seventh for running metres per carry, alongside Corey Horsburgh - and ahead of Dunamis Lui, Ryan Sutton and Elliott Whitehead. However, his average running metres (52) were amongst the lowest in the Raiders forwards. In defence, he averaged just over 21 tackles per game, ahead of Horsburgh, Lui, Sia Soliola and Siliva Havili. His tackle efficiency rate was relatively low (89 per cent) - not due to his missed tackles, but his ineffective tackles (ranked highest on average for a Raiders forward). His average error count was very low, but he ranked fifth for penalties conceded per match amongst the forwards.

Hudson is still very young for a forward, at age 21, and has great potential... but he's going to have to be more disciplined. Having met him a couple of times, albeit briefly, I believe he's a good young bloke - and he will learn from 2019. There are other parts of his game to improve upon as well. But in his rookie year he showed he has the capacity to become a very good NRL player. I'm keen to see what he can do when he gets back on the field in 2020.

I'd give him a 3. When he did play he had some great games but you have to factor in his multiple brain explosions. If he can change his ways he should have a long first grade career.
Top

Liked what I saw.
At the moment he's a lock. Hasn't got the out wide defense down yet but that'll improve as he gets more experienced.
Top

I think he's a good and talented young player who can give us a lot... but it's very hard for me to give him more than 1-2/10 given he gouged twice

Once i can forgive as a mistake by a young kid who was trying to hard to be a tough prick... twice... that's just who you are as a player now and it hurt the team and it hurt the club's reputation. It's up to him to rectify that.
CREATE PROCEDURE BotMan_Post AS
SELECT * FROM Previous_Post
EXEC quote_post
WHERE UserName = 'Aknalkfgnaa' OR 'Yeah Raiders' OR 'Billy B'
EXEC RAND(good_grief; cheak_notes; uh82cit;)

Hudson needs to right some wrongs.

The talent is there, his rugby league skills aren't being questioned here.

Just cut the rubbish out and play hard.

It's a big year for him in 2020.
3rd Battalion Royal Australian Regiment..Old Faithful
#emptythetank

I agree with those above. His on field play is worthy of a 6. HOWEVER... You lose mega pts for what can only be described (cleanly anyway) as stupidity!
Its a 1-2/10 for me.
Top

3/10. Did a decent job when he played. Didn't play a lot due to his own idiocy. I've therefore cut his score in half.
* The author assumes no responsibility for the topicality, correctness, completeness or quality of information provided.
Top

The talent is there, his rugby league skills aren't being questioned here.

Just cut the rubbish out and play hard.

When does his suspension end ?
Top

There are five weeks left... you used to be able to count one trial in a suspension. Not sure if that’s still the rule.

1/10 and lucky to still have a contract next year. There have been past players forced to leave for much less e.g. Steve Irwin. Multiple eye gouger who has already been given one chance too many for mine. Previously had to sit out for testing positive to banned substances. There goes the culture Rick.
Top

He has talent for sure, and a high ceiling, but if he even gets a finger near another players eye this season, I want him shot out if a cannon to land somewhere else....
Top

Mate, he's had 3 strikes before he's finished a year of first grade. He is lucky to still be at the club.

He'll have a fair bit of work to do to win back the fans in light of that.
Top

Yeah, while I firmly believe these gouging incidents were terrible and demonstrated poor judgement, I also think that last one was pretty benign and nowhere near as bad as some of the other crap you see players get away with. In saying that, I really hope he has learnt his lesson and doesn't put his hands anywhere near a players face again.

Terrific young second rower who doesn't look at all out of place in First Grade. Could be an excellent long term replacement for Whitehead, who turns 31 next season.

If Wighton can turn his career around in an offseason, like we saw last year, I'm backing the club to help Young do the same.
Top

Haha I'm going to have my nomination for Obsession of the Year go to gerg and his propensity to bring Paul Gallen/Cameron Smith into every single discussion that has nothing to do with them.

I know this guy playa for us, but I just can't put my finger in it regarding who he is..
Top

1/10 and that’s being generous as he hasn’t show too much on the field just yet as a player either imo.
well, I guess you could say that I'm buy curious.
Top

I think he's shown signs of talent.
But like most, you'll let the gouges cloud your judgement.
Im just, bicking back being bool
Top

He’s shown some signs of talent, but nothing out of the box or even suggesting he’s a career first grader imo.
well, I guess you could say that I'm buy curious.
Top

I can see this kid surprising a lot of people in 2020.

I liked what I saw and would encourage him to cut the rubbish, put his head down and work hard.

Could have a similar impact as Red Horse if he pushes himself.
Top

GreenMachine wrote:I can see this kid surprising a lot of people in 2020.

Hopefully not in the way he surprised a couple this year.
Top

I liked what I saw and would encourage him to cut the rubbish, put his head down and work hard.

Could have a similar impact as Red Horse if he pushes himself.

I think he could eventually prove himself to be the best of the young bunch between himself, Horse and Guler and I rate them all.
Top

Haha I'm going to have my nomination for Obsession of the Year go to gerg and his propensity to bring Paul Gallen/Cameron Smith into every single discussion that has nothing to do with them.

My comments are directly related to HY.

GreenMachine wrote:I can see this kid surprising a lot of people in 2020.

Hopefully not in the way he surprised a couple this year.

Indeed
I think the entire fan base will be keeping their eye on him. Let's hope he doesnt gouge it.
CREATE PROCEDURE BotMan_Post AS
SELECT * FROM Previous_Post
EXEC quote_post
WHERE UserName = 'Aknalkfgnaa' OR 'Yeah Raiders' OR 'Billy B'
EXEC RAND(good_grief; cheak_notes; uh82cit;)