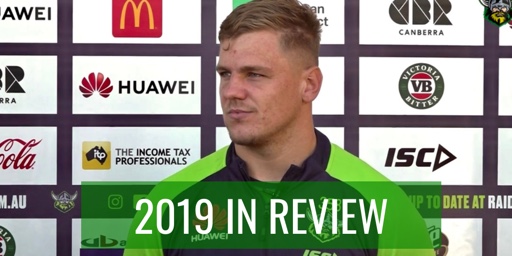 Ryan Sutton joined the Canberra Raiders from the Wigan Warriors on a two year deal in 2019 - and made 20 appearances in green in his debut season in the NRL. He started at lock in 11 matches and at prop in two - with his remaining appearances off the interchange bench. He mostly came off the bench in Wigan's premiership winning season in 2018 - but actually looked at his best with the Raiders when starting.

He played every match of the season up to the Round 15 clash with the Eels in Darwin - but suffered a calf injury at training in the lead up to the Round 17 match against the Dragons in Wollongong.

"It was a bit unfortunate what happened. We'd finished training and I took one little step and it felt like a golf ball had hit me in the back of the calf," Sutton said at the time. "I got a scan and it said it was a grade-two tear."

The prognosis was six weeks on the sidelines, but he returned slightly early in the Round 21 loss to the Roosters. It is fair to say that it took him some time to get back into the groove. He played the remaining matches of the regular season, but did not appear in any of the three finals matches. He was selected in the top 17 for Week 1 of the finals, but was a late omission, with Emre Guler preferred. He was in the top 19 for the Preliminary Final and Grand Final, but did not play in either game.

"Missing out on those last three games and the grand final it's really given me a kick up the ****," he said, admitting inconsistency had cost him.

"I'm going to work tirelessly through the off-season and the pre-season to come back to be the fittest and best I've ever been. And make sure that doesn't happen again because those three games are probably the most upset I've been the whole of my career."

I rated Sutton 6.4/10 on average through the season - and that is virtually mirrored in his rating for the season overall. I rated him an "8" in two matches, the Round 4 win over the Cowboys and the Round 13 victory over the Wests Tigers. Against the Cowboys, he made 15 runs for 134 metres, 42 post contact metres, 36 tackles and posted 94.7 per cent tackle efficiency. Against the Tigers he delivered 19 runs for 163 metres, 40 post contact metres, three dummies, 47 tackles and hit 96 per cent tackle efficiency. Round 13 was the only game in which he registered points in Fans' Choice Player of the Year voting - and it was the match in which he posted his top tackle count and running metres.

Sutton was selected for the England team to play in the World Nines at the end of the season - and performed well - but missed the the Great Britain Lions squad for their end of season tour.

As mentioned earlier, I thought he was at his best when starting. I wasn't that impressed with his trial form - though we were told much later that that was impacted by injury. But when he got his first starting game at lock in Round 3, he really started to make an impact - so much so, I thought he'd make a good starting prop partner for Papalii. His calf injury really disrupted his season - and as he's said himself, next year he'll want to improve on his end of season form. However, he's still fairly young for a middle forward - aged 24 - and I think he's got a heap of potential. I've no doubt he'll put a lot of pressure on some other bench forwards for a spot in the top 17 in 2020.

I only give Sutton a 5/10. I thought he missed too many games. Probably a 6/10 for his time on the field, he was solid, showed definite glimpses of potential, but needs to get the errors out of his game.

Definitely hoping for a big year in 2020. For mine he and Lui will be fighting it out for that 4th bench spot.

I'd give him a 5/10 as well. I think his first few games in the middle were exceptional and really helped set the standard for our defense but he fell away too much to get more than that.
Top

We'll be looking for improvement next year.

He was part of setting up our year with a vastly improved defence across the park and he helped establish that- good defensive discipline and accountability. It shouldn't be discounted.

He was no great shakes in attack- seemed to lose the contact and get put straight down quite often for a big guy.

Part of that might improve on a learning curve and better fitness + a year exposure to NRL should see some of those errors drop out.

Quite rightly Papa, Tapine, Sia, Hors, Guler, Lui, Sutton are 7 guys, in that order, going for 5 middle spots at the moment. If Young is in the middle mix he's #7 for mine right now after his dumb suspensions and what he's shown on the park (ok but nothing starring).

If Lui and Sutton are our depth props we are in really great shape. Over a season, given Sia's age, suspension, injury and rep duty all will play at least 6 games I think.

But Sutton himself will want to be playing first grade regularly. He doesn't offer enough impact to be a bench middle. Either he finds another gear next year or it will probably be his last.

Step up or back to SL.
Top

He had a slow start to the year. Started to show some real promise, then got injured. He was then out for what seemed like forever, before getting 1 or 2 games, then dropped for Emre.

I think he was probably 4 to start the year, maybe a 6-7 for that middle stint, then maybe a 5 for those last couple of games. So 5-6 seems about right. Not sure I can go higher than that.

His best performances were at lock while Tapine was injured, and thats because he gets better with time. He needs minutes to be effective, which means he needs 40mins IMO. This is why I think he and Lui are too similar to be in the same side, and ultimately, Ricky agreed. I think its the same for next yr, you cant carry both, so it has to be one or the other. Lucky for him, Young has put himself behind the 8 ball with his 2nd dumb indiscretion, as I think it might be a 3 horse race for that 1 spot come mid yr.

My middles would be:
Papa, Tarpz and Sia starting
Horse, Emre, Sutton/Lui
Top

5 at best. Should probably be released
Top

Wow, there's some harsh calls... I'd have him in the top 17 in front of Dunamis Lui next year. Lots more upside.

greeneyed wrote:Wow, there's some harsh calls... I'd have him in the top 17 in front of Dunamis Lui next year. Lots more upside.

greeneyed wrote:Wow, there's some harsh calls... I'd have him in the top 17 in front of Dunamis Lui next year. Lots more upside.

then release Dunamis, don't need both - mind you I made my opinion when we were signing jack Hetherington

I'd have Sutton Starting next season. Lui to Mounties. BJ/Scott, Soliola, Horse and Guler on bench.
Top
Post Reply
11 posts • Page 1 of 1