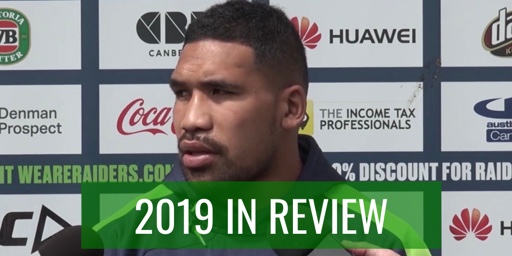 Siliva Havili came to the Raiders in 2018, as cover for injured hooker Josh Hodgson. He ended up playing every game of the season for the Raiders, and made an unexpected splash at starting hooker in the first 14 rounds. On Hodgson's return, he took on the role of bench forward. He made 22 appearances in firsts in 2019, all but three off the bench. Havili deputised for Hodgson as starting hooker in Rounds 12-14, after Hodgson fractured his thumb in the loss to the Cowboys.

He played very limited minutes in the Round 21 match against the Roosters and the Round 24 clash with the Sharks, and he dropped back to NSW Cup in Rounds 22-23. He played well at hooker in Mounties wins over the Knights and Sea Eagles. However he was not selected in the top 17 for the Raiders three finals matches.

There is little doubt Havili makes most impact at dummy half - and the three games when he started at hooker were amongst his best of the year. I rated him an average of 5.5/10 through the season and a "7" in four matches. His best games came in the Round 11 fixture against the Cowboys, and the Round 12 win over the Bulldogs. In the Cowboys clash, he covered for the injured Hodgson in the second half. He scored a try and made six runs for 60 metres, five dummy half runs, four tackle breaks, four dummies and 23 tackles. Against the Bulldogs, he made four runs for 66 metres, one line break and 40 tackles in the space of 60 minutes.

Havili's average minutes fell in 2019, from 44 to 28 minutes per game - reflecting his main role as a bench forward this season. As a result, his match statistics fell away in a number of departments. He ranked 10th amongst the Raiders forwards for average runs (five) and metres per game (52). His average running metres were roughly the same in 2019 as in 2018, but his metres per carry fell slightly (from 11 to 9.7 metres). He ranked fourth amongst the Raiders forwards for tackle breaks (23, down from 32 in 2018). In defence, his tackle efficiency rate improved (94 per cent, compared with 91 per cent in 2018) - equal first at the club, alongside Josh Papalii. His average tackles per match fell to 16 (22 in 2018), the lowest amongst the Raiders forwards - but his missed tackle count was also the lowest. He conceded only try causes and two line break causes. He was a fairly tidy player in terms of errors (7) and penalties (3) conceded.

In one sense, it is unfortunate for Havili that he is playing at a club which has one of the top three hookers in the world on the roster - and who plays 80 minutes. Hooker is really Havili's best position. While he performs creditably as a bench forward, by the end of the season he'd been forced out of the top 17 by the forward specialists. He was in the top 19 for all three finals games - but did not get a run on game day.

He started at hooker for Tonga in their two end of season Tests against Great Britain and Australia - with the small Pacific island nation producing two stunning wins over their Tier 1 opponents. He played well in both matches, sharing the dummy half duties with Sione Katoa - and that saw him finish the year on a high note.

5-5.5 is where Id have him too. With Hodgo getting the 'C' his 80mins become even more guaranteed, and therefore there was a change in utility philosophy to a back, means Havili seemingly got more reserve grade footy. BUT... still played 22 games. WOW.
Top

Hard to grade Havili as he didn't see a lot of game time, particularly at hooker. Did a decent job when needed to, so 5/10 is fair.
* The author assumes no responsibility for the topicality, correctness, completeness or quality of information provided.
Top

He's good.
If Hodgo is out for a while I have confidence we can win games with Havili there.
It's unfortunate for him that Ricky seems to have changed plans to have a dynamic outside back on the bench if one is available. I agree with that change but it will mean limited minutes for Havili.

I hope he's in the mix as a depth middle forward too. I like his hits in defence and his offload and he busts a lot of tackles. Maybe Ricky will have a period mid season where he reduces Hodgo's minutes for a month or so too?
Top

Tough to play 20+ games and then miss out on a GF. That said not a lot to do for a bench hooker when your starting hooker plays 80, and there are better middle forwards to do that job. May get a bench role with Simmo moving to the starting team next year?
Top

I'd have him as a bench forward over Lui. So much more versatile and he actually makes more post contact metres....well, he seems to anyway.