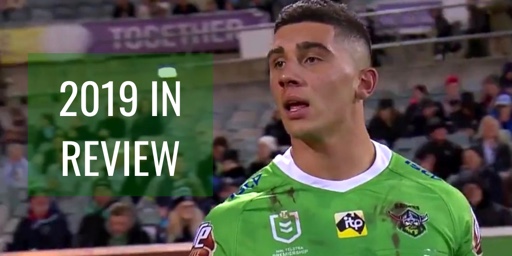 This is the fourteenth instalment of 2019 in review. As usual, now the Raiders' season is over - the best for 25 years - we are reviewing all 26 players who pulled on a green jersey in first grade this year. So far, we've looked at Charnze Nicoll-Klokstad, Nick Cotric, Jarrod Croker, Joey Leilua, Jordan Rapana, Jack Wighton, Aidan Sezer, Josh Papalii, Josh Hodgson, Sia Soliola, John Bateman, Elliott Whitehead and Joe Tapine.

Bailey Simonsson was a Canberra Raiders junior in 2014, playing in the Harold Matthews team alongside the likes of Nick Cotric and centre partner Sebastian Kris. His father Paul Simonsson, a New Zealand rugby union player and North Sydney Bears winger, had settled the family in Canberra - and Bailey played junior footy with the West Belconnen Warriors. When Bailey Simonsson returned to the Green Machine late in 2018, aged 20, he'd played junior rugby league with the Canterbury Bulldogs and rugby union in New Zealand, including with the All Blacks Sevens team.

He signed a development contract with the Raiders just before Christmas last year, after trialing with the club during the pre season. By the time the 2019 season commenced, he'd become a part of the top 30 squad, on a two year deal. Before the 2019 Meninga Medal night was over, he'd shared the Rookie of the Year award with Corey Horsburgh. And just before the Raiders' historic Preliminary Final in Canberra this year, he was rewarded with a long term contract, keeping him in the nation's capital until the end of 2023.

"It’s unreal, I’ve come a long way since signing on as a train and trial deal last year," Simonsson said on the announcement of his long term deal. “I’m grateful that the club has given me the opportunity to stay around and it was a no brainer for me to continue my stay here in Canberra. I've loved everything about the club since the day I arrived here and I never saw myself moving anywhere else. I’ve played a lot more this year than I expected to, it’s been an unreal experience and it’s one that I’m trying to take day by day."

He played 21 first grade games in green - and that certainly is a lot more than anyone would have expected. With Jack Wighton's move to five eighth, he was a contender for the vacant fullback spot - but that went to another new recruit, Charnze Nicoll-Klokstad. Simonsson made his NRL debut on the wing in Round 1 - and he went on to start 14 matches on the flank. He also started five games on the bench, including the Preliminary Final and the Grand Final. He officially played one match at centre, as a last second starter in place of Joey Leilua, who was unable to take the field due to debris from fireworks lodging in his eye. He promptly scored a try. Simonsson also got to play one game in the No. 1 jersey, the final match of the regular season, when Nicoll-Klokstad was rested.

Simonsson played six games for Mounties on the wing and at fullback in the NSW Cup, between Rounds 2 and 7. But after he returned to firsts in Round 8 match against the Panthers, he became a regular member of the NRL squad.

Simonsson scored eight tries, ranking fourth at the Raiders - which is a pretty good strike rate for a player who was often filling in for other players... or injecting fresh legs off the bench. He ranked third at the club for average runs (14 per game), average running metres (114 per game) and line breaks (12). He ranked fifth for dummy half runs (30) and seventh for average tackles breaks (two per match). Obviously, it is fairly tough defending out on the wing, and he posted 10 try causes (third at the club) and nine line break causes (ranked sixth). Only Jordan Rapana had a lower tackle efficiency rate amongst the Raiders backs. That said, he produced some pretty memorable try savers, the best coming in the win over the Wests Tigers at Western Sydney Stadium. He ranked fourth for errors at the Raiders (18), but the number of penalties he conceded were very low.

Through the year I rated Simonsson an average of 5.8/10 - with his overall rating below reflecting a strong contribution to the season. I rated him an "8" in one match, the Round 13 victory over the Wests Tigers. In that fixture he scored a try and made 23 runs for 195 metres, 56 post contact metres, one tackle break, nine tackles - as mentioned, some of the best you'll see from a winger - and two kicks defused. He took man of the match honours in Fans' Choice Player of the Year voting for that match. He also registered Fans' Choice points in the Round 15 loss to the Eels in Darwin. He was strong too in the Round 17 win over the Dragons, the Round 20 win over the Warriors and the Week 1 Finals win over the Storm.

Simonsson capped off the year by his selection in the New Zealand Nines squad and the Kiwis' Test squad. While he didn't play a Test, it was great recognition for a young player. Overall, he's had a very impressive debut season in the NRL. With Jordan Rapana moving on, he's no doubt hoping he might get a shot at a regular place in the outside backs in 2020. The Raiders are reportedly in the market for Storm centre Curtis Scott for next year, so I guess time will tell on that. But, although there are still some things for him to work on, if he gets an opportunity for a starting spot next year, this season has shown he will grab it.

How did you rate Bailey Simonsson's 2019? Tell us below.

6/10. Had a great first year but I think any higher would be just because he was a rookie.
Top

Ferg, I'm a busy jerk, I don't have time to do anything other than scan your post looking for a score, type a response telling you my own score, and then post all day defending my decision or arguing with Matt.

6 seems fair to me.
Had a good rookie yr. Filled in for Rapa really well. A few key off the bench games, esp the BJ firework in the eye prelim.
Top

What did he do wrong to only get a 6? The team didn’t create a whole lot of opportunities for him but he did everything he needed to do exceptionally.
well, I guess you could say that I'm buy curious.
Top

Ferg, I'm a busy jerk, I don't have time to do anything other than scan your post looking for a score, type a response telling you my own score, and then post all day defending my decision or arguing with Matt.

GE which player does this review relate to? You've failed to make the clear in the first post IMO.
Top

Seems like it would be enough. Or even:
Simo 6

(I love the reviews)
Top

Man he did well this season, especially coming into the team the way he did. Credit to him, he had a hell of a year. I don't think we saw anywhere near his best either. We'll see what happens with this Curtis Scott and Leilua situation, but I'm very comfortable seeing Simonsson back on the wing next season.
Top

I quickly became a massive fan of Bailey after the tackle he pulled off vs Tigers at BankWest to save a certain try.

So much so I won the auction for one of his charity jerseys later in the year.

He is developing nicely.

Seems my scoring system is more consistent than Ferg’s!

Brew wrote: ↑
November 27, 2019, 6:58 am
I quickly became a massive fan of Bailey after the tackle he pulled off vs Tigers at BankWest to save a certain try.

So much so I won the auction for one of his charity jerseys later in the year.

He is developing nicely.

Yeah. I had the knock on him early that he was a very elusive/quick 7s player apparently but rarely managed to get into space or break the line in league- they count sneaking over on the end of a backline move as a line break for wingers so some inflation there.

But he did genuinely break the line more often at the back end of the year, against good teams and find himself generally in the open more often through improved game sense. His pound for pound strength and awareness on some of those defensive plays and general "goer" attitude is also excellent.

We don't know this guys ceiling yet, that is exciting. I'm sure I saw him throw a nice, long, crisp cutout ball late in the season too. 7s gets a lot of knocks but 7s players have to develop a decent medium/long range passing game usually that isn't always inherent in league positions. I'm not saying he should move off the wing but it is reminiscent of the kind of varied skill set that made Rapana such a great winger- he could do far more than just dive at the corner.