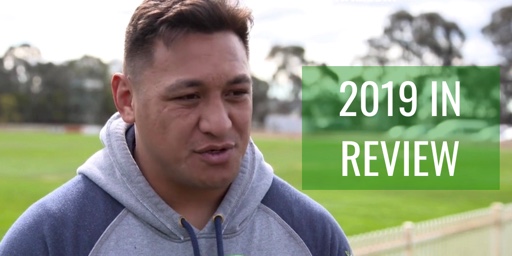 This is the eighth instalment of 2019 in review. As usual, now the Raiders' season is over - the best for 25 years - we are reviewing all 26 players who pulled on a green jersey in first grade this year. So far, we've looked at Charnze Nicoll-Klokstad, Nick Cotric, Jarrod Croker, Joey Leilua, Jordan Rapana, Jack Wighton and Aidan Sezer.

He was unjustly overlooked for Dally M Prop of the Year in my view - and Australian coach Mal Meninga might well agree. Meninga was moved to describe Papalii as "the best front-rower in the game" in August. Papalii re-gained his Kangaroos jersey for the end of season Test matches after three years in the wilderness, likely the first prop picked.

Papalii recently admitted he wasn't sure about the move to the middle, but by the end of the year, he loved it.

Josh Papalii played 26 of 27 premiership matches in 2019, missing only the Round 12 win over the Bulldogs due to State of Origin duties with the Queensland Maroons. He was probably Queensland's best player this year - and most definitely Canberra's best, the Green Machine's most damaging forward.

In 2019, Papalii largely maintained or surpassed his 2018 statistical benchmarks. He made an average of 138 metres from 15 runs per match, second only to Charnze Nicoll-Klokstad for average metres gained at the club. Papalii and John Bateman (105) were the only Raiders' forwards to make more than 100 metres per game on average. Papalii ranked second for running metres gained amongst NRL props, behind only Payne Haas. He broke the 200 metres gained mark in the Round 18 match against the Tigers and the Round 25 clash with the Warriors. He also broke the 150 metre mark in 12 matches.

Amongst the Raiders' forwards, he ranked first for tries scored, fourth for try involvements, first for line breaks and second for tackle breaks behind John Bateman. He was equal first, amongst regular NRL props, for most tries and line breaks, alongside Nelson Asofa-Solomona. His try in the Preliminary Final, to assure Canberra of a Grand Final appearance, will no doubt become a part of Raiders folklore.

In defence, Papalii averaged 25 tackles per game this year, ranking sixth amongst the Raiders forwards. His tackle efficiency rate lifted to 94 per cent (91 per cent in 2018), close to the benchmark for NRL props. His missed tackle average fell to less than one per game (1.5 in 2018). He was credited with just one try cause, two errors and seven penalties conceded in the whole season. That's incredibly consistent and disciplined.

I rated him an average of 7.5/10 per match through the season and ranked first in the total points tally. My rating below reflects his overall contribution to the Raiders' season. I rated him an "8" twelve times and a "9" once - in the Preliminary Final against the Rabbitohs. In that game against the Rabbitohs he scored the winning try and produced 18 runs for 179 metres, 57 post contact metres, one line break, seven tackle breaks, two offloads, 35 tackles and 92 per cent tackle efficiency.

Papalii took out Canberra Raiders Fans' Choice man of the match honours in six matches. He performed very strongly in the narrow losses to the Roosters and Rabbitohs in Rounds 9 and 10... and followed with outstanding games against the Roosters and Storm in Round 21 and 22... as well as the Round 25 clash with the Warriors. He was also man of the match in Canberra's historic Preliminary Final. He was not only voted Canberra Raiders Fans' Choice Player of the Year, but also the Player of the Finals.

It was an extraordinary season for for a player who is now Canberra's leader of the pack.

How did you rate Josh Papalii's 2019 season? Tell us below.

Single handedly ensured we went to the big dance.

I know getting a 10 is basically impossible, but there has to be an argument for Papa this yr. I think 9 is too low, so I say bump him to 9.5.

Thrived with his permanent shift to the middle. Arguably best prop in the game.
* The author assumes no responsibility for the topicality, correctness, completeness or quality of information provided.
Top

10/10. I don't know how a front rower could possibly play better or have more influence on results.
Top

I understand a 10 is near impossible, but I do t know what more he could have done this year. Sensational.
Top

10 is impossible... and while I think he’s the best prop all round... he wasn’t the benchmark prop in every key statistic, not even the majority of them. He actually rounds up to a 9 under the formula. 0.1 less, he would have rounded down to an 8.5. Though the formula is of course subjective as to the weighting given to contribution to season.

If you were statistically deriving the score 10 should be impossible, but these scores are subjective. There's a range of performance within each score.

*edit* ok, I see why it's near impossible under your method
Top

He has a season to put on the shelf alongside anything Backo, Lazarus, Wiki ever produced. That's the top shelf, btw.
Top
Post Reply
12 posts • Page 1 of 1