2019 Fans' Choice Player of the Finals 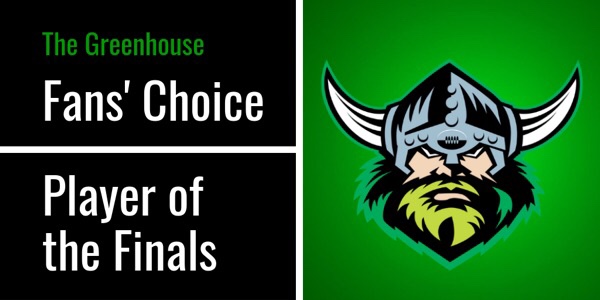 The Fans' Choice Player of the Year has been decided. And now we are at the business end of the season, and we are voting on the Player of the Finals!

Sent from the Greenhouse mobile app

2 - Wighton
2 - Croker
1 - Papalii
1 - CNK
Get Stuart to realise he is holding the club back and step down to player manager!
Top

2 - Wighton
2 - CNK
1 - Papalii
1 - Croker
Some people talk about the weather. Others do something about it.

Guler won’t poll any votes but I thought he was great in limited time. Positive signs for the future.

Me too. Some other good performances in their as well.
Top

3 CNK
2 Wighton
1 Paps
* The author assumes no responsibility for the topicality, correctness, completeness or quality of information provided.
Top

All fair points allocations but I thought Hodgson was excellent too.
Top

Same for me thanks
Top

Would go 3-3-2-2 if I could, and give Whitehead and Croker 1 each for being literally everywhere.
Top

The following players have picked up points towards the 2019 Fan’s Choice Player of the Finals award in our Grand Final loss to the Roosters.

Thank you to all who voted.