The Rugby League International Federation (RLIF) is delighted to announce that England has been awarded the rights to stage the 2021 Rugby League Men’s and Women’s World Cups.

Following an exhaustive process, which included strong competition from other nations, the non-conflicted Directors of the RLIF Board met on 18 October to review presentations from the two shortlisted bidders, England and the Moore Sports International (MSI) USA/Canada Bid.

Bids were assessed against seven criteria provided in the bid documentation.

The MSI USA/Canada Bid scored impressively in many areas, including but not limited to, the support of the RLIF strategy to extend the global reach of Rugby League as well as in marketing, commercial support and innovation. The Board, acknowledging the strength of the MSI USA/Canada bid, made the decision to recommend to Congress in November the award of the 2025 Rugby League World Cup together with, subject to further evaluation, an Inter-nations tournament to MSI USA/Canada to be played between the 2021 and 2025 World Cups.

Ultimately, England edged out the MSI USA/Canada Bid for the 2021 RLWC, primarily based on the current Rugby League participation numbers in North America.

With specific reference to the England Bid, which is built upon achieving a spectator attendance in excess of one million and the delivery of a £10 million capital legacy programme, this will be of massive benefit to our sport. England staged an outstanding World Cup in 2013 and have clearly outlined their vision for the 2021 World Cup as a World Class event eclipsing the attendances, reach and legacy of 2013. The bid details that the Rugby League World Cup will be the highlight of the international sporting calendar in England that year and RLIF looks forward to a great tournament.

The MSI USA/Canada Bid provided the RLIF with an unprecedented opportunity to take Rugby League’s pinnacle Event, the World Cup, to the commercially lucrative and passionate sports audience of North America. As outlined in the Bid presentation, significant opportunities with regards to Rugby League development at both the elite level and even more extensively at the junior levels of the game, gave MSI USA/Canada’s Bid extremely compelling qualities.The bid process was highly competitive and the Board was very impressed by the MSI USA/Canada bid which was of the highest quality. The RLIF sees a great future for the sport in North America and has recommended that discussions with MSI are expedited to bring professional Rugby League to North America as well as future international tournaments. Those discussions are being progressed with MSI USA/Canada and a report will be presented to Congress which will be held on 19 November this year.”

What a stupid decision. Grow the game you morons
Dont delete this GE
Top

Be cool to see the World Cup in North America, as long as they had a commitment to increase RL at the grass roots level.
Top

Can't see it being feasible to hold it North America unless they do a helluva lot of work on the local competition and grassroots, on top of the existing professional comps being able to penetrate the TV market over there.

RLIF would be shooting themselves in the foot hard otherwise.
Top

They were talking about staging it in NFL venues. I'd go.

Jon Dutton, RLWC2021 CEO, says 39 towns and cities across England had expressed interest in hosting matches during the 2021 World Cup – a tournament that has received GBP25 million in government funding.

Many other key details have already been decided, including:

• the number of competing nations will increase from 14 to 16;

• the tournament will run concurrently with eight-team Women's and Wheelchair World Cups;

• games would be spread across the week and not just played on weekends as they were at RLWC2017;

• the maximum number of venues permitted by the Rugby League International Federation to stage matches will increase from 12 at RLWC2017 to 14 in 2021, and;

• 80 per cent of matches would be played in the code's northern heartland, with Hull, Leeds, Liverpool and Manchester almost certain to be among the host cities.

USA needs more time to develop the game. No way people are going to attend games in 2021 to watch their home country get flogged.
'I've got 17 blokes in that dressing room that are hurting'
Top

USA needs more time to develop the game. No way people are going to attend games in 2021 to watch their home country get flogged.

Agreed and the RLIF still needs to develop and earn more revenue. That's why they went this way.

However after RLWC2017 they need more games for all nations. Especially in the Pacific between Tonga, PNG, Samoa and NZ. 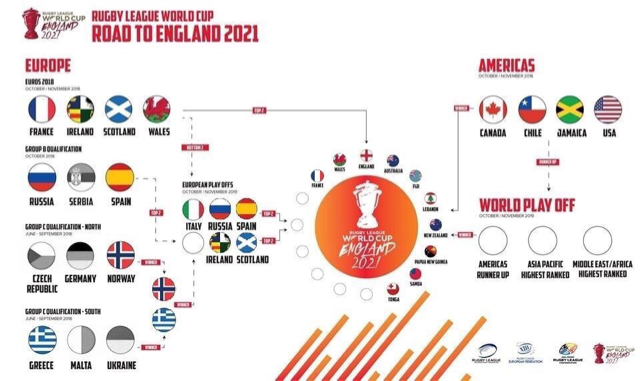 Hosts England will open the 2021 Rugby League World Cup and will be seeded alongside titleholder Australia, New Zealand and Tonga.

Details of the draw have been unveiled following a four-day congress of the Rugby League International Federation in York.

The Rugby League World Cup has been increased from 14 to 16 teams, making for a simpler format, with the top two teams from each of the four pools going through to the quarterfinals.

The European play off at the end of 2019 will deliver four more countries:

The World play off at the end of 2019 will see one more qualify:

Set to be the most inclusive rugby league event ever, RLWC2021 will see the men’s, women’s and wheelchair tournaments played concurrently for the first time. Another UK first will see the women’s and men’s finals take place as a double-header at Old Trafford, and further west, Liverpool’s M&S Bank Arena Liverpool will host the wheelchair final.

Coventry – The Ricoh Arena will host one men’s game.

London – The Emirates Stadium will host a men’s semi-final. The Copper Box Arena will host the England group in the wheelchair tournament.

The Kangaroos and Jillaroos are set to be based in Leeds for the 2021 World Cup and could play at some of England's most iconic football stadiums after venues for the 16-nation tournament were announced.

The USA Hawks and Cook Islands Kukis have announced their squads for the qualification game to decide the 16th and final place at Rugby League World Cup 2021. The game will be held in Jacksonville, Florida on November 16th.

Meanwhile, Greece put in a magnificent display against Scotland last weekend before finally losing out in the final quarter. That result secures Scotland’s place at RLWC2021 where they will be joined by Italy who secured their place by consigning Spain to their second consecutive defeat. A result that also guarantees qualification for Ireland.

Greece will now travel to Belgrade on Saturday to face Serbia. They will arrive as favourites, but Serbia could still qualify if they win by a large enough margin.

Greece have created history in fine style by thumping Serbia in Belgrade to advance to their first World Cup.

The Greeks qualified for the 2021 tournament in England with an 82-6 rout over the Serbs following their recent 42-24 loss to Scotland.

Cook Islands survived the second-half sin-binning of St Helens forward Dominique Peyroux to storm home against the United States and claimed the 16th and final spot at the 2021 Rugby League World Cup. The Kukis ran out 38-16 winners. The Cook Islands, Jamaica and Greece have all qualified for 2021, after not participating in 2017.

If you watch just one of those videos... watch the one about Scotland and Greece.

I loved the passion in all of those videos. Made me proud, made me choke up.

World Cup organisers have secured a coup, announcing that Prince Harry will host the draw for the 2021 tournament at Buckingham Palace on January 16.

On the same day that he and wife Meghan revealed plans to "step back as 'senior' members of the Royal family", the Duke of Sussex was named to perfom the draw at the iconic venue. 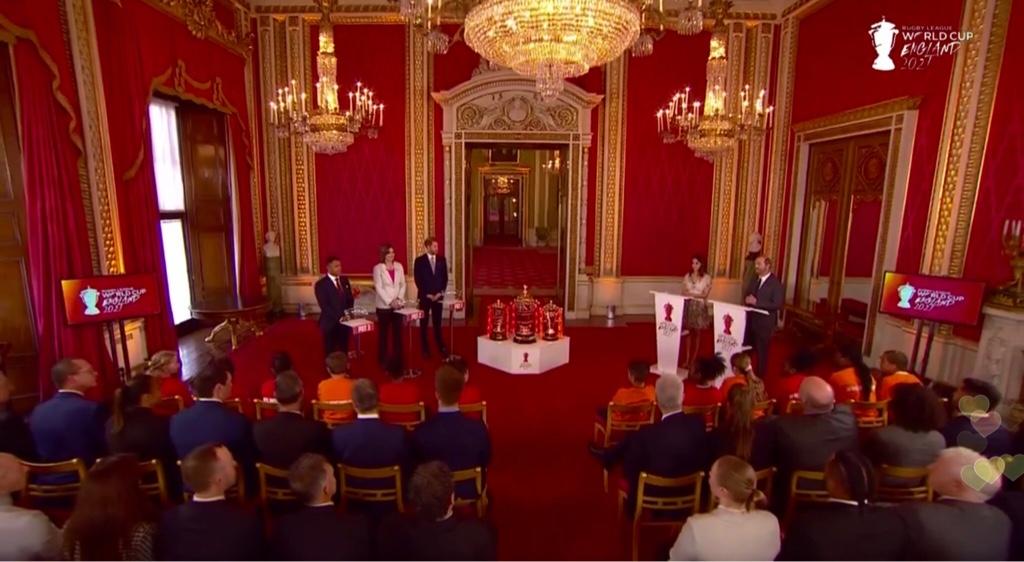 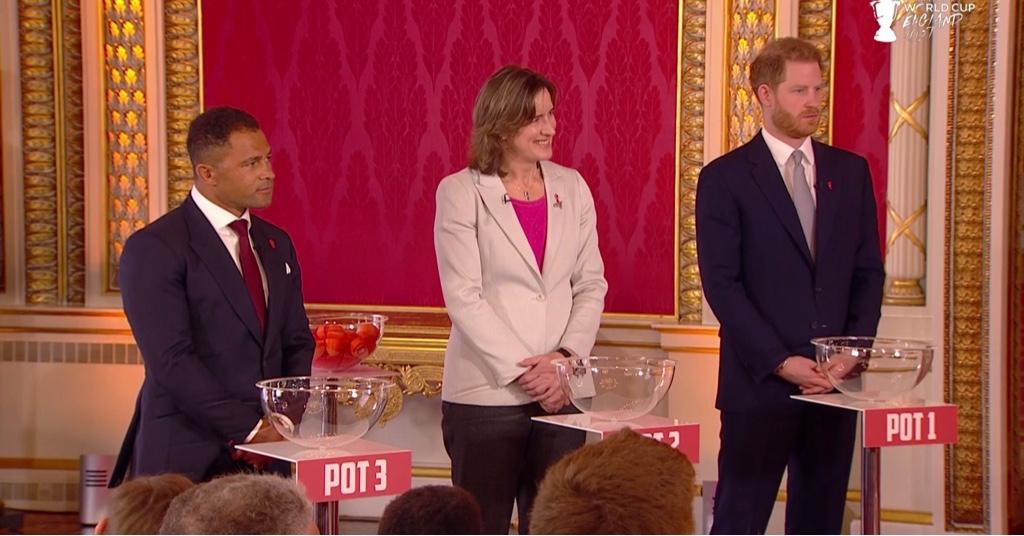 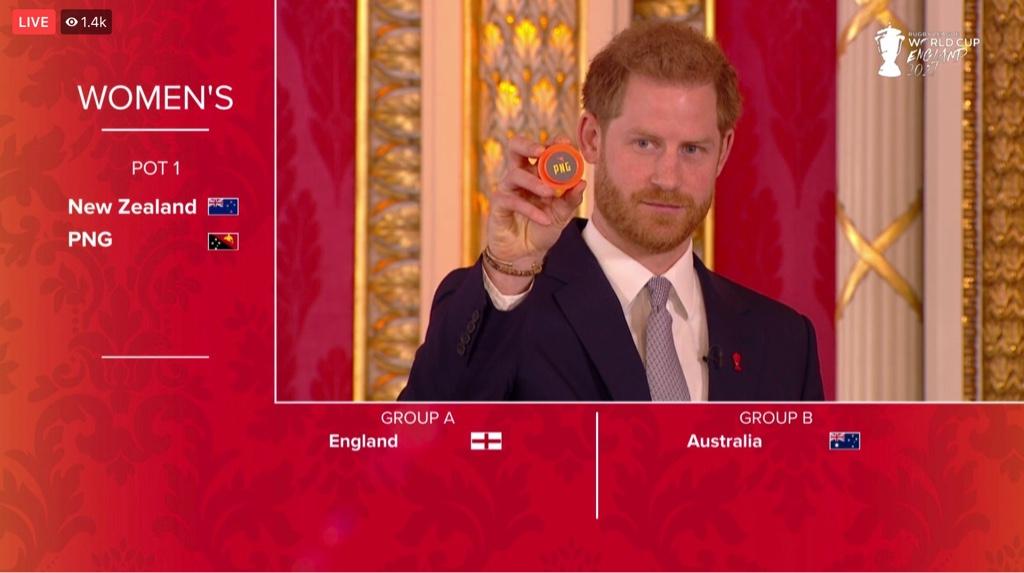 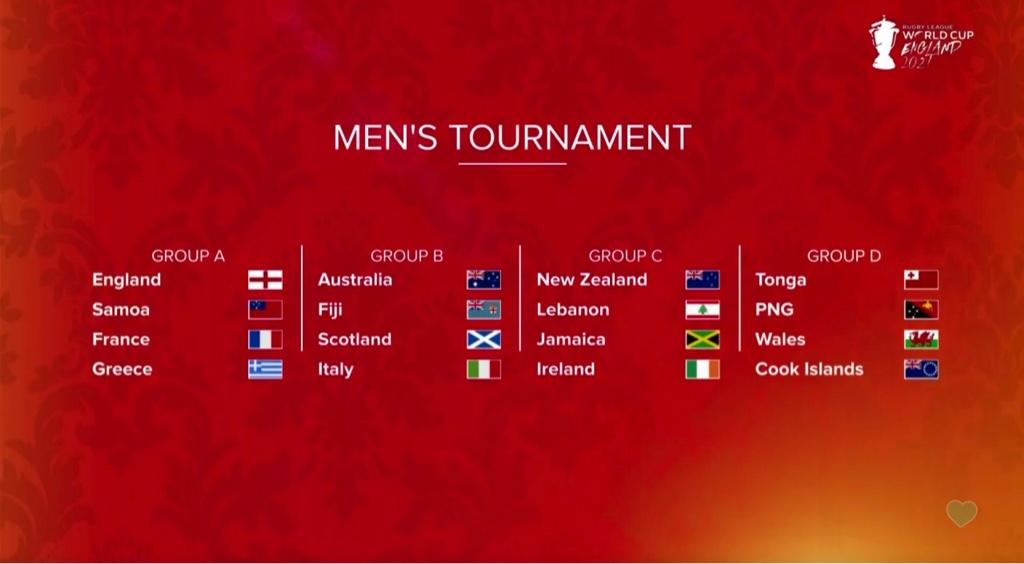 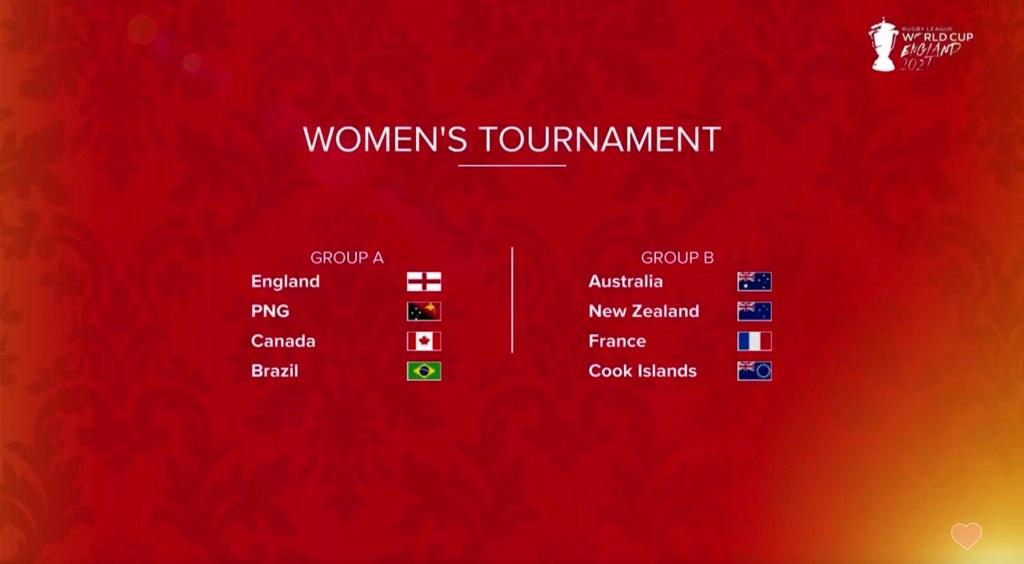 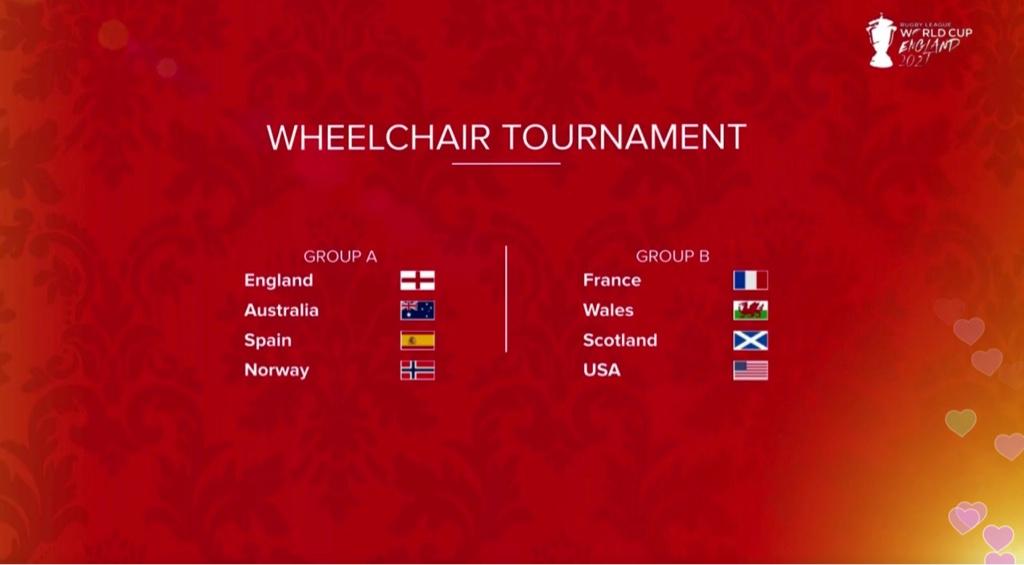 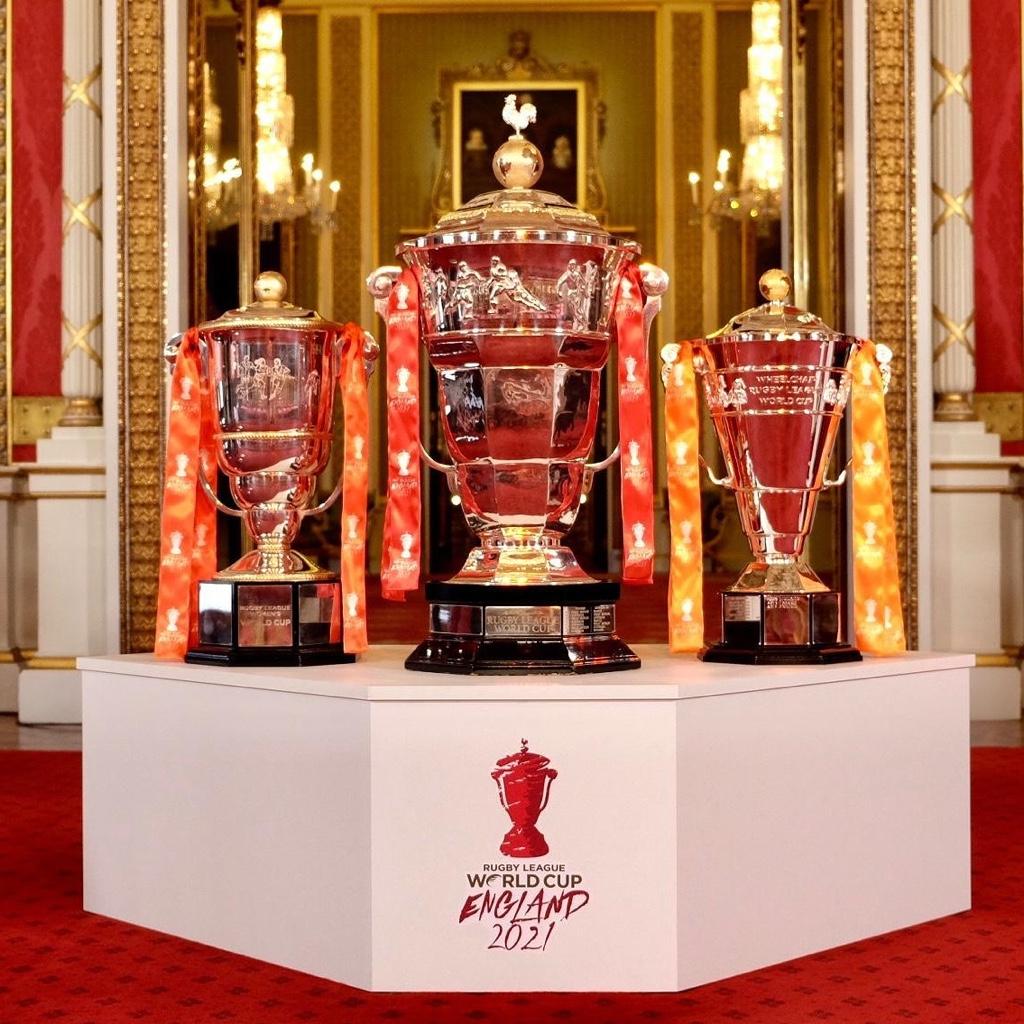 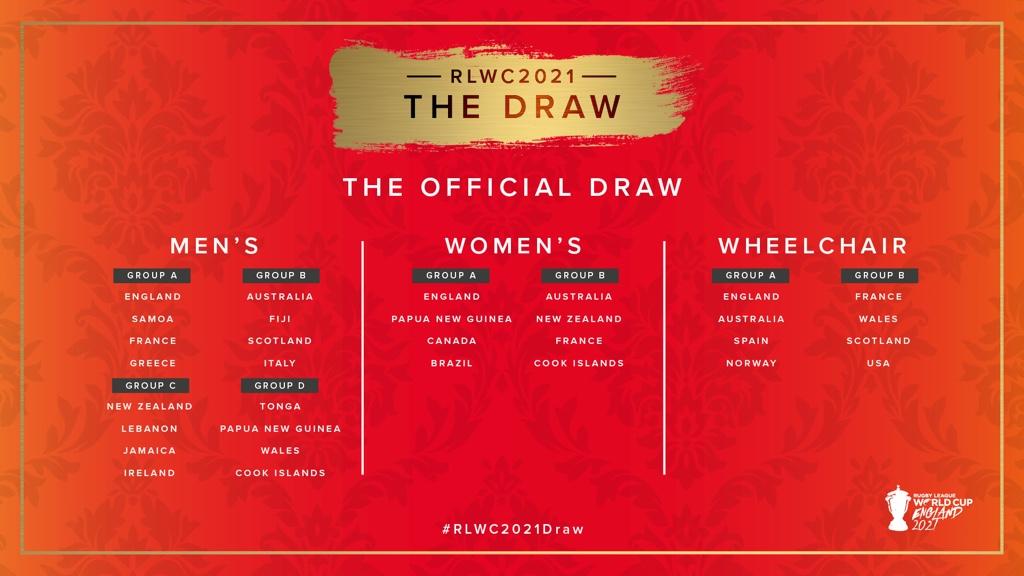 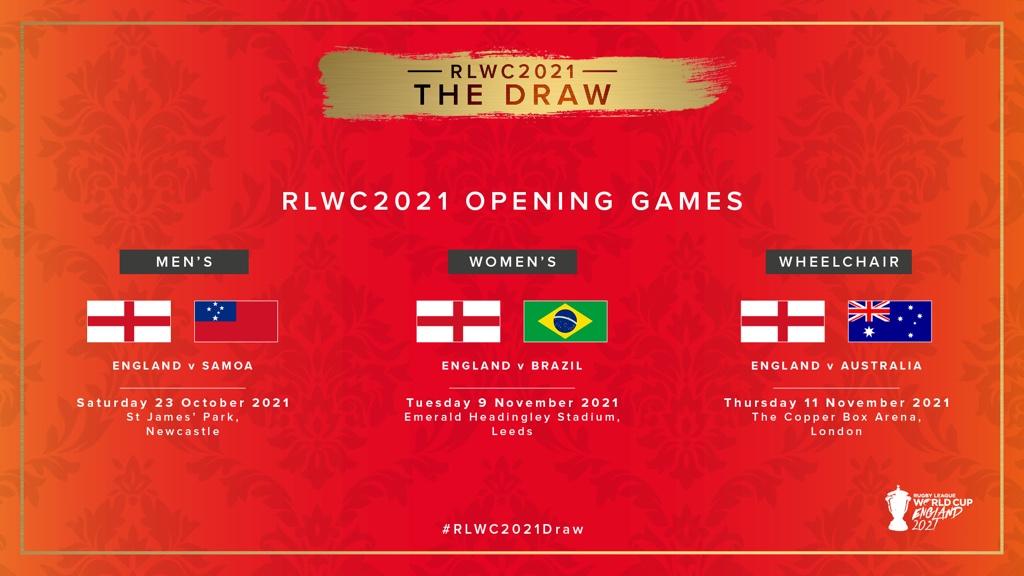 Sent from my iPad using Tapatalk