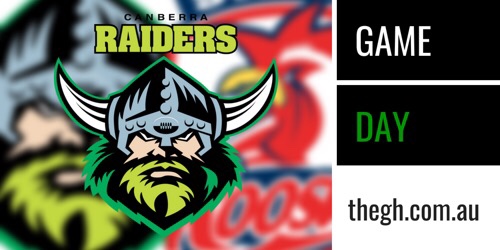 Round 8 2019. Canberra Raiders 30 - Penrith Panthers 12. It was gutsy and determined. The Raiders went into the match with Jordan Rapana and Joe Tapine sidelined long term with injury. Joey Leilua was forced to withdraw on the day of the match. During the game, John Bateman - one of the Raiders' best players this season - suffered a fractured eye socket. Canberra weathered that adversity. Canberra weathered the adversity of being reduced to 12 men, with Charnze Nicoll-Klokstad sin binned - not conceding a point. The intensity was back, the defence was tough. And the points flowed on the back of that.

In Round 9, the Canberra Raiders head to Brisbane for a meeting with the ladder leading Sydney Roosters at Lang Park, in Magic Round. Jordan Rapana (ribs) returns to the Canberra Raiders starting line up earlier than expected, but Joey Leilua (neck) has been ruled out of the match, with Michael Oldfield retained at centre in Leilua's place. Bailey Simonsson is surprisingly named on the interchange bench, rather than the extended bench. Hudson Young comes into the team, with John Bateman on the sidelines for six to eight weeks with a fractured eye socket. For the Roosters, Matt Ikuvalu has been named to make his return on the wing, with Joseph Manu moving back to centre and Mitchell Aubusson to the bench.

Late changes: Jack Murchie (who appears to have a hand/wrist/arm injury) and Royce Hunt have been omitted from the Canberra Raiders squad of 21 to face the Roosters, while Emre Guler and Aidan Sezer remain on the extended bench. Josh Curran and Lachlan Lam dropped off the extended bench for the Roosters.

History: The Raiders have won 28 of 61 matches against the Sydney Roosters. The Raiders have endured some long losing streaks against the Roosters since the turn of the century. But Canberra has now won six of the past 10 matches, including the last three straight. The Raiders won 21-20 in Round 2 of 2016 and 24-16 in Round 12 of 2017, with both matches played at Canberra Stadium. They followed that up at home in Round 23 last year, beating the ultimate premiers, 14-12. The Roosters scored two tries to one, but Sam Williams kicked five goals, in one of Canberra's most impressive performances of 2018.

The Roosters are on a seven game winning streak, winning 42-12 against the Wests Tigers in their last outing and producing a dominant performance. The only game the Roosters have lost this season was in Round 1, to the Rabbitohs, 26-16.

Betting: The Roosters are raging hot, $1.35 favourites in the match, while the Raiders are paying $3.25. The Raiders have 8.5 point start in the line betting. The Raiders' odds have lengthened over the course of the week.

The Raiders have the better average completion rate of the two teams (77 per cent, Raiders 72 per cent). The Roosters produce more errors per game (13-10), but the Raiders have been less disciplined - conceding eight penalties per game on average, the Roosters six. In fact, the Roosters rank second in the league for errors and first for handling errors (10 per game), while the Raiders are now the most penalised team in the league. Both teams have averaged 52 per cent share of possession.

The Roosters make slightly more runs per game (176-169) and more running metres gained (1676-1527). The Roosters rank fourth for post contact metres (465 per game), the Raiders eighth (445 per game). There is not much difference in kick return metres (Roosters 193 per game, Raiders 188). Canberra ranks third for tackle breaks (33 per game), while the Roosters rank 12th (30) - but there's not much difference there either. The Roosters rank fourth for line breaks (4.3 per game) while the Raiders are middle of the pack (3.5). Both teams average around eight offloads per match. Canberra relies heavily on dummy half runs (17 per game) ranking first in the competition (Roosters just nine).

According to Fox Sports Lab, the Raiders now rank third for least running metres conceded (1324 per game), the Roosters eighth (1382). The Raiders have missed an average of 31 tackles per game, the Roosters just 25 - with the Roosters having a slightly better tackle efficiency rate.

Our tip: The tests continue to become more and more challenging for the Raiders. The Roosters are in red hot form, while the Raiders have a mounting injury toll. The Green Machine has Joe Tapine, John Bateman and Joey Leilua on the sidelines. The Roosters have also lost hooker Jake Friend to serious injury. But they still have an intimidating "spine" with the likes of Luke Keary (ranked first for try assists, with 10) and James Tedesco (ranked first for tackle breaks and third for running metres) in top form. On top of that, they have Cooper Cronk pulling the strings. Latrell Mitchell carving is up out wide and he is now the leading point scorer in the NRL - with six tries to his name. It will be a very difficult task for the Raiders to win this one.

The only way they'll do it, is for the Raiders to be at their most intense and to bring their very best defensive game - and hopefully smother the Roosters out of the match. Canberra must keep the penalties and errors to a minimum - and frustrate the Roosters into their own errors. They'll need to play just as they did against the Roosters last year.

Let's not forget that the Raiders have some of their own in very good form. Josh Hodgson was back to his best last week, Jack Wighton is dangerous in attack at five eighth, while Charnze Nicoll-Klokstad is having a break out season at the back. The Raiders have their own point scoring maestro in Jarrod Croker. And the Raiders still have some weapons in the forward pack - with Elliott Whitehead and Josh Papalii having immense games last week. The young forwards, led by Ryan Sutton, will need to stand up. If all that comes together, the Raiders certainly have the capability to win. If I'm tipping with the head, based on form, I'd have to say Roosters by six. Tipping with the heart, I'll say Raiders in a close one.

Josh Papalii on the loss of John Bateman: "It's a massive blow, he's been a big reason why we've been so successful at the start of year. We've got some good youngsters coming through and that are playing good footy for the Mounties like we saw with Hudson Young on the weekend who went into that position and did a really good job."

The Panthers?
Gina Riley: Oh, come on, John. That’s a bit old hat, the corrupt IOC delegate.
John Clarke: Old hat? Gina, in the scientific world when they see that something is happening again and again and again, repeatedly, they don’t call it old hat. They call it a pattern.
Top

They were last week.

It is my permanent state, NR.
Top

It is my permanent state, NR.

Fair call
* The author assumes no responsibility for the topicality, correctness, completeness or quality of information provided.
Top

Based on nothing but a hunch I think we might see Sezer on the bench.
well, I guess you could say that I'm buy curious.
Top

I doubt I can watch the game today... Mother’s Day lunch and gatherings. Hopefully I can sneak a look.

Cmon Raiders!
Sezer was training with the team on the captains run yesterday, smokescreen?
Top

We will need to be at our very very best.

And hey..the Rooters are due !!

I'm with Dustbuster, taking Mrs Bone out to lunch with the Dragon lady.
Edrick The Entertainer
Top

I'm with Dustbuster, taking Mrs Bone out to lunch with the Dragon lady.

Have a great day boner..

If we can just keep Mitchell, Tedesco, Cronk, Keary et al contained, we will be sweet!
It's a simple game; tackle, back-up, pass, hold the ball! What did I say? "Hold the bloody ball!!"
Gold member 2020
Top

That’s important but I feel the real key to winning this match will be to score more points than the Roosters. If we do that I’m confident we’ll win.
* The author assumes no responsibility for the topicality, correctness, completeness or quality of information provided.
Top

I agree - I think we need to ignore all the noise about "containing Mitchell/Tedesco/Cronk etc" and just do what we do. If we let ourselves treat this too differently we psych ourselves out.

Game day vikings! Let's go!
And to all the people who doubted me, hello to them as well. - Mark Webber, Raiders Ballboy and Unluckiest F1 Driver Ever

Big props from Chad Townsend for Cappy on the Sunday Footy Show just then.

I'm very concerned about us having enough points in us today

I can't see us scoring more than 1 or 2 tries at best.

Very tough day at the office coming up

Welcome to our coverage of today’s Magic Round clash between the Canberra Raiders and Sydney Roosters From Lang Park! The Raiders and Roosters are 1-17. Here are the final teams:

That’s important but I feel the real key to winning this match will be to score more points than the Roosters. If we do that I’m confident we’ll win.

Agree. No one has ever lost a match scoring more points than the opposition..
3rd Battalion Royal Australian Regiment..Old Faithful
#emptythetank

That’s important but I feel the real key to winning this match will be to score more points than the Roosters. If we do that I’m confident we’ll win.

Agree. No one has ever lost a match scoring more points than the opposition..

The Storm have...
Top

Don’t the final 17 get called an hour before kick off?

I don't see Simonsson getting on

Sent from my Pixel 2 using Tapatalk What role does Simmonson play? Oldfield might not play 80, Cotric to centre?
Sometimes the light at the end of the tunnel is just the train that's about to hit you.
Top

I am nervous nelly