Merry Christmas 2016 and Happy New Year 2017 from The Greenhouse It is that time of year again... time to wish all the members and followers of The Greenhouse a very Merry Christmas and Happy New Year. It was an amazing 2016 for the Raiders, record breaking in many ways. Longest winning streak in a single season; best finish since 1995; most points scored in a season; Jarrod Croker took the club point scoring record of all time; and Jordan Rapana broke the club record for most tries in a season. Add in the Viking Clap and the first Preliminary Final in the NRL era and it was a good season. All it was missing was a Grand Final appearance and...

It was also a record breaking season for The Greenhouse. We now have almost 3,200 members of the forum, over 25,000 followers on Facebook and over 6,000 on Twitter. On all our social media platforms, including Instagram and Pinterest, we have more than 43,000 followers.

It's thanks to you, the members and followers of the site, for continuing to make The Greenhouse the number one Canberra Raiders supporters website! Merry Christmas and Happy New Year to you all!

Here's hoping for that long awaited premiership in 2017!

Same to you EJ!

Best one yet, even cloned Sezer!
Top

Oh dear. Just as well we won't use that one then!

Happy Christmas GE and all the participants, I think we have a good New Year coming up and I am looking forward to sharing it with you all.
Thank you once again GE for running this site, you do a great service.
Top

Merry Christmas to you and your family too COM!

Id like to wish you all a happy Christmas and safe new year. From my small piece of this great country to wherever your small piece is have a great holiday.

Have a great festive season GE and also to all on the GH and everyone who wants the Raiders to win.
Top

Same to you RedRaider and all your family!

Merry Christmas and a Happy New Year to all the Greenhousers.

Santa has been working on our present for 22 years now, so let's hope that sucker is finished and gets delivered tomorrow.
Top

Have a great Christmas, Hanukkah, Festivus, Saturnalia or whatever you wish to celebrate at this time of year and an awesome new year to everyone

I bow down to thee oh great Nickman, the wisest of the wise, your political adroitness is unsurpassed, your sagacity is unmatched, your wisdom shines through on this forum amongst us mere mortals as bright as your scalp under the light of a full moon, never shall I doubt your analytical prowess again. You are my hero, my lord, my savior, may you accept my offerings so you continue to bless us with your genius.
Top

Seiffert82 wrote:Merry Christmas and a Happy New Year to all the Greenhousers.

Santa has been working on our present for 22 years now, so let's hope that sucker is finished and gets delivered tomorrow.

If not I'll grab my pitchfork and meet you there!

Merry Christmas to all in green.
Top


Sent from my iPhone using Tapatalk
Co-host of The Dad Zone Podcast http://bit.ly/thedadzone 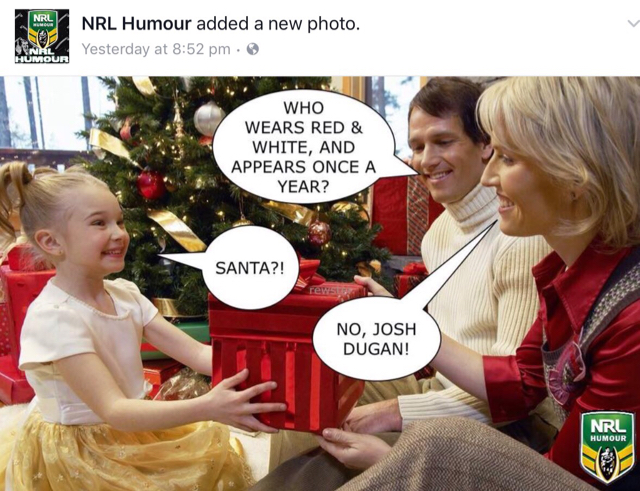 Got the training shorts and polo

I've got to buy my own Raiders gear. The wife thinks I have more than enough and refuses to add to it.
3rd Battalion Royal Australian Regiment..Old Faithful
#emptythetank

This was the best present I got all day, thankyou for the chuckle!
Top

Hope you had a great day Stagtime.
Top

Hope you had a great day Stagtime.

Hope you had a great day Stagtime.

Just returned to Oslo from Roros and would recommend it to everyone. 1880's village,150mm of snow overnight (First time we have seen snow falling) and then a half day dog sled ride. Had my Raiders jersey on for a photo but at -10 wasn't game to take the suit off! Back to London for New Years, wishing everyone a great New Year and a successful upcoming season.
Top
Post Reply
42 posts