All things Legends of League in 2015.

Hopefully the quick draft returns to these comps, last years 3 stages of every man for themselves draftng was a little full on

at least you get a chance to breath in the quick draft at least for 30 seconds maybe haha.

First of all I'd like to say congrats to aussie1st, he won the Allan Langer Tier 2 comp and has been promoted to the Champions League with the big boys

Myself and RRA finished top 4 in the Mal Meninga comp and stayed safe to have another crack this year, I did have 2 chances to make the GF but as usual crashed and burnt in the finals

won my firsts final against the guru in week 1 and then lost a few players to the ASADA **** BS and it killed my team and out the back door I went.

Anyone of the top 4 teams could of won that comp, its on this year thats for sure, time for revenge.

Thes comps are 8 team comps with promotion/relegation. The winners of each Tier 2 comp go up to the Champions League, 5th-8th in Tier 2 go down to Tier 3, top 4 in Tier 3 go up to Tier 2.

So not as many spots will be open to the public for Tier 3 comps this year, if you want to join when it opens you will have to be quick.

Some of you should try join a comp, it is fun and something different playing against different players and a guru, you can learn a lot from watching how others play, and its good fun, the scoring is a little different from out comps but you ajust.
Top

Great to have the season back up and running again. Hopefully go better this time round in the Champions league, had a pretty average one first time round. Emus is in there again so getting sledging from two leagues now!

Good luck to all for this season, do the GH forum proud!
Top

Hi boys. I know I don't pop in here very often, but very glad to see you all so keen for the Legends of League Comps again.

We're obviously much more confident in our product now so if any of you remember the old site, scrap that in your minds - it's 10 times better now.

A big thanks to Millsy as always for organising you all, but looking forward to getting back up the Champions League myself again for next year! 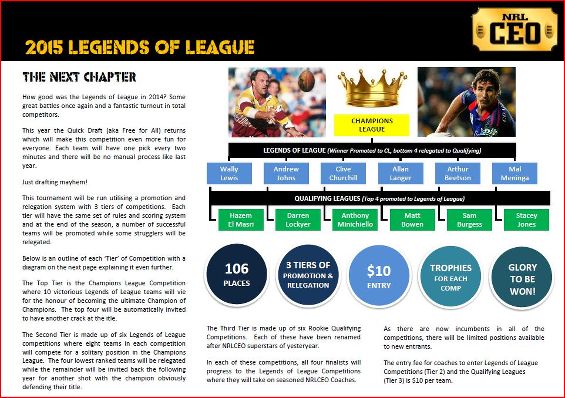 Legends of League invites will be sent out this week, with intentions of kicking off drafting next weekend.
Top

The invites back to LoL is for players who were in comps last year.

Tier 3 comps will only have a limited amount of available positions this year, so if you are keen to join this year, be quick when those comps open.

I'd like to see a few more guys from Div 1 join a LoL comp if you have time for another team, It is only 8 teams in each comp, 22 player squads and the quick draft of course, top 4 in Tier 3 will be promoted to Tier 2 next year.
Top

Champions League underway, interesting seeing Josh Jackson picked up in first round. First pick Farah, second pick by Emus Segeyaro so had to get myself Smith.
Top

Keep us informed how your team shapes up mate.

Can see the step up already all the big gun forwards already disappearing and I'm still to get my 2nd go!
Top

LOL kicking off this week, anyone in the two comps to have done picks so far?
Top

Drafting going on now for Allan Langer comp. Nerves as usual but 2 from 2 with my picks so far.
Top

We have our draft tonight
Top

That draft went prety much perfect for me, i didn't get kicked in to anyone elses profile this time

That was the best draft I've done, that was so fun.

I got most of the forwards I wanted, Farah, McGuire, Woods, Jackson, Myles, JWH and Harris, it was a bonus getting Wade Graham and pinching Fenno infront of Rra

It did go very smoothly. Less pressure when there is only 8 teams. Plenty of players to choose.

Just had to remember it is only a 22 man squad , which I didn't and left myself short of backline depth.

Hopefully Rapana gets a wing spot and after 3 games gets graded as a winger. And RTS isnt a winger either

Anyone wanting to join a Tier 3 LoL comp, Nrlceo will be sending out an email later on for ppl to join.

You will need to be quick I'd say, they are 8 teams per comp, 22 player squads with 10 kicker points.

The comps use the quick draft with 2 minute picks each round.

The top 4 will be promoted up to a Tier 2 comp next yr.
Top

The comps are now open, you should all have an email.
Top

Join up guys, Stacey Jones is alined with the Mal Meninga comp.
Top

If I'm going I'm taking you with me

Joined up for Darren Lockyer
Top

Only 6 active teams, one computer club and one guy spat the dummy a few rounds in. I didn't know it was 22 until the final whistle, had to make a cut to get my goal kicker!
Geez how did you get that team Millys! Your whole forward pack was gone by round 2 in my league!

Backrow could be stronger, depending on things going right there.
Top

Backrow really suspect here and a few backs who are iffy.
Top

@Aussie I'm rather happy with my pack

the best forward pack I've ever had in any comp I've done.
My first 6 picks in the draft were my starting pack, the new fish must of all went for the star havles/backs in the early rounds - big mistake for them

We don't have an nrlceo guru in our comp, Bona joined the wrong comp

Myself or Rra are big chance to taking it out this yr with some luck of course.

Your teams look good as well, I bet the champions league draft was tough, all the best I hope you do well.
Top

Check out our teams and try follow suit with your draft mate.

Draft your starting pack in the early rounds, then your spine and backs, after that a few more back rowers/prop ect.. WH forwards scoring well each week is the key to LoL, the star halves don't have as big an impact with try assists only worth 2 pts.

With luck my backs have points in them, no depth there which may hurt. Might organise a trade there at some stage.

Graham is my lynch pin. 1st pick. Pretty happy with my pack too.

It should be a good comp. 7 teams.

Not sure if Dexta can join now to make 8 and pick a team with whats left.
Top

Anyone can be named on the bench but only Bench 1 and 2 are eligible for Workhorse Tries.

So legends is different to theGH Premiership comp ?
Top

Yeah our comp is different this year

Remember I set up our comps haha I thought it would be a nice change having 3 forwards and 1 back on the bench, more like the nrl teams do.
Top

Yeah thats cool. It just caught me out with LoL. I'll just need to remember that for during the year
Top

Not sure if i'm happy or not

Joined up to the Stacey Jones comp as Nunchuck Wielding Mallards

Stacey Jones draft this afternoon, can't find out how many available kicker points each team gets, is it $15?