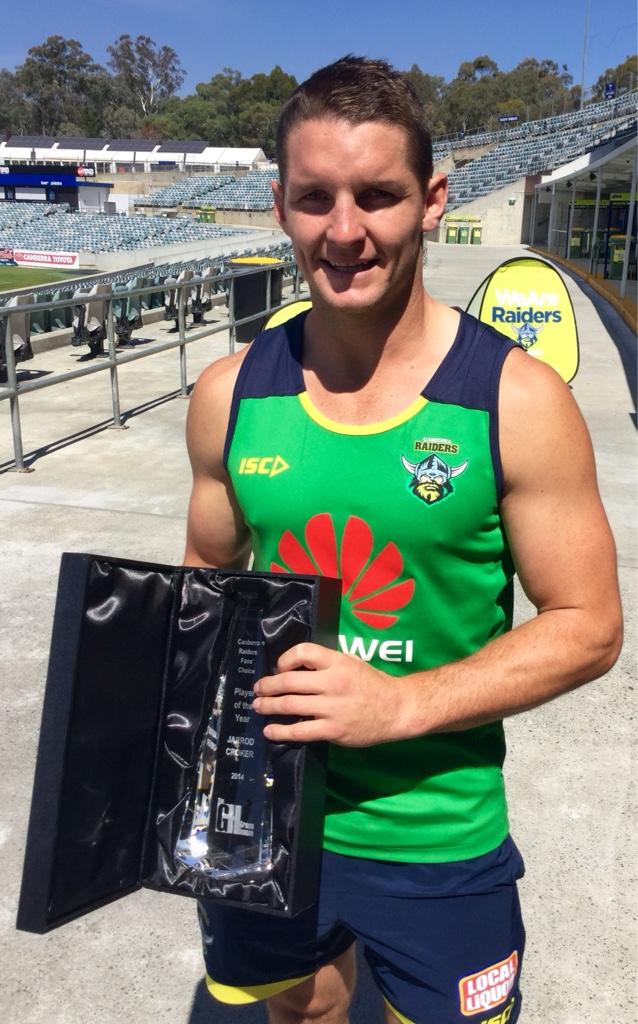 Blake Austin led the voting for much of the season, but Hodgson overtook Austin in Round 22 in the match against the Wests Tigers and held his lead to the end. He tallied 22 points over the season.

In the Raiders' win over the Panthers in their final home game, Hodgson was awarded two points and took an unbeatable lead - while Blake Austin's season unfortunately ended when he left the field with a season ending shoulder injury.

As the Player of the Year, Josh Hodgson also takes out the Fans' Choice Award for Canberra Raiders Forward of the Year.

Josh Hodgson now looks to be the answer. Before joining Canberra, Hodgson, aged 25, had already played 127 games in the English Super League, two for Hull FC in 2009 and the remainder for Hull Kingston Rovers between 2010-14. He was co-captain at Hull KR in 2014 and ended the season by winning the club player of the year award.

Raiders fans had heard relatively little of him when he was signed by Ricky Stuart. He represented England in two Tests at the end of 2014 in the Four Nations tournament. It's fair to say he did not show his best form at that level - but he was nevertheless solid and his good dummy half running was on show.

He probably made an even bigger splash when a video went viral: him crashing through a door at a party while in New Zealand on that tour. He apologised to the landlord, paid for the door, and impressed Raiders fans by then turning up to Canberra pre season training as soon as he could after the Four Nations. He worked hard on his fitness in the pre season in order to handle the faster pace of the NRL - and by the end of 2015 he was comfortably handling 80 minutes of game time.

Hodgson was always in the thick of things: producing 12 try assists (second to Sam Williams with 19) and 12 line break assists (club leader). He also produced 18 offloads (fourth at the club), 54 attacking kicks for 1751 metres (fourth) and three 40/20 kicks (club leader). The opposition sent lots of attack his way, and finished with 700 tackles for season (behind only Shaun Fensom on 917). Missed tackles is the thing he'll want to work on more for 2016, but given his workload it's not surprising he misses some. Overall, it's been an outstanding debut for Hodgson with Canberra - and he is surely one of the buys of the season in the NRL. Blake Austin wins the Fans' Choice Award for Canberra Raiders Back of the Year. He finished second in the voting on 18 points - just ahead of a fast finishing Jack Wighton on 17 points.

Blake Austin, aged 24, is another buy of the NRL season. At his previous clubs, he was a utility - who could play fullback, centre, five eighth and half, and can even kick goals. But he came to Canberra to make the five eighth spot his own. And that's exactly what he did, with a series of relevatory, explosive performances.

Austin made his NRL debut for the Penrith Panthers at the end the 2011 season - against the Raiders - and went on to play 13 games for the Panthers off the bench or at five eighth in 2012. In 2013, after an injury affected season, he was released early to the Wests Tigers on a two year deal. He went on to play 19 games in 2014 in the black and gold - becoming a fan favourite. The Tigers saw their future in even younger halves Luke Brooks and Mitchell Moses - and Austin sought, and eventually secured, another early release to come to the Green Machine. The Wests Tigers fans are still bemoaning Jason Taylor's decision to release him.

Austin finished the 2015 season as Canberra's top try scorer (14, ahead of Jarrod Croker on 12) and with a total of 56 points (second behind Croker, who was top pointscorer in the NRL). He led the club in tackle breaks (71) and line breaks (18). He's known as a running five eighth, but still produced nine try assists (third at the club behind Sam Williams and Josh Hodgson) and seven line break assists (fourth at the club). Sam Williams was the principal kicker, but he still achieved 3139 kick metres from 104 kicks and forced five line drop outs. Austin will want to reduce his error rate and, like Hodgson, missed tackles in 2016 - but again you'd expect this from the men with most match involvement.

Austin made City Origin in 2015, scoring three tries and producing considerable speculation about Blues selection. It didn't come off this year, but if his form continues, he'll press for a State of Origin place in 2016. Overall, it was a breakout year for the man with the goatee.

The Canberra Raiders Fans' Choice has been awarded since 2004, with the inaugural winner being Ruben Wiki. Other winners have included Jason Smith, Alan Tongue, Terry Campese, Shaun Fensom and Jarrod Croker. The award, sponsored by The Greenhouse Canberra Raiders supporters site (http://www.thegh.com.au), is voted on by the fans on line, who give 3-2-1 points to the best players each week.