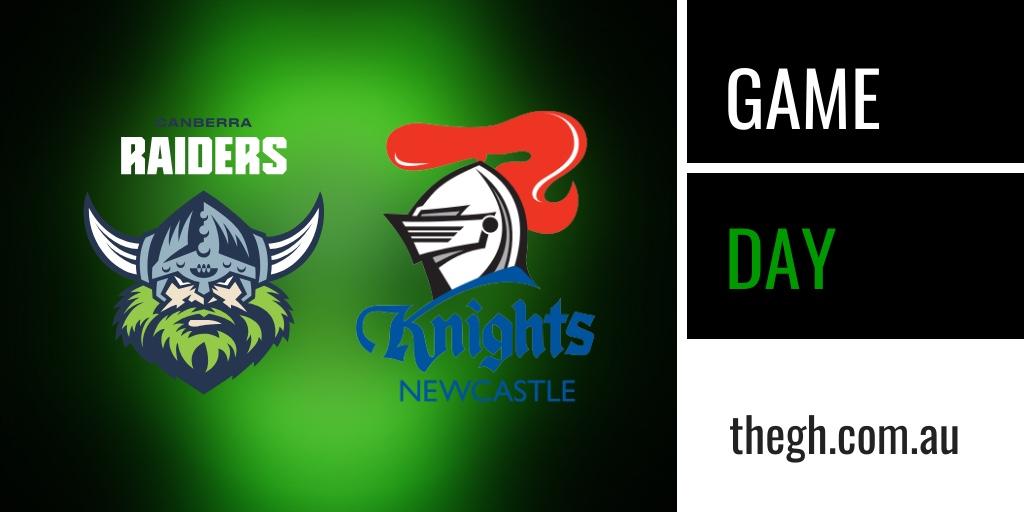 The Raiders travel to Wagga Wagga for a Round 9 clash with the Newcastle Knights. It is already a must win.

Last round: 2021 Round 8. South Sydney Rabbitohs 34 - Canberra Raiders 20. The Raiders came to play. They were disrupted by injury. There were players who were on notice. There were players who had effectively been dropped. And the team that took the park certainly responded. Coach Ricky Stuart often says that the "effort is always there". But to be frank, in recent weeks, it hasn't been consistently there across the park. The effort was there last Thursday night. There was intent in defence. There was vigour in attack. But ultimately, the Raiders were beaten by a better team. And they've now lost four in a row.

Team news: Josh Papalii makes his return to the Canberra side at starting prop, after being rested last week. Ryan James makes way, dropping to the reserves list. Raiders halfback George Williams has been named at halfback, after he was a late withdrawal last week, due to hamstring problem in the warm up. He's passed a fitness test, but Sam Williams is on standby on the reserves list. Sebastian Kris (ankle) has also passed a fitness test. Return dates for co-captains Jarrod Croker (shoulder) and Josh Hodgson (calf) have been pushed back.

For the Knights, Phoenix Crossland replaces Blake Green (ribs) in the halves, while Hymel Hunt (hamstring) is back on the wing. Starford To'a drops to the reserves list. Lachlan Fitzgibbon (shoulder) and Tex Hoy (hamstring) have been included on the extended bench.

Late changes: The teams are required to reduce their squads of 21 to 19 on Friday evening, and to 17 one hour before the match. We will have an update on Friday.

History: Canberra has a good overall record against Newcastle, winning 28 of 51 games, with two draws. The Raiders have won five and drawn one match in the last 10 clashes. In 2017, the Raiders suffered an embarrassing 34-20 loss in Round 10 at Hunter Stadium - to a team that would win just five matches all season. Canberra turned it around at home, winning 46-28 in Round 25. By then, the season was pretty much over for the Green Machine. In Round 2 of 2018, the Raiders suffered an awful, last gasp 30-28 loss to the Knights at home. But in 2019, it was a much different Green Machine that took out the Round 3 clash at Canberra Stadium, 17-10. In 2020, the Raiders suffered a disappointing 34-18 loss to Newcastle, in a Round 4 home game transferred to Campbelltown. The two teams have never met at Wagga before.

Betting: The Raiders are $1.50 favourites, while the Knights are paying $2.60. The Knights have a 5.5 points start in the line betting.

Stat attack: Both these teams have a 3 and 5 record and are separated on the ladder only on points differential.

The Knights have the second highest completion rate in the competition, and the lowest error count. Not that it's helping their attack much. It's not translating into possession share. Only the Tigers, Broncos and Bulldogs have scored fewer tries than Newcastle. The Raiders are in the top four teams for errors.

Raiders winger Jordan Rapana is now among the top five try scorers this year with eight, behind only Brett Morris (11), David Fifita (9) and Maika Sivo (9). He also ranks fifth in the competition for tackle breaks. Newcastle hooker Jayden Brailey has made more tackles than any player in the league (426). Meanwhile, Knights - and former Raiders - forward Mitch Barnett ranks first for missed tackles (32) and equal third for ineffective tackles (16).

Caleb Aekins and Kalyn Ponga: Caleb Aekins has been doing a pretty good job in deputising for the injured Raiders fullback Charzne Nicoll-Klokstad in the past three weeks. His strength is his running and he provides plenty of metres. It is a particularly tough match up for him this week though. Knights fullback Kalyn Ponga has only made four appearances himself this year, after missing the first month of the season due to shoulder surgery. His numbers, however, already show how dangerous he is with the ball in hand. The Raiders are going to really have to watch him.

Josh Papalii and David Klemmer: They might not face each other directly but they are the senior props at their clubs. Josh Papalii has been below his best in 2021, no doubt, but he's still been one of the Raiders' best forwards. Ricky Stuart rested him last week, with the aim of bringing the "old Papa" back. This week, Papa is straight back into the starting team - and he wins the match-up against either of the Knights' starting prop forwards for mine.

Tom Starling and Jayden Brailey: Tom Starling has had six appearances in 2021, but has only started the last two weeks - while Josh Hodgson has been on the sidelines with a calf injury. He averaged just over 20 minutes in his games off the bench, and played only five minutes in one of those games. Once you take that into account, his numbers stack up pretty well against Knights hooker Jayden Brailey.

My tip: The Raiders are clear favourites in this match - but I'm not sure it is all that clear. The stats suggest that the Raiders have a slight advantage, but in my view, this is a match that is up for grabs. Both teams are struggling on the field.

There is clearly unrest in the Canberra camp, which no doubt comes with big name players being dropped - or effectively dropped - and a four game losing streak. This week, it's been revealed that half George Williams is struggling with homesickness and raised the possibility of a release with the club. It's also been revealed that Josh Hodgson stood himself down as skipper two weeks ago - with Elliott Whitehead now taking his place as co-captain. Both Williams and Hodgson have confirmed their commitment to the club. But it hasn't been a great week for the Green Machine.

I'm hoping that we see the Raiders respond they way that they did in the first half last week - and can put in an 80 minute performance. And if they cannot produce a win, we could be in for a very long season. I can't say I'm tipping with any confidence... but I'll go with the Raiders by two.

Canberra Raiders forward Elliott Whitehead: "We can't leave it too much longer. We have to get back to winning ways and hopefully that's against Newcastle. The boys can take a few positives out of that game - Souths are up there in the competition at the moment and I thought we pushed them. At times I thought we had the better of them. Hopefully we can get back to playing 80 minutes and not having little patches here and there."