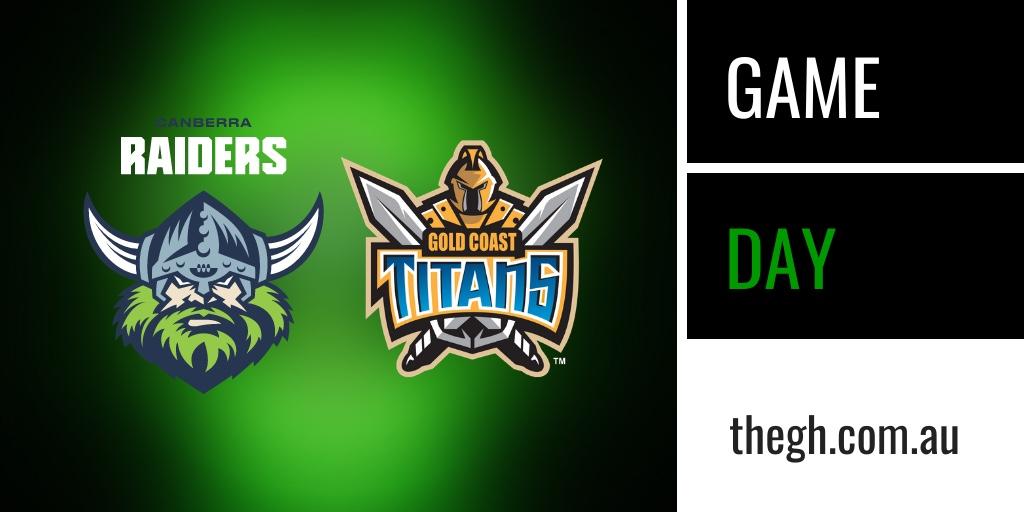 After a heart breaking, controversial loss to the Warriors, the Raiders head to the Kogarah in Round 4 for a meeting with the Titans. The match has been shifted from Robina to Jubilee Stadium, given the COVID situation in south east Queensland. The Titans temporarily relocated to Sydney on Wednesday. The Raiders were going to fly to the Gold Coast on Thursday and have their captain's run in Queensland. However, those plans have now changed.

Last round: 2021 Round 3. New Zealand Warriors 34 - Canberra Raiders 31. It was a narrow loss for a brave, courageous Canberra Raiders team. The Raiders lost Joe Tapine after 10 minutes to an ankle injury. They lost Ryan James and Sebastian Kris a few minutes later, after they clashed heads while attempting a tackle. Before 15 minutes had elapsed, the Raiders were down to just 14 men. The Raiders went to a 31-10 early in the second half, before the Warriors came back against an exhausted Green Machine. And the ultimate difference between the teams was a cruel one - a Warriors try scored from a blatant forward pass, with the referee, Henry Perenara, right there to see it.

Team news: Joe Tapine (ankle ligaments) and Curtis Scott (ribs) are unavailable for this match, but hope to return in a week or two. Tapine is replaced at lock by Ryan Sutton, while Sebastian Kris replaces Scott. Hudson Young (knee) returns to the side in the second row. Dunamis Lui has been named at starting prop, after playing in NSW Cup last week. Ricky Stuart confirmed on Friday that Young, James and Kris will be fit to play.

The Titans team is unchanged from the one that lined up against the Cowboys. Centre Brian Kelly (hand) has been named on the reserves list, with Sam Stone dropping out.

The Warriors have had a 2 and 1 start to 2021, most recently posting back to back wins over the Broncos and Cowboys. Their 44-8 win against North Queensland was their biggest ever victory. They also won the last five games of the 2020 season - but finished just outside the top eight.

Betting: The Raiders are $1.60 favourites, while the Titans are paying $2.35. The Titans have 4.5 points start in the line betting. The Titans odds have shortened since the market opened.

Charnze Nicoll-Klokstad and Alexander Brimson AJ Brimson suffered a fractured back at the NRL Nines in Perth at the start of 2020 - and his return in Round 12 was a signficant reason for the Titans' improved performances at the back end of the season. He's started 2021 just where he left off. Charnze Nicoll-Klokstad is a very strong running fullback, but Brimson probably has the advantage in ball playing. On balance, in 2021, the numbers marginally stack up in favour of CNK.

George Williams and Jamal Fogarty This match-up should probably pit Jamal Fogarty up against Josh Papalii. Half against prop. In case anyone had forgotten, Josh Papalii's 2020 tackle of the year now features in the NRL's 2021 ad campaign - showing how the impossible happens in rugby league. But Fogarty is actually facing Raiders' half George Williams. The combinations between Josh Hodgson and his halves are still developing - and that has meant that Williams has yet to consistently stamp his mark through games. But this "skin" definitely goes to Williams for mine.

For a long time, Mitch Rein was a thorn in the Canberra Raiders' side - back when he was playing for the Dragons. He's not on contract at the Titans beyond this season, and there is talk of the Gold Coast targeting the Storm's Brandon Smith. The 30 year old has struggled at times at the Titans, but the 30 year old wants to keep playing.

"There’s no point me worrying about that stuff I can’t control," he says. "It is what it is. We’ll see how I go. No one is going to re-sign me unless I’m playing well, so I’ve got to do that first."

And he has played well in the opening rounds of 2021. He's got some pretty good numbers this year, probably better than Josh Hodgson. But Hodgson is one of the best rugby league hookers in the world - and Mitch Rein is well down that list. I'm just hoping Rein doesn't produce one of those games where he makes the Raiders pay.

David Fifita and Hudson Young David Fifita is the Titan's million dollar man. $1.2 million per season to be precise. That's what it took to entice him to leave the Brisbane Broncos and head to the Gold Coast in 2021. The 21 year old is one of the most talked about young players in the NRL, not just because of the big impact he makes on field - but also because he has been in a bit of trouble off the field. Fifita is big and very dangerous in attack on the edge. Hudson Young was rested last week, after he had a knee problem late in the match against the Sharks. But it looks like he will be fit to play on Saturday. Young will have his hands full containing Fifita. Young's contract probably pales in comparison to Fifita, but his 2021 statistics do not - and Young probably has the better defence. This should be a great contest.

Our tip: Before the season commenced, most commentators were saying that the Raiders had an "easy" draw in the opening month of the season. Of course, nothing is easy in the NRL. They've had tough matches against the Sharks and Warriors - and this will be another tough game.

The Titans have lost their home ground advantage, but they are in good form. Their attack really clicked last weekend. Meanwhile, the Raiders have been disrupted by injury. However, I think the Gold Coast will find Canberra a much more difficult assignment than the Warriors, Broncos and Cowboys - the teams they have met so far this year. Raiders by six.

Jarrod Croker on the loss to the Warriors: "We can build off that. We won't lose any confidence. I know we won't lose any admirers from our fans. We're disappointed as well, but there's a lot of positives to take out of the loss. It's deflating at first, but looking back on it I think we can certainly build on it."

Game day! This game worries me a little
Top

Great day for it!
Top

Thinking of going tonight, how's the parking around Kogarah oval?

See if these muppets beat the titans!
Or blow a lead again!!
Top

My body is ready.
Top

I've parked in this vacant lot near the hospital. Think I'm good
Top

So many one sided games this weekend...
Top

I'm too lazy to go


Sent from my SM-G960F using Tapatalk

Afgaga thinking of you brother, would have been good to see you

I’ve been at work, just got home, what have I missed ?
3rd Battalion Royal Australian Regiment..Old Faithful
#emptythetank

-PJ- wrote:I’ve been at work, just got home, what have I missed ?

Sticky read the gh realised that a couple of people said they had no resilience and sacked the whole team let alone croker and raps.. So nothing much

Welcome to our coverage of tonight's NRL clash between the Canberra Raiders and Gold Coast Titans at Kogarah Jubilee Stadium. We'll have live scores from 7:45pm.

The Nrl is broken...The gap between the good teams and the not so good teams is getting wider and wider.
Top

James starting and Papa off the bench..
Top

Are we going to see Cameron Smith level performance from Mitch Rein?
We have a knack of making average players look like legends...
Top

Jeez. Ground looks a bit scuffed up. Hope we get through without any injuries

The Cowboys are absolutely atrocious. The Sharks have done well with an injury toll but the Cowboys have been actually disgusting. Lazy, unmotivated garbage. One of the Sharks' tries the kick went up and about three Cows defenders literally watched Dugan run 30m, catch the ball, and step all of them to score without even really trying to stop him.

Dunno how they're going to fix that club but they're really, really broken. People have just been so distracted by how bad the Broncos and Bulldogs were last year to notice.
And to all the people who doubted me, hello to them as well. - Mark Webber, Raiders Ballboy and Unluckiest F1 Driver Ever

I mentioned this earlier in the week (how poor i thought this surface is) and got told otherwise.
I’m not convinced. It’s always been a potato patch...
Top

Do not mind seeing Manly and Brisbane getting pounded; Canterbury and North Queensland are just boring.

Would have lived seeing Tapine against Tino.

We cannot afford another poor start.
WHAT A LONG STRANGE TRIP IT'S BEEN
Top

raiderskater wrote: ↑April 3, 2021, 6:03 pm The Cowboys are absolutely atrocious. The Sharks have done well with an injury toll but the Cowboys have been actually disgusting. Lazy, unmotivated garbage. One of the Sharks' tries the kick went up and about three Cows defenders literally watched Dugan run 30m, catch the ball, and step all of them to score without even really trying to stop him.

Dunno how they're going to fix that club but they're really, really broken. People have just been so distracted by how bad the Broncos and Bulldogs were last year to notice.

There is a BIIIIIIGGGG gap between the bottom teams and the top tier this year... probably as big as I remember it in a long time.
Top

I would love an 80 minute performance where we’re not on the edge of our seats come full time...
Top

GreenMachine wrote:I would love an 80 minute performance where we’re not on the edge of our seats come full time...

Only if we are on the good side of that

irvste wrote:Makes for boring viewing these lopsided matches I've already switched to something else a couple of times this year but I otherwise watch a lot of the other games

I haven’t got through a full game this round

I'll be happy with 2 points. Titans just missed the 8 last year and are better now. This is a tough game.
* The author assumes no responsibility for the topicality, correctness, completeness or quality of information provided.
Top

irvste wrote:Makes for boring viewing these lopsided matches I've already switched to something else a couple of times this year but I otherwise watch a lot of the other games

I haven’t got through a full game this round

Me too. All the games this weekend have been trash.
Top

I'll be happy with 2 points. Titans just missed the 8 last year and are better now. This is a tough game.

Yeah that’s a good point. This might be the closest fixture on paper.
Top
Post Reply
546 posts