Henry Perenara was never supposed to referee Saturday's controversial Raiders - Warriors clash in Canberra. It's common knowledge that the ref and Ricky Stuart don't get on - largely because the Raiders coach sacked Perenara as a player at Cronulla over a decade ago.

As many of you know, i dont buy into referee conspiracies against the Raiders, and im certainly not suggesting it here... but this surely can not be allowed to occur. I dont think Perenara is out here trying to get back at Ricky or hates the Raiders, or calls the game with a personal grudge in mind... but he should be assigned games that involve the coach who sacked him.

You have to trust the integrity of your employees. With Perenara how could you ever tell he was being bias anyway. He has a track record of bizarre calls, I doubt you'd be able to map any trend.


I dont think there would be any trend, except a trend of arrogance and incompetence where ever the man goes, but there is no chance a former player turned referee in world football, NBA, NFL etc would be allowed to officiate a game in which he was essentially sacked by one of the HC's involved.

Perenara was sacked by about 4 clubs wasn't he? Including by Brown at the Dragons. 10 years ago when he began as a referee he probably would have had some sort of conflict in half the games.
Top

Canberra Raiders coach Ricky Stuart has been cleared of a verbal attack on referee Henry Perenara in Saturday's controversial loss to the New Zealand Warriors at Canberra Stadium.

The NRL's ground manager's report on the match included an allegation that Stuart swore in the direction of the referee during the match. It appears the alleged incident followed a decision to award a try to Warriors forward Ben Murdoch-Masila, following a blatant forward pass from Kodi Nikorima.

Stuart has strenuously denied the allegation in the report.

"I didn’t go anywhere near him or say anything to him," Stuart told The Daily Telegraph earlier in the week.

"Like 13 and a half thousand other people I was singing out and venting my frustration but it was not directed at any individual. I’ll always put my hand up when I’m wrong and embarrassed about it. If they want to take that further then bring it on."

The Daily Telegraph's Phil Rothfield reported on "NRL 360" tonight that the referees and touch judges did not hear any comment from Stuart.

Rothfield says NRL CEO Andrew Abdo called Stuart today, with the result being that the Canberra mentor will not be subject to any fine and has been cleared.

Rothfield said that the NRL may send Stuart a "soft letter" reminding Stuart to be careful of what is said on the sidelines.

A report for The Greenhouse

This was classic NRL trying to deflect the attention away from the rubbish ref.

Na, sounds like its a new ground manager who didnt quite get what this whole deal was about
He heard Stuart blowing off steam and reported it, probably in good faith but the accusation never had much legs and sounds like everyone knew that from the onset.
CREATE PROCEDURE BotMan_Post AS
SELECT * FROM Previous_Post
EXEC quote_post
WHERE UserName = 'Aknalkfgnaa' OR 'Yeah Raiders' OR 'Billy B'
EXEC RAND(good_grief; cheak_notes; uh82cit;)

Ricky has really improved in his acceptance of refereeing mistakes since the 2019 Grand Final debacle. He’s been very controlled over the last few seasons despite the odd game losing howler. I didn’t think this was something Ricky could shake off.

It’s a shame fans will be thinking this incident and report was yet another Ricky Stuart blow up at the refs.

Annesley should be apologising to Ricky over the whole drama his staff generated. Starting from a terrible terrible refs performance through to an overzealous official making something out of nothing.

We will win the comp
Top

Azza wrote:We will win the comp

I really hope so Azza.

Sent from my SM-N986B using Tapatalk

Azza wrote:We will win the comp

I really hope so Azza.

Sent from my SM-N986B using Tapatalk 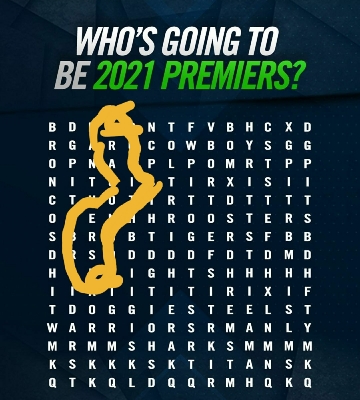 ‘I’m going back into the box’: Why Sticky is ditching the sideline

Ricky Stuart will revert to watching games from the privacy of the coaches box and ditch the sideline because he no longer wants his emotions on full display. Stuart said he would be in the coach’s box at Jubilee Stadium on Saturday for the clash against the Gold Coast Titans.

“I feel I coach the best when I’m on the sidelines. But I’m going back into the box. I’ll be in the box on Saturday. It’s probably best people no longer see that passion from me on the side of the field.”

Surely Ricky on the sidelines is good for rugby league. He's done nothing wrong... people love to see his emotion and love to see him down with the team on the edge of the field. It'd be a great shame if pressure from the NRL has led to the decision.

greeneyed wrote: ↑April 2, 2021, 4:33 pm Surely Ricky on the sidelines is good for rugby league. He's done nothing wrong... people love to see his emotion and love to see him down with the team on the edge of the field. It'd be a great shame if pressure from the NRL has led to the decision.

That one really doesn't come across well from Stick. If he performs best on the sideline, and wants what's best for the club, that's where he should be.

No, I think Stick's making a point. We don't see fines and investigations threatened about the way Bellamy and other assorted coaches carry on in the box - for which they are frequently celebrated. Who's the coach investigated? The only one on the sideline. Well, why not have him up in the box? No power-tripping ground-manager can report him from there.
And to all the people who doubted me, hello to them as well. - Mark Webber, Raiders Ballboy and Unluckiest F1 Driver Ever