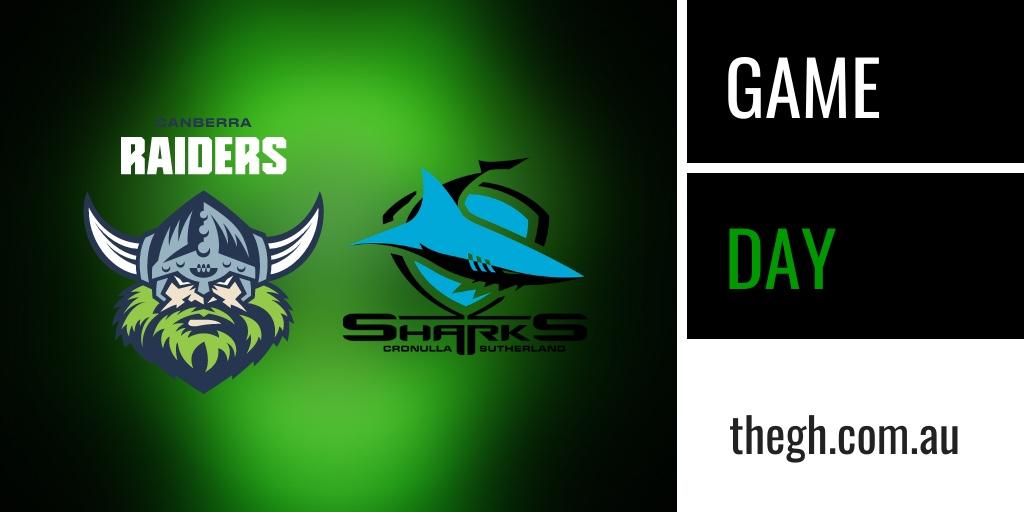 The Canberra Raiders travel to Kogarah for a meeting with the Sharks in Round 2, hoping to build on a good start to the 2021 season.

Last round: 2021 Round 1. Canberra Raiders 30 - Wests Tigers 12. The final score line was convincing, a five tries to two victory for the Green Machine. The Raiders were expected to win well, and they did in the end. In the first half, the Raiders lacked composure and patience in attack. Too often they tried for the miracle kick, the miracle off load. And the Tigers certainly scrapped in defence. The Tigers deservedly went to the break with the scores level, at six apiece. But the Raiders re-grouped at half time, and were clearly a class above in the second half.

Team news: Canberra Raiders coach Ricky Stuart has named an unchanged line up from the one that defeated the Tigers in Round 1. Co-captain Jarrod Croker (shoulder) is now expected to return in either Round 3 or 4. Forward Corey Horsburgh was available for this match after serving a one week suspension, but has not been included in the top squad.

Sharks centre Jesse Ramien has been suspended for three matches, after being charged with a reckless high tackle on Matt Dufty in Round 1. He's been replaced by Hawene Hiroti. Coach John Morris has otherwise left his top 17 unchanged. Forwards Royce Hunt (knee) and Siosifa Talakai (shoulder) will now not return until Round 3.

Late changes: The Raiders omitted Tom Starling and Emre Guler from their squad on Saturday evening, with Sam Williams and Harley Smith-Shields remaining on the reserves list. Andrew Fifita and Braydon Trindall were cut from the Sharks' squad.

History: The Raiders have won 37 of 78 matches against the Cronulla Sharks, for a 47 per cent win rate. Canberra has won six of the past 10 clashes between the clubs - and the past four straight. In 2019, the Raiders had a hard fought 22-20 win at Canberra Stadium in Round 14 - after leading 20-8 at half time. Then in Round 24, the Raiders won, 15-14, at Shark Park in golden point - with Aidan Sezer kicking three field goals. That spoiled the party for Paul Gallen's final home game for the Sharks. Last year, a "Rookie Raiders" team defeated the Sharks, 38-28, at Jubilee Stadium, after coach Ricky Stuart rested a host of his stars in the final round of the regular season. That's the only game the clubs have ever played at Kogarah to date. The two teams met again in Week 1 of the finals, with a full strength Raiders winning 32-20 at Canberra Stadium.

The Sharks finished the 2020 season on a three game losing streak - two at the hands of the Raiders - but opened 2021 with a 32-18 win over the Dragons at Kogarah. The Raiders have won four of their past five games, the only loss coming in the 2020 Preliminary Final against the Storm.

Betting: The Raiders are $1.50 favourites, while the Sharks are paying $2.60. The Sharks have 4.5 points start in the line betting. The Sharks odds have shortened over the week.

Jack Wighton and Matt Moylan Jack Wighton was the Dally M Player of the Year and Five Eighth of the Year in 2020 - but by his standards, he had a relatively quiet game for the Raiders in Round 1. Matt Moylan has struggled to settle at the Sharks since transferring from the Panthers in 2018. He played his first season at Cronulla at five eighth, before moving to fullback in 2019. However, he's only played 19 games over the past two seasons, mostly due to hamstring problems. With Shaun Johnson (Achilles) out injured for the first six weeks or so, Moylan has started 2021 at five eighth - and the 29 year old made a good impression. But this match-up is a hands down win for Wighton.

George Williams and Chad Townsend George Williams has had a great first season in the NRL. He scored seven tries for the Green Machine, while producing 15 try assists, 19 line drop outs and an average of 232 kicking metres. His short kicking game was outstanding, with many of his try assists coming from cross field kicks to the try line. Sharks half Chad Townsend scored one try in 12 games last year - and posted nine try assists, seven forced line drop outs and 188 kicking metres per game. Both halfbacks had strong games in Round 1 - delivering two try assists for their teams. It'll be a tough battle, but taking account of Williams' stronger defence, Prince George takes this match-up.

Hudson Young and Wade Graham This match-up is a battle between a young bull and an old bull. Hudson Young took over John Bateman's vacant second row spot in Round 1 and made it his own. He's had his problems with on field discipline, but that's now well behind the 22 year old - who has just re-signed with the Raiders to the end of 2024. If Young wasn't the man of the match last Sunday afternoon, he was awfully close. Wade Graham is getting close to "veteran" status. The 30 year old is set to play his 250th first grade game in this match - so he might bring out something special for this one. Should be a great contest.

Joseph Tapine and Toby Rudolf Joe Tapine was in career best form in the second half of 2020 - and he started 2021 right where he left off. He's such a powerful runner, and it was great to see him break a tackle to set up Jordan Rapana for his second last Sunday. Toby Rudolf, 25, made his NRL debut in Round 1 last year with the Sharks, and went on to make 20 appearances. He's found himself in hot water with the NRL for some sexist comments after Sunday night's game - but I doubt Rudolf will be thinking about that by next Sunday. He's going to be a handful, standing at 190 cms and weighing in at 106 kgs. But Tapine takes this match-up, without a doubt.

Our tip: The Raiders are stronger than the Sharks on paper. But games aren't played on paper, as we were reminded in the first half of the Raiders' clash with the Tigers. For a long time, the Raiders struggled to beat the Sharks in Sydney. Shark Park was definitely a bogey ground, even during the Raiders' golden days of the 1990s. But in the past decade, the Raiders have won seven of the past 10 games these two clubs have played in Sydney. In a twist, the Sharks' fortunes turned at Canberra Stadium, winning six in a row between 2013 and 2018. The Sharks are a team that like to get into a bit of a scrap, and the Raiders can find that difficult to handle. But the Sharks are not the team they were when they won the 2016 Grand Final. And this game is not being played at Shark Park. The Raiders should be too strong. Raiders by 10.

Josh Hodgson on the win over the Tigers: "Round 1 we certainly need to be better than that, but you just take the win whenever you can get them - especially at the start of the year when you just need to get points in the bag. The silver lining from the first half was our defence. We put ourselves under some really unnecessary pressure, but we backed it up with some great efforts."

If anyone has any suggestions for the Game Day preview, please post them or PM me. Things you want or don’t want. I’m in the early stages of settling the format for the season, so please let me know.

How do you feel about more 'segments'?

That wasn’t the question... but to answer yours...

For those who like their match program, our friends at League Unlimited have once again come up with the goods since the demise of Big League...

Anyone know which hotel the players are at?
Top

Looks like it will be a wet one! Fortunately we have the pack to take advantage. Hold the ball, make metres and capitalise on errors.

Need a good long and short kicking game from our halves too!
Top

This rain won't stop me from heading to kogorah
Top

Game day you pack of soggy biscuits!
And to all the people who doubted me, hello to them as well. - Mark Webber, Raiders Ballboy and Unluckiest F1 Driver Ever

Did you watch Cook yesterday though? His speed at dummy half just tore Manly to shreds
Top

Manly are pretty **** defensively though

I think everyone has forgotten, it is often bloody hot this time of year. When they did the fixture, they failed to plan that there would be rain of biblical proportions this weekend rather than 30+ degrees at 2pm. That is why they moved the games to 6.15 in March.
Top

They stop after round 5 with the exception of ANZAC Day.
* The author assumes no responsibility for the topicality, correctness, completeness or quality of information provided.
Top

Did you watch Cook yesterday though? His speed at dummy half just tore Manly to shreds

Nah I missed it.
Top

Forecast for this afternoon and this evening at Cronulla. 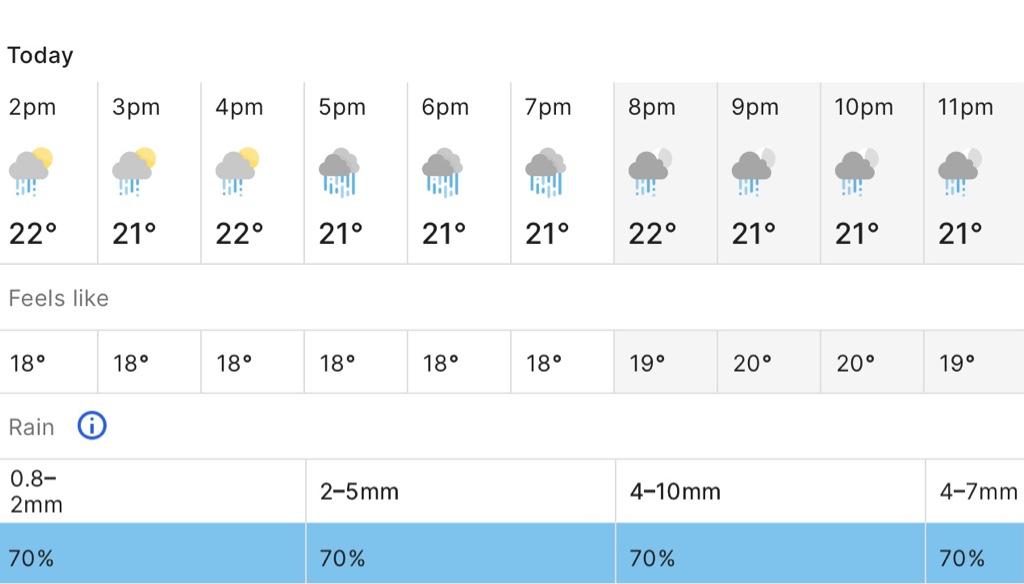 Sent from my iPad using Tapatalk

Did you watch Cook yesterday though? His speed at dummy half just tore Manly to shreds

Nah I missed it.

I suspect that Cook's performance (didn't see it) has more to do with the year that Manly look likely to have than the value of a quick player on a heavy wet track.
Top

GWillys short and long kicking game needs to be spot on today.

I’m fairly confident it will be.

Hold the ball and tackle ya arses off boys..I love youse all.

Cook does that kind of thing in both wet and dry conditions.
* The author assumes no responsibility for the topicality, correctness, completeness or quality of information provided.
Top

I thought our kicking game in round 1 was poor.
Looking for improvement today.
Top

Judging by the instagram posts, we're wearing the ugly "home" jersey today. I guess we'll see how it goes in the rain.
And to all the people who doubted me, hello to them as well. - Mark Webber, Raiders Ballboy and Unluckiest F1 Driver Ever

Welcome to our coverage of this evening's Round 2 NRL clash between the Canberra Raiders and Cronulla Sharks. We will have live scores from 6:15pm right here... and we'd encourage posters to join in with their own commentary and discussion points as the match unfolds.

Both teams are 1-17. Here are the final team line ups:

Playing against his junior club, on the back of good moments last week and for the fact he's due.

A few sneaky right hooks onto Chad Townsend would be appreciated too.

Sent from my Mi A3 using Tapatalk

How good is BJ going
Top

Close to the Roosters best this week..
Top