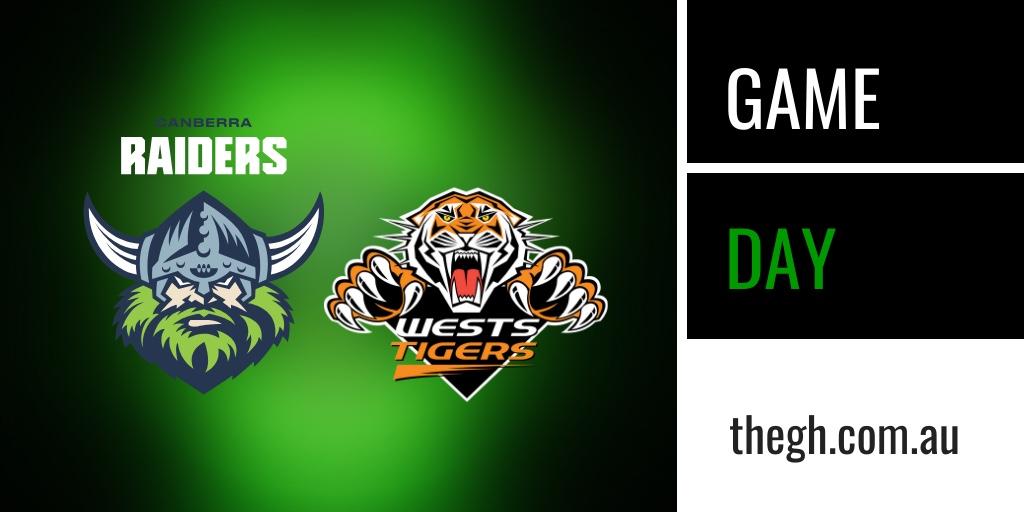 The Canberra Raiders play their 2021 season opener against the Wests Tigers at Canberra Stadium. Finally, an actual traditional rivalry to start the year for the Green Machine!

Team news: The Canberra Raiders have named Sebastian Kris at left centre, with co-captain Jarrod Croker ruled out. Kris has earned a new top 30 contract, while Croker is still recovering from shoulder surgery. Ryan James will make his debut in green off the bench. In a slight surprise, Siliva Havili and Ryan Sutton have been named on the bench, with Tom Starling and Emre Guler missing out on the top 17. Forwards Corey Horsburgh and Corey Harawira-Naera are both unavailable due to suspension.

Late changes: Tom Starling and Emre Guler dropped out of the Raiders' squad on Saturday afternoon, leaving Sam Williams and Harley Smith-Shields on the reserves list. Starling and Guler will play NSW Cup. Tukimihia Simpkins and Alex Seyfarth have been omitted from the Tigers' squad.

For a long time, the Tigers were a bit of a bogey team for the Raiders. However, that's now changed. The Raiders have now won eight of the past 10 matches between the clubs, and four of the last five. The Raiders won both contests in 2019. They produced a comprehensive victory in Round 13 last year at Western Sydney Stadium, holding the Tigers scoreless (28-0). They backed that up with a 20-12 win at Canberra Stadium in Round 18. The Green Machine produced a 14-6 win in Round 5 last year at Campbelltown Stadium.

The Raiders have won 10 of 20 matches against the Wests Tigers at Canberra Stadium.

The Tigers finished the 2020 season on a three game losing streak, falling to the Rabbitohs (26-24), Storm (50-22) and Eels (28-24). Their only victory in their past five games came against the Sea Eagles (34-32). The Raiders were on a five game winning streak last year, before being defeated by the Storm (30-10) in the Preliminary Final.

The Tigers produced a big 52-18 win over the Sea Eagles at Leichhardt in their recent trial match. The Raiders lost their trial against the Roosters by six, but won the first half in the battle of the two teams' A listers.

Betting: The Raiders are $1.37 favourites, while the Tigers are paying $3.10. The Tigers have 7.5 points start in the line betting. The Tigers' odds have shortened over the week.

Stat attack: There are a couple of stats from 2020 that the Canberra Raiders will want fix this season. Over the regular season, they made 1661 metres on average with the ball in hand, but conceded 1679 metres per game in defence. That's a negative differential of 18 metres - the only top eight team to lose the battle for territory. The Raiders have a mobile forward pack, but they'll be looking to make more metres this year - along with the back three. There should be metres on offer, with the game set to be even faster in 2021. The Raiders will also need to watch the number of set re-starts they concede. They ranked fourth in the NRL for "six again calls" conceded last year.

Curtis Scott and Joey Leilua Former Raiders centre Joey Leilua was one of the Canberra Raiders most damaging attacking weapons in the No. 4 jersey - before being released to the Wests Tigers at the start of last year. He recently described his first year with the Tigers as "absolutely disgusting".

"It was poor from me," he continued. "I never want to see myself like that again. I was poor in my performances … they signed me to make the club better. I let the club down and the fans. My job this year is doing my best as I can to repay them. When you sign someone you expect them to do a job and I didn’t do that last year."

He's reportedly stripped 10kgs from his frame and will reportedly play on the left this year. That means he'll come up against the man who replaced him in the Raiders' No. 4 jersey - Curtis Scott. Scott didn't have the best of years in 2020 himself. He was arrested after a big day out on Australia Day, and faced various charges, before being cleared in court. He was subjected to brutal treatment by police, with the court concluding he was illegally arrested. Injuries also disrupted his season. He'll be looking to make a big impact in green this year.

George Williams and Luke Brooks Luke Brooks was the Dally M Halfback of the Year in 2019, but he'd probably prefer to forget his 2020. Benji Marshall mostly led the charge for the Tigers last year in the halves. But Marshall has gone to the Rabbitohs and Brooks will need to be the leader this season.

"The way we're going to play is having that traditional halfback and not having it split left and right," Brooks said recently. "I think that's when I play my best footy. I've looked at deception stuff and playing around the ball … coming up with ways to trying to outsmart the defence. You've got to find ways to score points."

Brooks faces a tough opponent in the Raiders' English half George Williams. He had an outstanding debut season in the NRL last year. He's known as a runner, but stepped up as an organiser when hooker Josh Hodgson was lost for the season to an ACL injury. Hodgson will be back for Round 1 - and based on the Raiders' trial match against the Roosters, it looks like he's been working hard on the combination with his halves. They looked slick. Williams has a pin point kicking game and that helped him net 15 try assists last year. That compares to three for Brooks. If I were in the business of awarding "skins", Williams takes this one.

Josh Papalii and James Tamou These two props might not face each other directly, but they are the leaders of the pack for each team. The Tigers have recruited Tamou from the Panthers for 2021 - and have immediately appointed him captain. That's how influential the Tigers expect him to be. But there is no better prop in the game than Canberra's Josh Papalii. He wins this match-up for mine, very clearly.

Our tip: The Tigers have missed the finals for nine consecutive seasons, finishing in ninth three times. Not last year. They placed 11th, winning seven games and losing 13. Tigers coach Michael Maguire cleaned out his team over the off season, adding Tamou, centre James Roberts, fullback Daine Laurie and prop Joe Ofahengaue. Maguire no doubt would have liked to keep hooker Harry Grant, who was on loan from the Storm in 2020. But that was not to be. It's hard to see them improving enough to be a finals contender. The Raiders have lost second rower John Bateman and winger Nick Cotric. But they have enough young players coming through to fill the holes, and are absolutely stacked in the forwards. The spine is definitely top four quality. The Raiders are correctly warm favourites in this one. Raiders by 10.

Josh Papalii: "I've been here a long time and I know what we have here is special. We'll be a chance to take it all the way to the final game. If I'm thinking less than the grand final this year there's no point being here."

I really hope we can get the huge crowd on Sunday...
.
...the weather's not looking good though.
And to all the people who doubted me, hello to them as well. - Mark Webber, Raiders Ballboy and Unluckiest F1 Driver Ever

GE, sorry if you've posted elsewhere but what are the current stadium restrictions? For example are fans allowed to bring bags into the stadium again?

gergreg wrote: ↑March 9, 2021, 6:46 pm GE, sorry if you've posted elsewhere but what are the current stadium restrictions? For example are fans allowed to bring bags into the stadium again?

Bags are not permitted. It’s 100 per cent capacity, when seated you are required to be in your allocated seats. Lots of sold out bays. 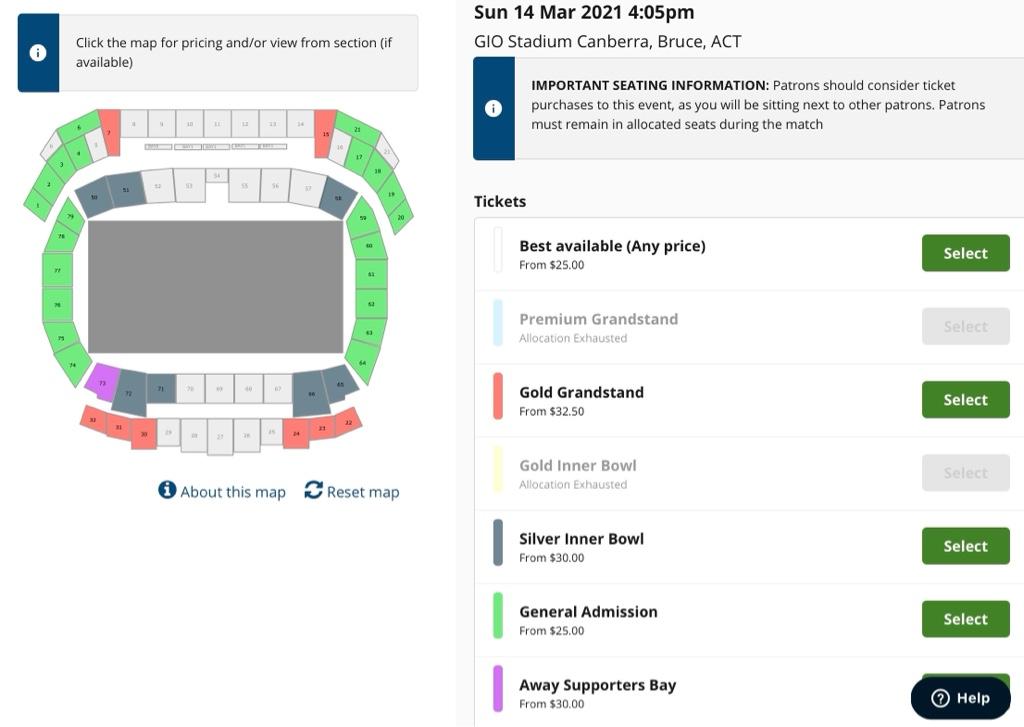 They allowed clear bags at the Brumbies on Saturday night

Yes, as per last year, no bags, but you can have clear bags to carry permitted food and water.

For those who are fans of a match day program, League Unlimited are again doing their digital program. I doubt there is too much information there that you can’t already find on the GH, but the GH is not designed to be printed.

Sadly it seems that Big League will not be returning as they had hoped when they shut down last year.
Top

Bom app shows 40% chance of rain between 2 an 5 hopefully rains early but not at game time.. Can't wait regardless

Game day you Biden lovers!!!!
WHAT A LONG STRANGE TRIP IT'S BEEN
Top

Just over 10hrs till kickoff.

Up the Milk,let's smash the pussy cats

Terrible. Lots of rain at the moment.
Top

The rain suits us better.. our big men become more effective and their quick players slip over..
Top

Pissing down in Belconnen.

Just a shame it might damp down crowd numbers when the club and players deserve a big crowd.
Top

Weather forecast has the rain stopping approx 3pm so it might be alright.

But a grinding forward style battle should suit us fine anyway.
Top

Just a shame it might damp down crowd numbers when the club and players deserve a big crowd.

This is my reaction too. If we'd got a sunny day we were headed for 20,000 for sure. But with this weather, maybe 10,000 if we're lucky, with everyone else watching on Channel 9. Oh well, do our ratings good I guess.

Meanwhile, I'm thinking whoever decided the Raiders should give out a membership poncho a couple of years ago needs a raise. But it's a shame that the crowd's Milk jerseys will all be covered up by ponchos and raincoats.
And to all the people who doubted me, hello to them as well. - Mark Webber, Raiders Ballboy and Unluckiest F1 Driver Ever

It will clear up by 4

I lost my poncho at the ground last year.

It's been pretty heavy rain at mine for the past hour.

Those towels are going to be handy
Top

Just stopped in south Canberra... and the weather radar shows there's virtually nothing else on the way.

My body is ready.
Top

Looks like the Heritage jersey will be used today

Has been stopped for a while in Gungahlin, sky is getting fairly light. Reckon it's done.

Still bringing my poncho just in case.
And to all the people who doubted me, hello to them as well. - Mark Webber, Raiders Ballboy and Unluckiest F1 Driver Ever

Update: the Raiders just posted a shot of Ryan James' spot in the locker room, and it's definitely the heritage jersey hanging up ready to go along with his warmup shirt.
And to all the people who doubted me, hello to them as well. - Mark Webber, Raiders Ballboy and Unluckiest F1 Driver Ever

Sun peeking through now - we’re back on again for a good crowd I reckon.
Top

Welcome to our coverage of today’s NRL clash between the Canberra Raiders and Wests Tigers. We’ll have live scores from 4:05pm right here in this thread.

Hodgson says this has been the hardest preseason yet...
Canberra 13+