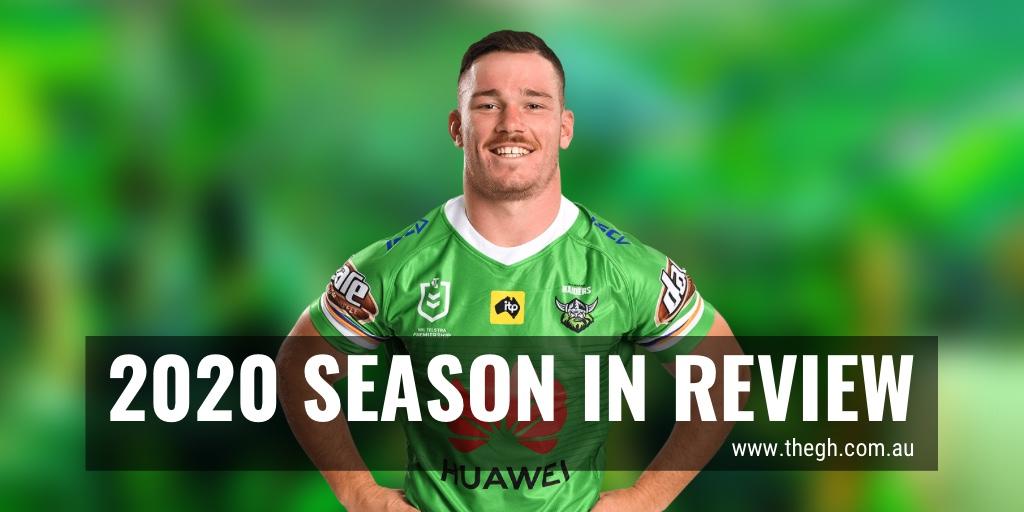 This is the thirteenth instalment of 2020 in review. As is the tradition, now the Raiders' season is over, we are reviewing all 32 players who pulled on a green jersey this year. So far, we've looked at Charnze Nicoll-Klokstad, Jordan Rapana, Jarrod Croker, Curtis Scott, Nick Cotric, Bailey Simonsson, Semi Valemei, Michael Oldfield, Jack Wighton, George Williams, Josh Papalii and Josh Hodgson.

When Josh Hodgson suffered an ACL injury in the Round 9 clash with the Melbourne Storm, most commentators immediately ruled the Canberra Raiders out of contention for the 2020 season. However, the Green Machine confounded the critics, finishing just one win shy of another Grand Final. That was due in no small part to the substitute hooking duo of Siliva Havili and Tom Starling. For the most part, Ricky Stuart started matches with Havili in the No. 9 jersey - with the hooker/forward absorbing the big hits in the opening stages, before the 22 year old Tom Starling took over.

Starling stands at 170cms and weighs in at 82kgs, making him one of the smallest players in the NRL. But as the old adage goes, he plays well above his weight - and he uses his size to his advantage. He's nippy and quick out of dummy half, and often showed up the big forwards in the middle of the park. He takes decisions quickly, and gives crisp, clean service to the halves. In defence, he has great technique for getting in and under much bigger players, and dumping them on their backs.

Starling made just three first grade appearances in his first year with the Raiders in 2019. He was on a development contract last year. But he performed strongly with the Raiders' NSW Cup affiliate, Mounties, and earned promotion to the top 30 squad. He started his 2020 season in the Round 10 Grand Final re-match against the Roosters and went on to play in every remaining match of Canberra's season, including three finals matches. He started in five of his 14 appearances, with the remainder off the bench.

I rated him an average of 6.8/10 over the course of his season. His best rating - an "8" - came in the Round 20 win over the Sharks. He took "man of the match" honours in that game in Fans' Choice voting, posting one try, five runs for 108 metres, 51 kick return metres, three line breaks, three try assists, two line break assists, four tackle breaks, 48 tackles and 89 per cent tackle efficiency. The try he set up for Sam Williams, with a great break and perfect kick, was a gem.

Starling also picked up Fans' Choice points in the Round 10 win over the Roosters and the Round 16 win over the Bulldogs. He scored a double in that clash with the Dogs.

Despite the fact Starling appeared in only 60 per cent of the Raiders' matches - and averaged just over 50 minutes per match - he ranked third at the club for try assists and seventh for total try involvements. He was second to Charnze Nicoll-Klokstad for dummy half runs, and first for metres per run, amongst the regular first graders. In defence, he ranked equal third for tackles per match at the club, behind only Josh Hodgson and John Bateman. For a small player, his tackle efficiency was a very good 92 per cent, ranking sixth at the club. His average missed tackles per game was way down the list, at the club, and amongst NRL hookers. Starling is not a hooker who does a lot of kicking, but with George Williams and Jack Wighton in the team, he doesn't have to.

There is a lot to like about Tom Starling's game... and the way he stepped up this year was very impressive. The pace of his development was a real highlight of 2020 for me. On the eve of the finals, he was rewarded with a new two year deal, keeping him at the club to the end of 2022. One thing Ricky Stuart will be pondering over the off season will be how to take advantage of his talents once Josh Hodgson returns. Hodgson has been an 80 minute hooker for a while, and he's one of the best in the business. For mine, I think there has to be a role in the top 17 for Starling off the bench. 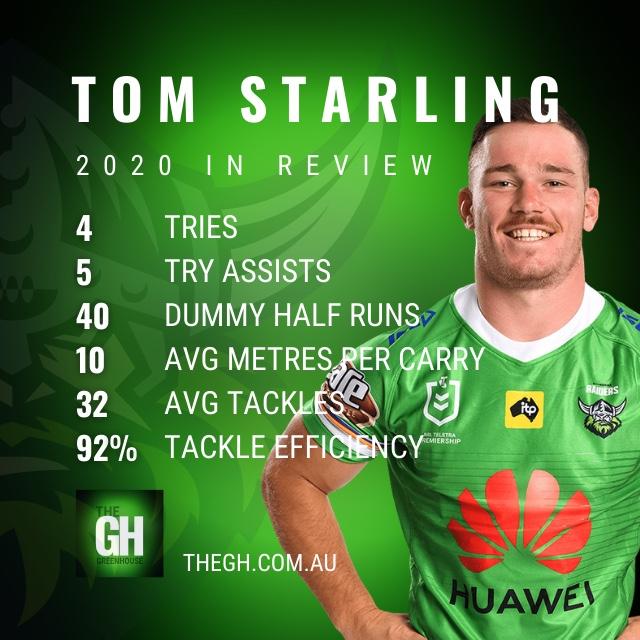 Starlo was one of the finds of the year. We hit the bargin basement jackpot on this one. That said, I think he cost himself a point or more by not doing the thing he does best, often enough. The thing that annoys me about Starling, and not sure if its a coach thing, a system thing, a game plan thing, BUT, he is a running 9, a Damien Cook type 9, and I don't think he ran enough at times. I look at that 'Rising Raiders' vs Newtown Jets game, and see how good he is when he runs, then look at the Roosters game at GIO, or even the Sharks final at GIO, and think, WHY Tommy? WHY? (Think Forest Gump) Run Tommy! RUN! I realise game situation affects this, but there were definitely times in both those games where he needed to take a dart, and him running, will actually open the game up, as it adds a threat the defense has to account for.

He had a really good year. Proved himself not only a solid first grader but has the potential to influence a game and be a star.

His game is well to the new rules. As the write up says, has all the attributes a good hooker needs.

Ricky absolutely needs to find a way to use him next season. I really like Havilii as a player- he's been very effective for us in many games. But... if I had to choose one for our bench 2021 I'd choose Starling. He's a potential gamebreaker in the current format.

We need to keep him around as post Hodgo planning.
Top

A strong 7.5 for me.
A great find and a breakout year.
14 games with many off the bench is why the score is not higher
Top

Tom had a very good year.

He absolutely loves being around the boys and his game will improve again next year.

Must keep him as Hodgo's replacement

Agree with BnM. New rules suit his game and he has the confidence to have a run and is a strong defender.
7/10 easy.
Top

7/10
The bloke and his level of play out of hooker absolutely saved our season. Is a genuine viable long term replacement for Hodgson. Which is just a delightful place to be for a club that struggled to fill that vital hooking role for so long

My only critic is he needs to keep working hard to improve his service from hooker, which can be found wanting at times.
CREATE PROCEDURE BotMan_Post AS
SELECT * FROM Previous_Post
EXEC quote_post
WHERE UserName = 'Aknalkfgnaa' OR 'Yeah Raiders' OR 'Billy B'
EXEC RAND(good_grief; cheak_notes; uh82cit;)

7.5 for me. He came on and did a great job of giving us another point of attack.

He will really develop his game well off the bench next season. I’m glad he’s taken a long term view of his career. One to watch.
Top

Not a bad second string dummy half. Can't think of a better one in the comp TBH - nor can I believe he extended for 2 seasons. Incredible tackle efficiency given his size. Struggled a bit for consistency and impact as the year wore on - especially in the big games, but that is understandable given he is 25 kilos playing large minutes in that role.

He could be a huge asset off the bench if Hodgo comes back fully fit and firing.