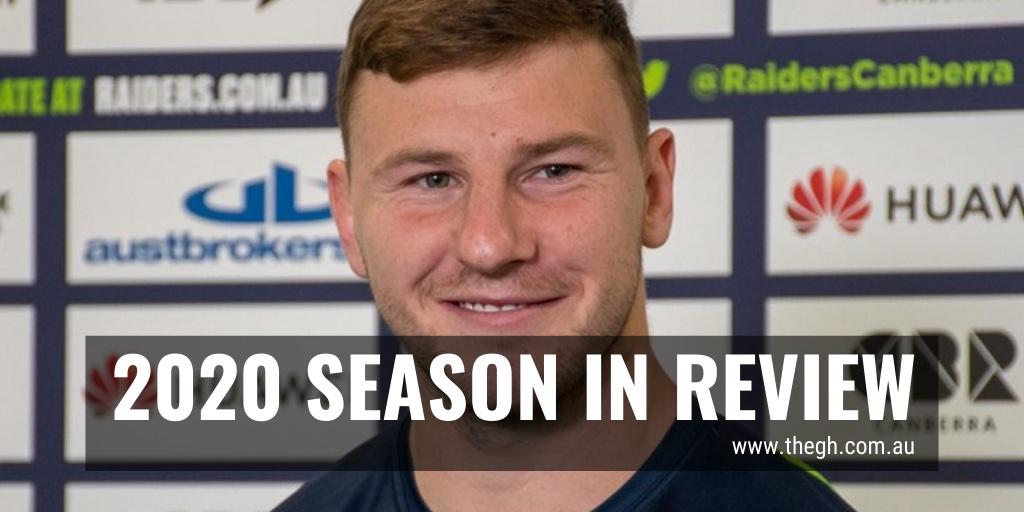 This is the tenth instalment of 2020 in review. As is the tradition, now the Raiders' season is over, we are reviewing all 32 players who pulled on a green jersey this year. So far, we've looked at Charnze Nicoll-Klokstad, Jordan Rapana, Jarrod Croker, Curtis Scott, Nick Cotric, Bailey Simonsson, Semi Valemei, Michael Oldfield and Jack Wighton.

The Raiders decided early in 2019 that they needed to move in a different direction at half back. Wigan's English representative George Williams was very deliberately targeted, with the aim of lifting the threat on offer in the halves. The negotiations took an age, with the Raiders having to fork out a large transfer fee to his English club. But the Raiders eventually got their man. Aidan Sezer, who had helped take Canberra to a Grand Final, was eventually released to English club Huddersfield.

George Williams is not a traditional organising halfback. Since 2015, he'd been playing primarily at five eighth with the Wigan Warriors. He had the reputation of being more of a runner with a good short kicking game. Many questioned coach Ricky Stuart's strategy of having two "running halves". As it turned out, the rule changes introduced when the season resumed in Round 3 - aimed at speeding the ruck and the pace of the game - suited that strategy. And, after dominant play maker, Josh Hodgson was sidelined mid season with an ACL injury, George Williams turned out be pretty darn good at steering the team around.

I rated him 6.9/10 on average through the year, with his rating impacted by an early departure from the field in Round 19. The only match he was missed was the Round 20 contest with the Sharks, when many of the regular staters were rested. I rated him an "8" in five games (Round 1 V Titans, Round 3 V Storm, Round 4 V Knights, Round 14 V Broncos, Finals Week 1 V Sharks). He won "man of the match" honours in Fans' Choice voting in three matches (Round 3 V Storm, Round 14 V Broncos, Finals Week 3 V Storm). For mine, his best match came in Week 1 of the finals against the Sharks. His two tries helped turn the match, his intercept try just before half time putting the Raiders right back into the contest. He posted 93 running metres, one line break, one try assist, one intercept, three tackle breaks, 177 kicking metres, 26 tackles and 93 per cent tackle efficiency.

Williams finished the season with seven tries, behind only Nick Cotric and Jack Wighton at the club. Only Nathan Cleary scored more tries (8) amongst the NRL half backs. He ranked first at the Raiders for try assists, and amongst the top five regular half backs in the NRL. He was second at the club for line break assists and total try involvements, behind Jack Wighton.

A lot of Williams' try assists were the result of his pin point short kicking game. He kicked more than any player at the club, and was second to Jack Wighton for kicking metres - with Wighton taking primary responsibility for the long kicking game. He produced 19 forced line drop outs, behind only Nathan Cleary (26) and Adam Reynolds (20) amongst the regular NRL half backs. His kick errors were low by the standards of his NRL peers.

Williams is certainly a half who can tackle. We found that out early, when he dumped Ryan Papenhuyzen on his back in the Round 3 win over the Storm. No regular half back in the NRL had a better tackle efficiency rate. With six try causes and 11 line break causes, he was way down the list of NRL half backs in those departments. His error count was lower than the likes of Mitch Moses, Mitchell Pearce, Adam Reynolds and Nathan Cleary.

George Williams had a very fine first season in the NRL. I don't think Raiders coach Ricky Stuart, or Raiders fans, could have asked much more of him. He did particularly well in taking on more responsibility for play making in the second half of the season. The challenge for coach Ricky Stuart in 2021 will be to get the spine working together when Josh Hodgson returns.

How did you rate George Williams' 2020? Tell us below. 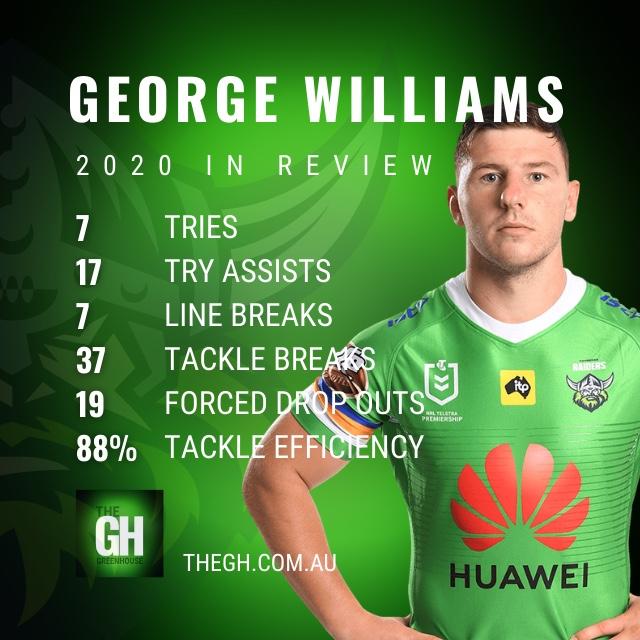 Cant fault any of that.
George was amazing this yr.
MAAAAASIVE plus for the team.
Id have him just behind Papa and Jack, so 8 sounds good.
Top

Not many English backs come here and have such an impact..well none really.

GWilly is the exception. A fantastic season from George. And plenty more to come.

Great stats for someone in their first year in the NRL! Classy player and I look forward to seeing how his game develops in 2021
'I've got 17 blokes in that dressing room that are hurting'
Top

He barely missed a beat.

Exciting half. Really keen to see what new combinations develop on the right for him. Also like him drifting over to scheme on the left with Jack 2nd receiver.
Last edited by BadnMean on November 7, 2020, 12:11 am, edited 1 time in total.
Top

Really looking forward to CHN bedding in on that right edge and Stuart giving license for the team to be more expansive in attack, in order to see his passing game come out more. A quality right centre wouldn't go astray either, so fingers crossed for Timoko.

To take a bigger picture view of things, I think his most impressive achievement (if you can call it that) is he's more or less shattered the view of the last 10-15 years that an English half can't succeed here. People doubted him both here and in the UK, yet he's managed to cement himself as probably one of the top 4-5 halfbacks in the comp.

His partnership with Jack is on track to be the best here since Loz and Stick, who are arguably the best partnership ever.
Top

Very impressive first year in the NRL. Defensively strong. Good speed too. Fine short kicking game. Plus he had a mix of center and 2nd row partners on the right to blend with. 7.5/10 for this year and with a more settled group on the right perhaps an 8+ next year.

Great recruiting of a quality player who puts in every week.
Top

Think it was a very good 8/10
For his first season in the NRL, he looked like one of the best 3-4 halfbacks in the league. Think he's got more to give if players around him step up and improve, along with the coach seeing he's our best option in the red zone and making that switch.

The biggest concern was how he'd handle the defensive side of the ball, we knew he was likely an upgrade on Sezer with ball in hand, but how much would we lose defensively? And frankly, that was probably his most impressive part, we didnt lose anything, he might even be slightly better defensively.

I really like Aidan... he's a top quality person and really good to the fans. And I think he's a very good footy player. But Williams has delivered more in just about every category but field goals.

Impressive first year.
Solid 8.
Our halves are really good..I hope we capitalise on this.
Top

I think what was really impressive was that he didn't have a bad game.

Two or three quiet ones, but not a bad one. He was just so consistent.
Top

He'll be better next year I think.
Top

Two or three quiet ones, but not a bad one. He was just so consistent.

Very true. Could go back through every game day thread and you wouldn't find a single post saying "George had a shocker".

I liked the way his game grew throughout the year and became a much more rounded player. Confident he will become our primary playmaker next year and Jack can have more of an impact role, which is his strength.
* The author assumes no responsibility for the topicality, correctness, completeness or quality of information provided.
Top

I'm so pleased that George has gone so well. He's always had the raw ability, he was doing it as a teenager for us, but I hoped he'd improve his game in the NRL, and he has. As said upthread, the challenge next season will be meshing up well with Hodgson. And I am still so annoyed that Bennett didn't trust him at international level. But I'm confident Shaun Wane, who first nurtured his talent, will think differently.
Top