Tohu was great this yr, but he played more prop this yr than edge. He just wore #12
Top

Should have been Todd Payten in a canter
* The author assumes no responsibility for the topicality, correctness, completeness or quality of information provided.
Top

Jack keeps winning the big awards when we lose big.

Didn’t even play second row
well, I guess you could say that I'm buy curious.
Top

Should have been Todd Payten in a canter

In a canter? Over the guy who took his team from missing the finals to dropping 1 game all year?

Thats what I said
Top

Not Jack Wighton, but Jared Werea Hargreaves in a last minute recount.

Because Ruan Sims apparently forgot to submit her votes for all the matches she that meant to judge but didn't watch.
Top

Should have been Todd Payten in a canter

In a canter? Over the guy who took his team from missing the finals to dropping 1 game all year?

Results vs situations.
* The author assumes no responsibility for the topicality, correctness, completeness or quality of information provided.
Top

Jack will finish on 26 then. From memory Cleary was a bit quiet in round 20. He won't be getting 3 points. Can't remember what Gutho did.
* The author assumes no responsibility for the topicality, correctness, completeness or quality of information provided.
Top

DALLY M TEAM OF THE YEAR

Cleary got squat in fantasy too.
Top

Woo hoo. Jack Wighton gets the gong
* The author assumes no responsibility for the topicality, correctness, completeness or quality of information provided.
Top

DALLY M PLAYER OF THE YEAR 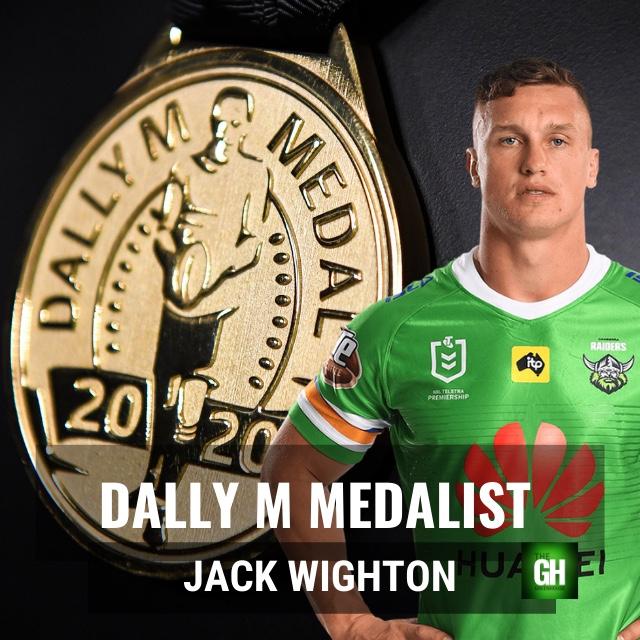 In a virtual event at the Fox Sports studios, Wighton became just the third Raider in the 42-year history of the award to win the Dally M Medal, and the first since Laurie Daley in 1995.

Approaching a dramatic Round 20, all three players could have taken out the Dally M Medal based on the final round of polling.

This year’s Dally M Awards for the first time featured a full 13-man team as its Team of the Year.

Their opponents this Sunday in the NRL Telstra Premiership Grand Final at ANZ Stadium, Melbourne Storm, scored Winger of the Year Josh Addo-Carr and Hooker of the Year Cameron Smith.

The Warriors, the Club which moved to NSW in order for the NRL Competition to resume this season, were honoured with the Provan-Summons Medal – the Spirit of the Game award. Meanwhile Roger Tuivasa-Sheck was awarded Captain of the Year and Tohu Harris Second Rower of the year.

Brisbane Broncos Captain Ali Brigginshaw will approach a Grand Final in the NRL Telstra Women’s Premiership having been honoured with the Dally M Female Player of the Year award.

The show also featured a powerful tribute to Arthur Summons and Noel Kelly.

Due to the restrictions prompted by COVID-19, this evening’s ceremony was held in three separate studios at Fox Sports, Artarmon, and featured state-of-the-arts graphics by the Fox Sports broadcast.

This evening’s ceremony featured technology used by Disney to present a live virtual event to honour Rugby League’s best and fairest. It was the first time such technology had been used in Australia.

Fox Sports used all three studios at the same time to ensure hosts and guests were separated, which has never been done for a broadcast before by Fox Sports.

“Tonight we honoured our most exceptional players in an extraordinary season,’’ NRL CEO Andrew Abdo said.

“Despite unprecedented challenges our players took our game to a new level in 2020. Tonight we celebrated our very best, those who provided so much excitement and hope during a challenging time in our community.

“Congratulations to Jack on creating history, winning the Dally M Medal in such a tough and uncompromising season. His feats will forever be etched into rugby league folklore.”

Canberra Raiders five-eighth Jack Wighton has capped a remarkable season by claiming the club's first Dally M medal in 25 years in a thrilling finish to the virtual awards night at Fox Sports studios on Monday.

The 27-year-old is just the third Raiders player to win the prestigious medal, joining his coach Ricky Stuart (1993) and three-time premiership player Laurie Daley, who won the award in 1995.

greeneyed wrote: ↑October 19, 2020, 7:33 pm The reported extract from the DT story, apparently put up early, circulating on Twitter has Jack winning on 26 points, in front of Clint Gutherson on 25 and Nathan Cleary on 24... guess we will see.

Well it was 100% accurate.
* The author assumes no responsibility for the topicality, correctness, completeness or quality of information provided.
Top

Extremely proud of Jack. Well done ! Will be Churchill winner - in 2021 (x 2 like Clyde, one in a losing team, one in a winning team).

Jack obviously wasn't expecting to win it, and seemed a bit uncomfortable with winning the award.

Huge congratulations nonetheless, he had a phenomenal year for the Raiders!
Top

Just ticking them off each year. Only the prem and the captaincy left.
I do look forward to the sack jack threads that will come of this next year.
Top

Absolutely fantastic for our club!!

It really does cement the fact that we have two of the absolute superstars of the game at our club.
Top

I’m sure he would trade both the Clive and the dally m for a premiership but shows how important he is to this team.

Massive for him and the club tbf.
If anyone had predicted this a few short years ago when he was nearly let go you would have been laughed out of town.

If we were all Panthers fans and this was their forum, there would be A LOT of posters in meltdown mode and conspiracy theories flying around

Huge congratulations to Jack - he's had another great season. Finally realising that potential of his we all knew he had.
Top
Post Reply
152 posts