For the first time in history, the Canberra Raiders will stream the 2020 Meninga Medal awards presentation to our loyal members and fans on Tuesday September 29, from the club’s new training facility in Braddon.

With the Raiders heading into week one of the Finals Series, and the team still under the NRL’s Apollo protocols, the club invite you to join us as we stream the presentation online through www.raiders.com.au.

From 7.30pm on Tuesday (September 29), Raiders members and fans can watch the presentation first-hand, with club all-rounder and “bubble” member, Andrew Bishop, the designated MC for the evening. There will be a chance to relive some of the highlights so far in 2020 and to hear from the NRL players as they receive their awards.

Who are you tipping for the big award?

I nominate affjtjtnrkktkr for Villain of the Year, he’s been back to his best form this season

Probably can't go past Papalii for this season.

Whitehead, Wighton, Williams and Tapine might be there or thereabouts but other than Papa no one has really blown it out of the park in 2020.
Top

Looking at the GH Fans award it is a three way tie between Papalii, Whitehead and Wighton. With all three not playing this weekend, and seemingly the policy to not include finals (as per the Meninga Medal) the award is over now.

Personally I think Whitehead will win the Mal. I just think that sometimes superstars like Papalii are almost expected to be great so don’t always get the votes and having already won three maybe there is a touch of bias in the judges who perhaps would like to see someone else win. Papalii hasn’t been helped by the fact in the last few games he has either been injured or rested for large parts of the second half.
Top

Rookie of the year I’d give to Grounskeeer Willie, although, as is often the case, he burned too brightly and too quickly

Remember how he was CERTAIN Soliola would take the field TWO weeks ago. Oh how we laughed.
Top

Join us from 7:30pm tonight for the 2020 Meninga Medal. It is broadcast live on Facebook via the Raiders' Facebook page!

We will announce the awards as they progress... so please join us and chat about the results as they come through.

Canberra Raiders fans... make sure you watch the #MeningaMedal tonight from 7:30pm! What's your tip for the big one? And please join us on The GH to chat about the awards as they're presented!

Broadcast underway! You can cast via Airplay! Have it on my big screen! This is exciting! They should do this every year.

I am watching after casting straight from Facebook to my TV.

The boys look slightly awkward all in their shirts and pants in the room where they have team meetings.
And to all the people who doubted me, hello to them as well. - Mark Webber, Raiders Ballboy and Unluckiest F1 Driver Ever

Meninga Medal leaderboard after Round 8

Frawley is a clever little bean, isn't he?!
And to all the people who doubted me, hello to them as well. - Mark Webber, Raiders Ballboy and Unluckiest F1 Driver Ever

I’m tipping Papa for the Meninga medal and Whitehead for the coaches award.
Top

Clubman of the Year - Dunamis Lui

Nami the Clubman!
And to all the people who doubted me, hello to them as well. - Mark Webber, Raiders Ballboy and Unluckiest F1 Driver Ever

Presenting the players who debuted with the club this year... starting with George Williams, there are 10 of them!

And chef of the year according to big Papa.
Top

Semi is so shy and sweet-spoken, but he has been absolutely great for us.
And to all the people who doubted me, hello to them as well. - Mark Webber, Raiders Ballboy and Unluckiest F1 Driver Ever

Ricky breaking up announcing this one.

Sticky genuinely choked up when announcing Sutton for coach's award. I'm so gutted for him.
And to all the people who doubted me, hello to them as well. - Mark Webber, Raiders Ballboy and Unluckiest F1 Driver Ever

raiderskater wrote: ↑September 29, 2020, 8:02 pm Sticky genuinely choked up when announcing Sutton for coach's award. I'm so gutted for him.

It is really sad for him. He was so unlucky last year.
Top

Oh god, and Sutton made top 6 for Meninga Medal as well. I'm gonna cry here in a minute.
And to all the people who doubted me, hello to them as well. - Mark Webber, Raiders Ballboy and Unluckiest F1 Driver Ever

Oooh, Tapine would be a dark horse.
And to all the people who doubted me, hello to them as well. - Mark Webber, Raiders Ballboy and Unluckiest F1 Driver Ever

Would love Whitehead to get it.
And to all the people who doubted me, hello to them as well. - Mark Webber, Raiders Ballboy and Unluckiest F1 Driver Ever

Mal Meninga about to announce the award... it is a tie!

Shows how highly rated he is. How many games did he play?
Top

Papalli and Wighton - congratulations to them both.
Top

One of the all time greats.
Top 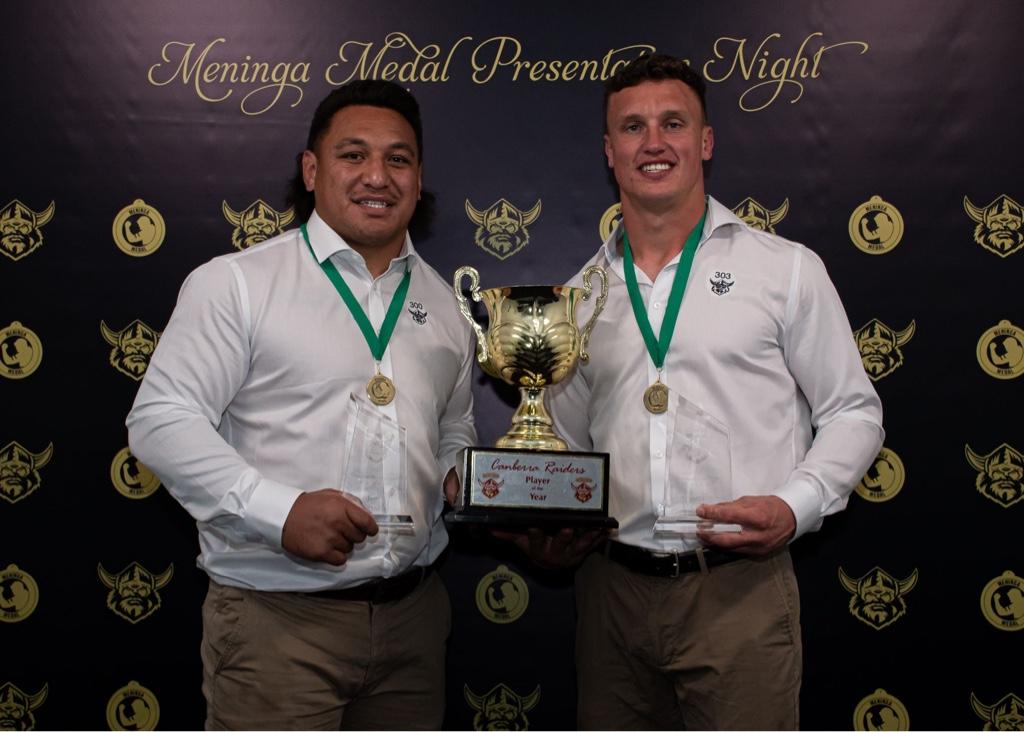 Canberra Raiders stars Josh Papalii and Jack Wighton have been named joint Meninga Medal winners in 2020, after they finished on top of the voting for the club’s player of the year award. 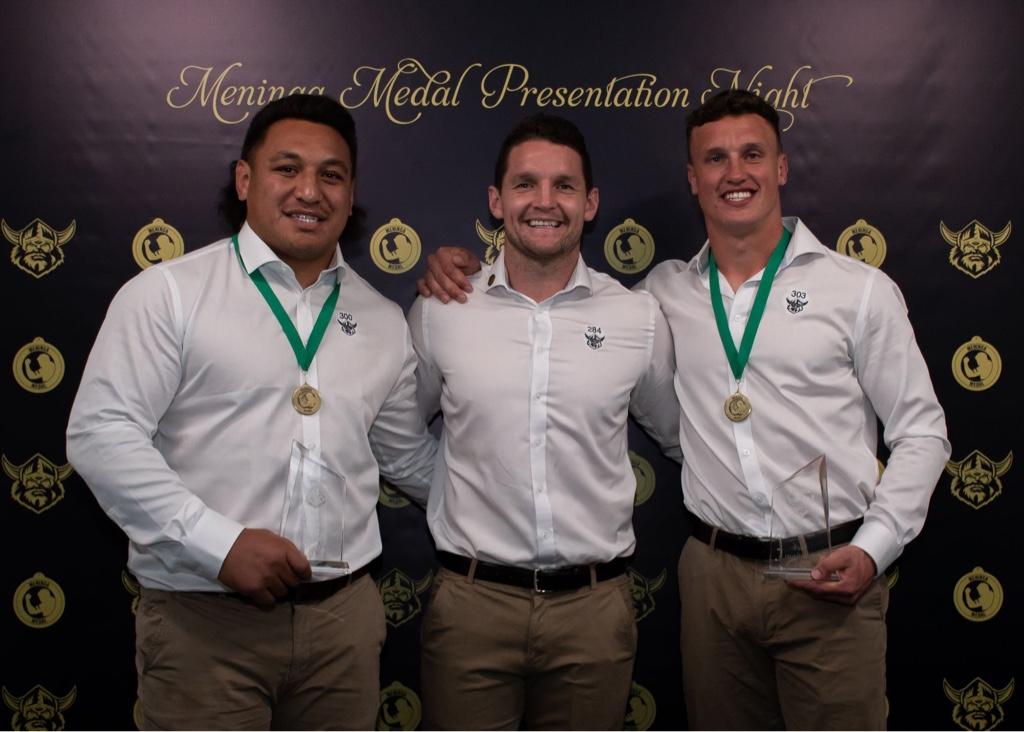 This year’s Meninga Medal presentation took on a different look, with the event hosted in-house at the Huawei Raiders Centre in Braddon, with only members of the club’s bubble able to attend the presentation.

The event was streamed through the clubs Facebook page so club sponsors, members and fans could experience the event.

The Meninga Medal is awarded annually to the club’s best player, with voting for the top honour conducted by the players and football staff weekly on a 3-2-1 basis.

At the end of 20 rounds Papalii and Wighton each finished on 15 votes, with Elliott Whitehead the next best on 13 votes.

Raiders forward Ryan Sutton was presented with the Coaches Award for his outstanding season and application to the team, while Semi Valemei collected the club’s Rookie of the Year award.

After another strong season Dunamis Lui was presented with the Club Person of the Year award for his work both on and off the field for the club, with his leadership and guidance for the club’s younger players rewarded.

Matt Frawley collected the club’s Welfare and Education award for his ongoing commitment to a career post-football in finance, as he continues to study a Diploma of Finance and Mortgage Broking. 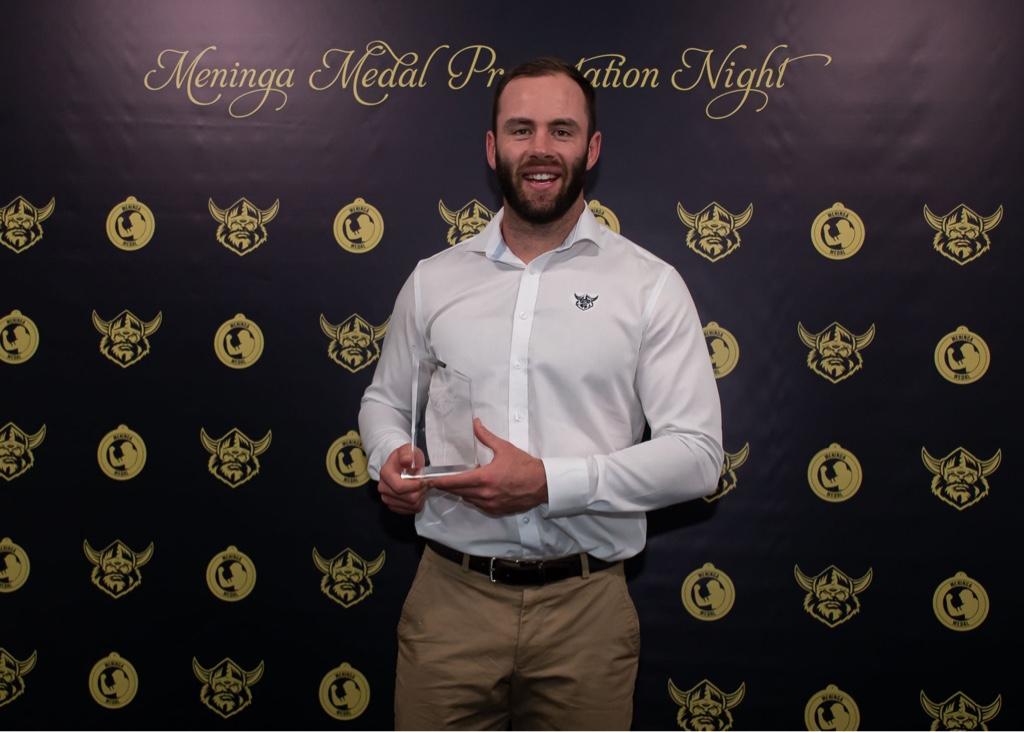 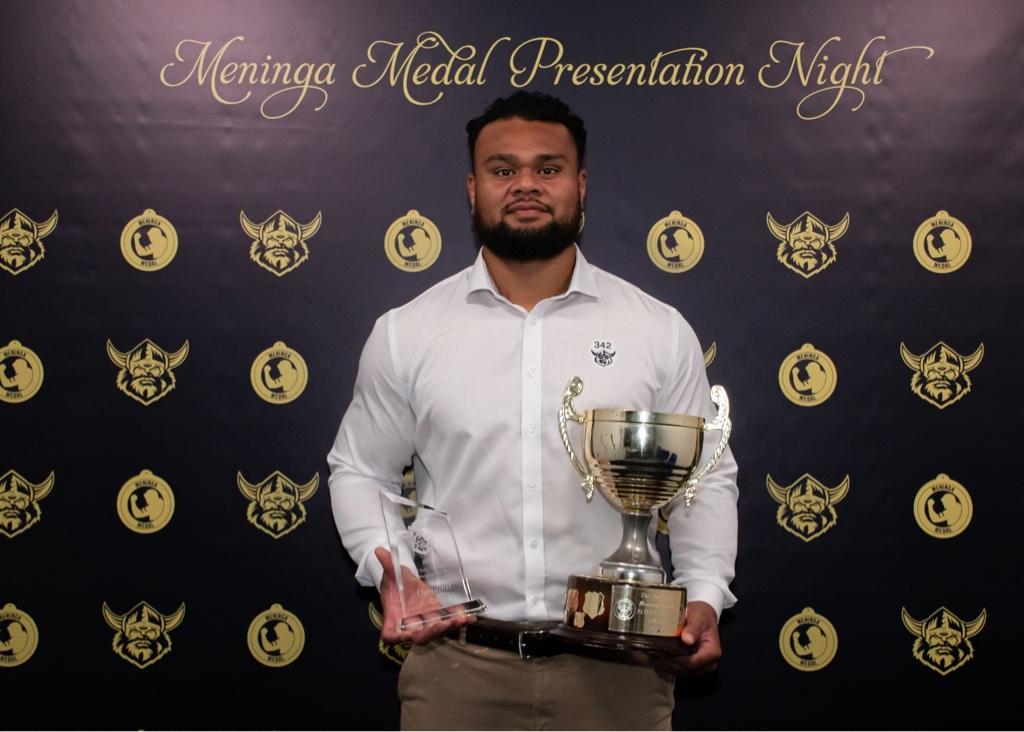 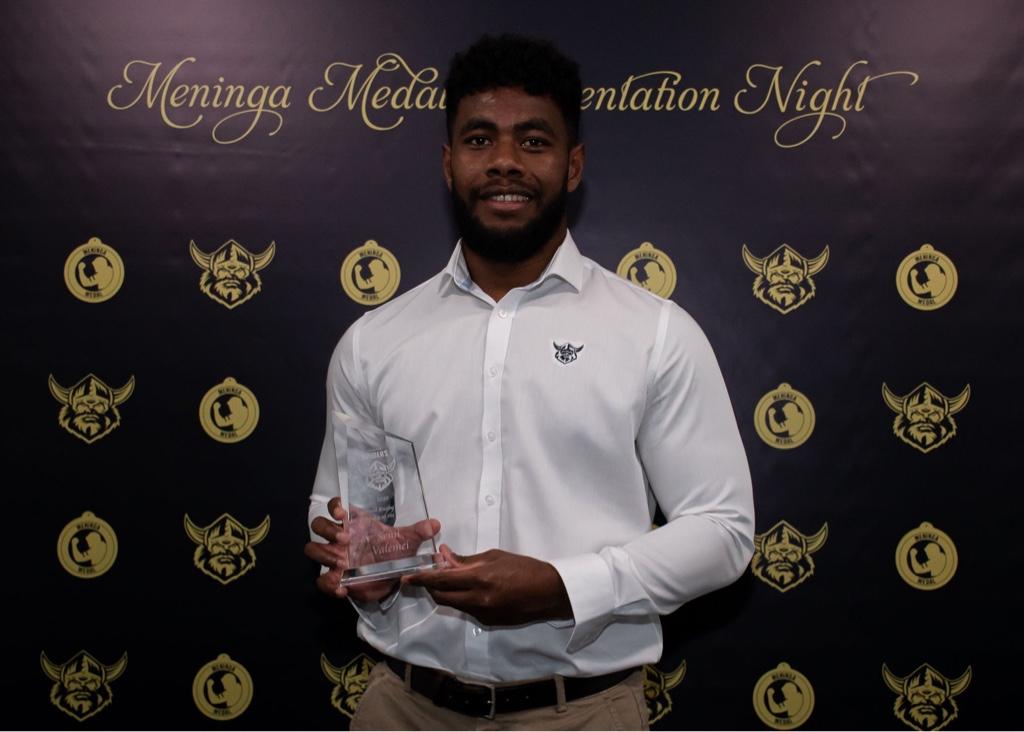 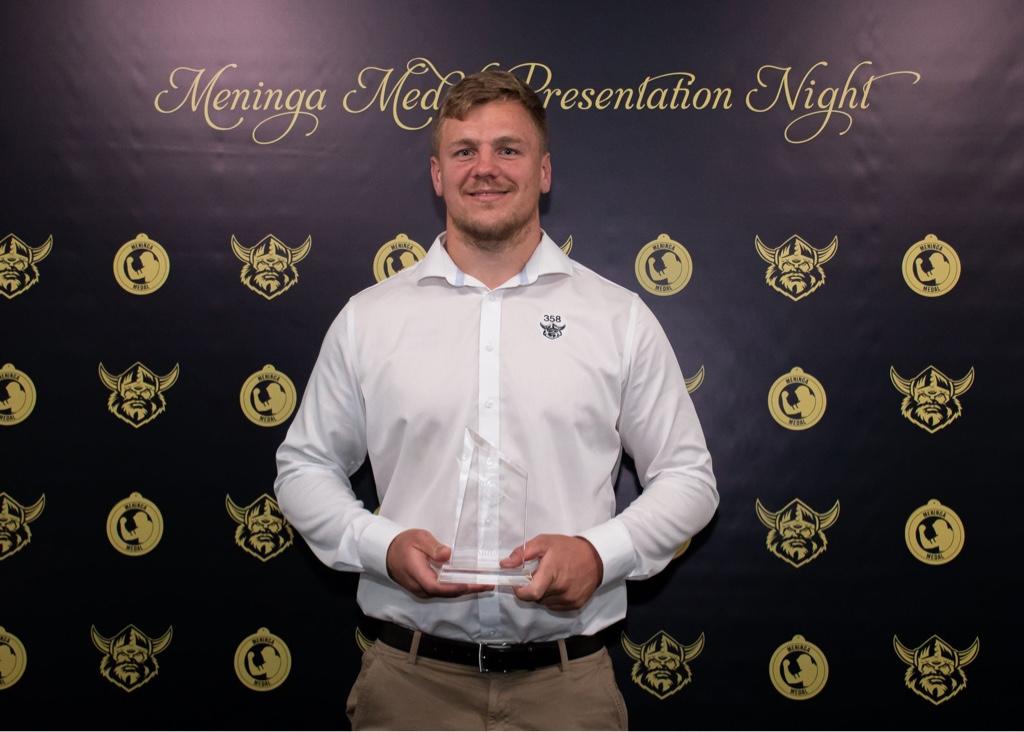 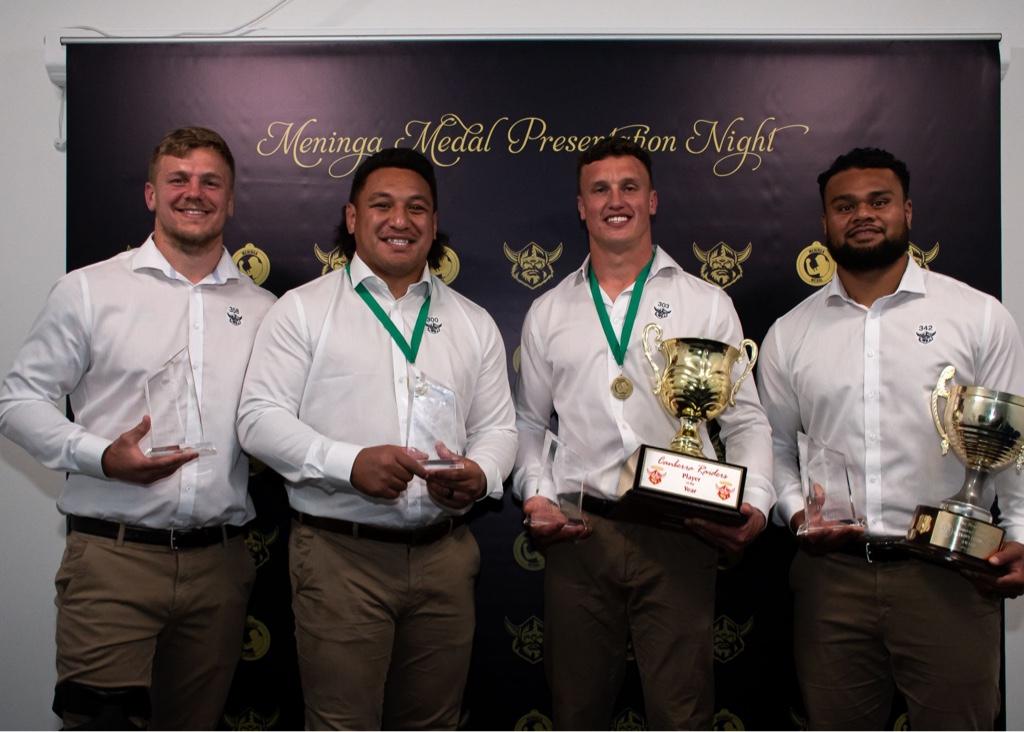 Josh Papalii claimed a fourth Mal Meninga Medal and Jack Wighton landed his first after the pair split the Raiders' most prestigious award on Tuesday.

The recently re-signed Papalii became only the second player in the club's history to win the award four times. Only Laurie Daley (six) has worn the medal more than Papalii.

Papa: "We still have four games left..." HELL YEAH PAPA WE SURE DO
And to all the people who doubted me, hello to them as well. - Mark Webber, Raiders Ballboy and Unluckiest F1 Driver Ever

Bay53 wrote:Papalli and Wighton - congratulations to them both.

Let’s not get too carried away. A recount tomorrow will show they also tied with Whitehead and Williams.
Top
Post Reply
50 posts