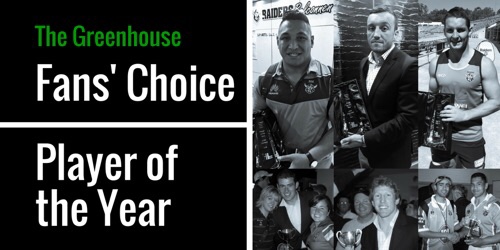 The Fans' Choice Player of the Year has been awarded since 2004 with an impressive roll call of winners, including Ruben Wiki, Alan Tongue, Terry Campese, Shaun Fensom, Jarrod Croker, Josh Hodgson, Jordan Rapana and Nick Cotric. Josh Papalii won the award for a record third time in 2019. An individual trophy, sponsored by The Greenhouse, is presented to the winning player at season's end.

Each week, all the points awarded by everyone to each player each round will be aggregated and then the top three players will be awarded 3, 2, 1 points. This week, voting will close at midday Monday.

Thought they were the best on field, HSS and Timoko really good too i thought.
CHN and Young not great, needed better from them in this sort of game
CREATE PROCEDURE BotMan_Post AS
SELECT * FROM Previous_Post
EXEC quote_post
WHERE UserName = 'Aknalkfgnaa' OR 'Yeah Raiders' OR 'Billy B'
EXEC RAND(good_grief; cheak_notes; uh82cit;)

Sent from my Mi A1 using Tapatalk

Havili and Sia honourable mentions
* The author assumes no responsibility for the topicality, correctness, completeness or quality of information provided.
Top


Sent from my ELE-L29 using Tapatalk

(forgot to put my votes in after the game)
One day the Raiders and the Cats win the same year and make my head explode!!
Top

Hi all, just a quick reminder that voting will close at midday today so we can tally the final votes.
Top

The following players have picked up points towards the 2020 Fan’s Choice Player of the Year award in the Canberra Raiders Round 20 win against the Sharks. Thank you to all who voted on The GH and on our Facebook Group page.