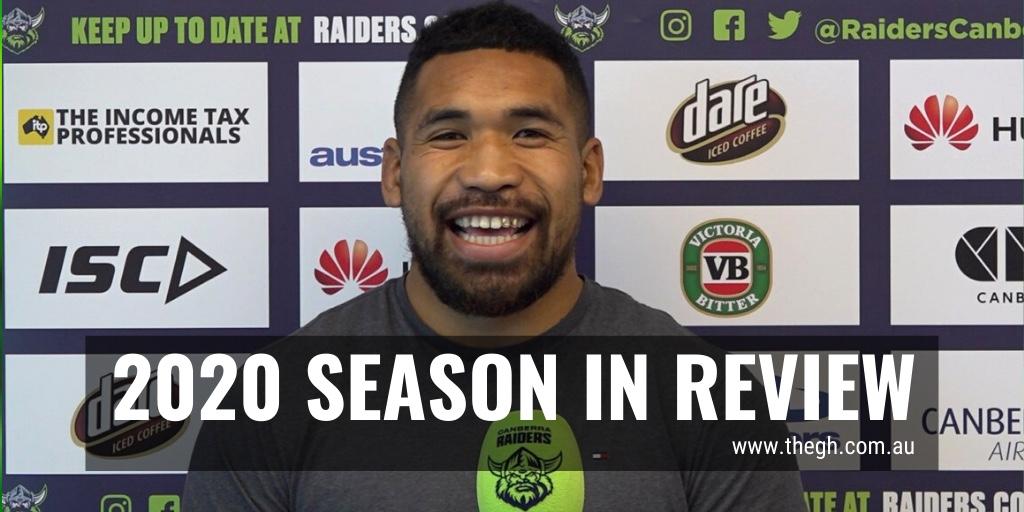 This is the fourteenth instalment of 2020 in review. As is the tradition, now the Raiders' season is over, we are reviewing all 32 players who pulled on a green jersey this year. So far, we've looked at Charnze Nicoll-Klokstad, Jordan Rapana, Jarrod Croker, Curtis Scott, Nick Cotric, Bailey Simonsson, Semi Valemei, Michael Oldfield, Jack Wighton, George Williams, Josh Papalii, Josh Hodgson and Tom Starling.

Siliva Havili came to the Raiders in 2018, as cover for hooker Josh Hodgson, who had been sidelined with an ACL injury. He ended up playing every game of the season for the Raiders, and made an unexpected splash at starting hooker in the first 14 rounds. Fast forward to 2020, and Havili again needed to stand in for an injured Hodgson for half the season.

Hodgson suffered a second ACL injury in the Round 9 clash with the Storm, putting him out for the year. Subsequently, Ricky Stuart mostly started matches with Havili in the No. 9 jersey, and he took the big hits in the opening stages, before the smaller Tom Starling took over at dummy half off the bench. It was a very effective partnership, with both players bringing very different strengths to the role.

Havili played in every match in 2020, with nine at starting hooker, one at lock and 13 off the bench. I rated him an average of 5.6/10 through the season and a "7" in two matches. For mine, his best games came in the Round 10 Grand Final re-match against the Roosters, and the Round 20 win over the Sharks. He picked up two Fans' Choice Player of the Year votes in the Round 6 clash with the Sea Eagles at Campbelltown. His highest metres gained (160) came in the "Rookie Raiders" Round 20 victory, while his top tackle count (35) came in the Round 9 loss to the Storm.

Havili's average minutes rose in 2020 to 35 minutes per game (28 in 2019) - reflecting his switch to starting hooker. His statistics are a little difficult to compare to those of other hookers, and with 2019, because of his mixed role this season - hooker and middle forward. He ranked seventh amongst the Raiders forwards for total try involvements, and well down the list on a per match basis. His average running metres per game rose a bit (61, compared with 52 in 2019), but his metres per carry fell slightly (to nine). He ranked eighth amongst the Raiders forwards for tackle breaks (12, down from 23 in 2019 and 32 in 2018).

In defence, his tackle efficiency rate was still strong (93 per cent) - equal third at the club, alongside Joe Tapine, and behind Josh Papalii and John Bateman. His average tackles per match rose to 18 (16 in 2019 and 22 in 2018). He conceded two try causes and three line break causes. His error count rose to 11, behind only Elliott Whitehead amongst the Raiders forwards.

Havili says hooker is his favourite postition and he probably makes more impact in that role. He's not the most creative hooker, and on a majority of the statistics, he'd now rank behind Tom Starling. But Havili deserves a lot of credit for taking those big hits early in matches. That allowed Starling to more effectively show his wares. And when Starling started, he mostly didn't play as well as when he came off the bench. So it was a genuine partnership that Havili and Starling had. In addition, Havili deserves a lot of credit for very willingly playing the role of a utility forward. He was basically prepared to do anything the coach asked - in the midst of the Raiders' injury crisis. He very deservedly gets marked up for his contribution to the season overall.

Looking to 2021, Havili might find it tough to force his way into the top 17 every week. Starling is probably now in front of Havili as a bench hooker, while there are plenty of young forwards vying for spots in the middle and in the back row - with the likes of Guler, Horsburgh and Sutton returning from injury. But the club is fortunate to have a player like Havili, who really did step up to the challenges thrown his way in 2020. 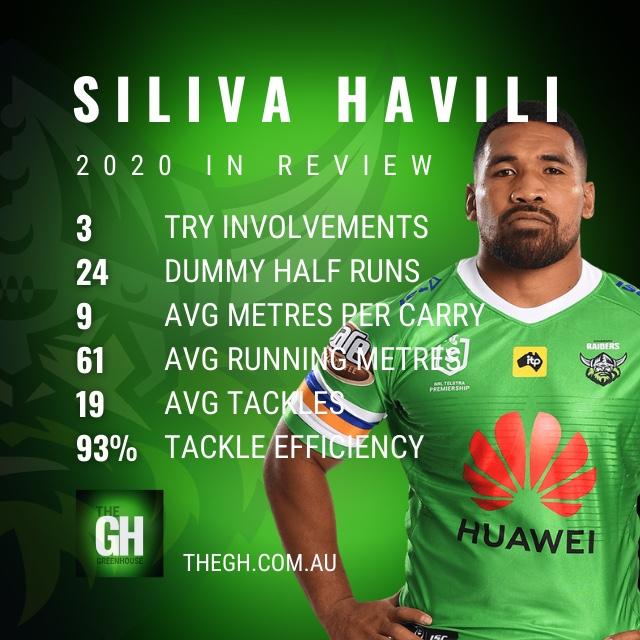 Liva is one of those lovable guys in the team. His versatility is a massive squad benefit, esp for a top 17 guy. However, Liva isnt a game breaker, nor a difference maker in a wk to wk season - final vs the Chooks not withstanding. Very handy player, that has good and bad moments.
I gave Starling a 6.5-7, and I think his impact on the team was greater than Liva's. So, I cant agree with giving him the same score, so ill go 5.5-6.
Top

He might find limited opportunities with Hodgo and Starling on deck as he'ld likely struggle to push his way up our glut of middles as a pure forward (even though he's not bad at all, in fact he's a solid FGer at most clubs).

If he was happy with the money, I can see why he activated his option though. He's settled, happy, at a succesful club who know they are knocking on the door of a premiership year on year and the starting hooker is just coming back from a 2nd ACL reco... honestly those can be 50/50. He'd also give himself a shot at winning a bench role through versatility.
Top

I like him in the team in the back 20 of each half running up the guts of tired defenses. Don't want him anywhere near playing hooker though.

Unfortunately he's always good for at least one handling error at a crucial time. If he cut that out he could be a regular on the bench every week, until then excellent for squad depth.
Top

6/10
He played a few different roles for us, stepped up when Hodgo went down, his versatility is really strong benefit. Whatever role he was given he did it well and never let anyone down. A lot of love and respect for his game and his role in our team. Curious to see what 2021 holds for him in our top squad.
CREATE PROCEDURE BotMan_Post AS
SELECT * FROM Previous_Post
EXEC quote_post
WHERE UserName = 'Aknalkfgnaa' OR 'Yeah Raiders' OR 'Billy B'
EXEC RAND(good_grief; cheak_notes; uh82cit;)

Mr Versatile who plays hooker or middle. Always makes ground with the ball because of his nugget shape and powerful legs. Defensively reliable. He had 7 kicks for 291mtrs so he kicks more than 40 mtrs on average. This is a part of his game which in under-utilised imo. In those times when we are struggling to get out of our end it would be to our advantage to kick earlier in the tackle count from dummy half when the opposition wingers are up. Have it as a set play on the third or fourth tackle. With the side aware, the kick chase can get down field to smother the run of the full back and hopefully drive back the next couple of ball carriers. Attacking defensive play applies pressure and may lead to a turnover. Another good season from Siliva. 6.5/10.
Top

Hard to believe this bloke is our third string dummy half. Offers something completely different to Hodgo and Starling. Solid in defence with a genuinely powerful running game in short bursts. Underrated kicker too. Sometimes his service out of dummy half lets us down with a few too many passes going to ground or behind the halves.

Was invaluable after Hodgo went down though.

Except that field goal attempt..