Try to Penrith #2 Jenkins. They finally get a bit of possession. #5 May makes a break and gets coat hangered by Aetkins. A few players later they switch to the left lovely little grubber from Tago and Jenkins scores in the corner. Falls conversion from the sideline right over the black dot. 10-6
Last edited by Bay53 on April 9, 2021, 6:23 pm, edited 1 time in total.
Top

As good a half of reserve grade as you will ever see. I thought we were really getting on top for a while there but Penrith hit back strong and looked the more dangerous towards the end. Nami and Guler gave us a really good platform but the stand out has been CHN. I assume he will be done now and be 18th man. Often when players are only going to play 40 they go through the motions but he was in everything.

Set up for a great second half.
Top

Still 24 degrees here, only expected to be 18 by the end of the game. No wind.

Packed house on Friday night footy against the benchmark. If we can’t get excited about this one boys and girls, give it away.
Top

Second half underway, with the Panthers kicking off.
The Greenhouse score update service
Top

As flagged, CHN not back -18th man
Top

Anderson just taken into touch after a great ball from Timoko. Had most of the possession so far but no points in the second half yet
Top

Frawley turns over the ball and gives them field position. Salmon grubber a through Horsburgh fails to gather and Salmon picks up again to score. 10-10 kick to come.
Top

51st min TRY PANTHERS to Jaeman Salmon. His grubber kick rebounds off the Raiders and he picks up the ball and scores. Kurt Falls converts.

Great pick up and run 60m by Cook. Inside ball from Williams to Guler first touch coming back on and he drops it with only one to beat.
Top

Super ball from Naden out of the back of the hand to Jennings who scores for the Panthers. Naden was very close to the white line but didn’t consume it.

Falls conversion off the upright off the crossbar but over. Penrith 18-10
Top

Valemei makes a 50m break but when we have them under pressure O’Donnell drops cold.
Top

Bay53 wrote: ↑April 9, 2021, 6:47 pm Super ball from Naden out of the back of the hand to Jennings who scores for the Panthers. Naden was very close to the white line but didn’t consume it.

Falls conversion off the upright off the crossbar but over. Penrith 18-10

Sounds ikea Naden is really having a crack.
* The author assumes no responsibility for the topicality, correctness, completeness or quality of information provided.
Top

Another try to Penrith. Falls cross kick looks to be too long and Anderson to catch in goal but #4 Tago flies across takes it and scores. They have been far too good.

They are a good side but we were poor after a good start. Must say our halves are really struggling to have any impact.

Plenty of depth at Penrith. They signed Eddie Blacker this week from Dragons, he was the best forward on the park after he came on.
Top

Hope my updates were helpful when there is no other live media of the game.

On to first grade!!
Top

The Penrith Panthers have defeated the Canberra Raiders 24-10 at Panthers Stadium in the NSW Cup.

A strong second half helped the NSW Cup Panthers to an upset 24-10 victory over Canberra Raiders at Panthers Stadium on Friday. Taking on a team boasting considerable NRL experience, the young Panthers overcame a slow start to secure the win with three second half tries. 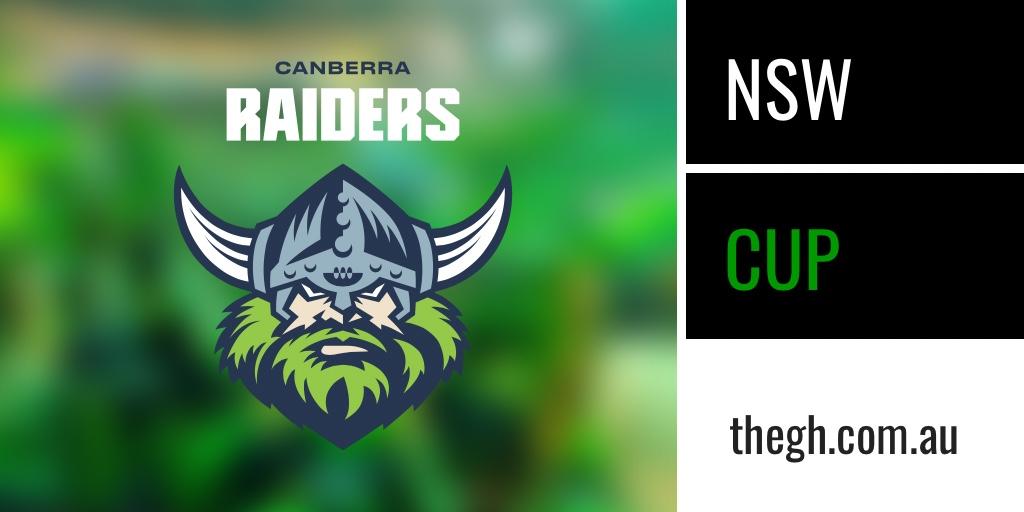 Last round: The Canberra Raiders suffered a 24-10 defeat at the hands of the Penrith Panthers in Round 5 at Panthers Stadium. The Raiders scored the first two tries of the match, through Corey Horsburgh and Caleb Aekins - and led 10-0 after 25 minutes. But that was the last point at which the Raiders would trouble the score board. Panthers winger Thomas Jenkins scored a try just before half time - ensuring the Panthers trailed by just four at the break. And then it was all Penrith in the second half, with Corey Harawira-Naera only playing in the first 40 because he was the 18th man for first grade.

This week: The Raiders face the fourth placed Parramatta Eels at Canberra Stadium in Round 6. The Raider have slipped to fifth on the ladder, having started the season with two wins and two losses. The Eels have a 2 and 1 record so far in 2021, having produced a narrow victory over the Jets (22-20) and a big win last weekend over the Dragons (40-8). The Eels have a slightly better attacking and defensive record than the Raiders. Parramatta has averaged 30 points scored (Raiders 28) and 20 points conceded (Raiders 24) per game.

Team news: Caleb Aekins will make his NRL debut in green this week, with Charnze Nicoll-Klokstad sidelined due to a neck injury. Adam Cook takes over the No. 1 jersey in NSW Cup. Toby Marks comes into the team on the wing, replacing Semi Valemei. Brad Schneider has been named at halfback, with Sam Williams out with a rib injury. Corey Horsburgh will partner Dunamis Lui at starting prop, with Emre Guler promoted to first grade. Darby Medlyn takes over at lock. Keaton Meads and Sila Titiuti have been added to the bench. On Friday evening, Matt Frawley and Dunamis Lui were omitted from the NRL squad to face the Eels, so they will definitely take their place in the NSW Cup team. Former Raiders Michael Oldfield and Makahesi Makatoa will line up for the Eels.

Oldy played his first game for the Eels last week and returns to Canberra Stadium. Makahesi Makatoa has obviously returned to Australia after leaving the Raiders and going over to the English second tier for a couple of years. I assume he is not in their top 30.
Top

Welcome to our coverage of this evening's NSW Cup clash between the Canberra Raiders and Parramatta Eels at Canberra Stadium. Blue skies, a few clouds, a cool autumn afternoon in the nation's capital. We'll have live scores in this thread from 5:15pm.

This really should be televised

Canberra Raiders kick off, we are underway!
The Greenhouse score update service
Top

5th min TRY EELS to winger Haze Dunster in the corner. Simple overlap, after the Eels spin it wide on the last. Jordan Rankin can’t convert from the sideline.

11th min TRY RAIDERS to Corey Harawira-Naera, he chases a Matt Frawley cross field kick and plucks it out of the air to score! Relatively easy conversion from Brad Schneider.

16th min TRY EELS to winger Haze Dunster, already his second. The Raiders were on the attack, 30m out... dropped ball and Dunster runs 70 to score. Jordan Rankin converts.

Raiders kick off out on the full.
The Greenhouse score update service
Top

32nd min TRY EELS to winger Solomone Naiduki. The Raiders had a try disallowed for an obstruction... and the Eels get the 12 point turnaround pronto. They throw it wide on the last and it comes up points, again. Converted Rankin from the sideline.

CHN shouldn't be in the first grade team but apparently

We’re underway in the second half.
The Greenhouse score update service
Top