49th min TRY RAIDERS to five eighth Mitch Spencer. It’s off the back of a forced line drop out, good defence. Tupou converts.

16 mins to go TRY EELS to Maximus Tupou off the back of a few Raiders errors. No conversion.

7 mins to go TRY RAIDERS to Connor Williams, he’s little, but jinks and ducks his way over. Junior Tupou converts. Raiders making the most of the wind at their backs in this half.

Good win against the usual heavyweights of the SG Ball competition.
Great confidence win for the TG Cup side.
Unlucky for the HM side to come up against a rep stacked Eels side.
Top

It was a terrific result for Tarsha Gale Cup, well done to them.

Matthews was a struggle, they looked the better side in the first half, but were outplayed in the second half. Second rower Kaden Williams was the best Raider for mine.

SG Ball looked very good at the start of the match, and then were clearly the better team in the second half, with the wind behind their backs. Jayden Clarkson was the best Raider in my view.

Did the girls recruit well in the off season? Didn't they struggle to win last year?
Top

There were quite a few familiar names in the team, but there are new faces and new coach. 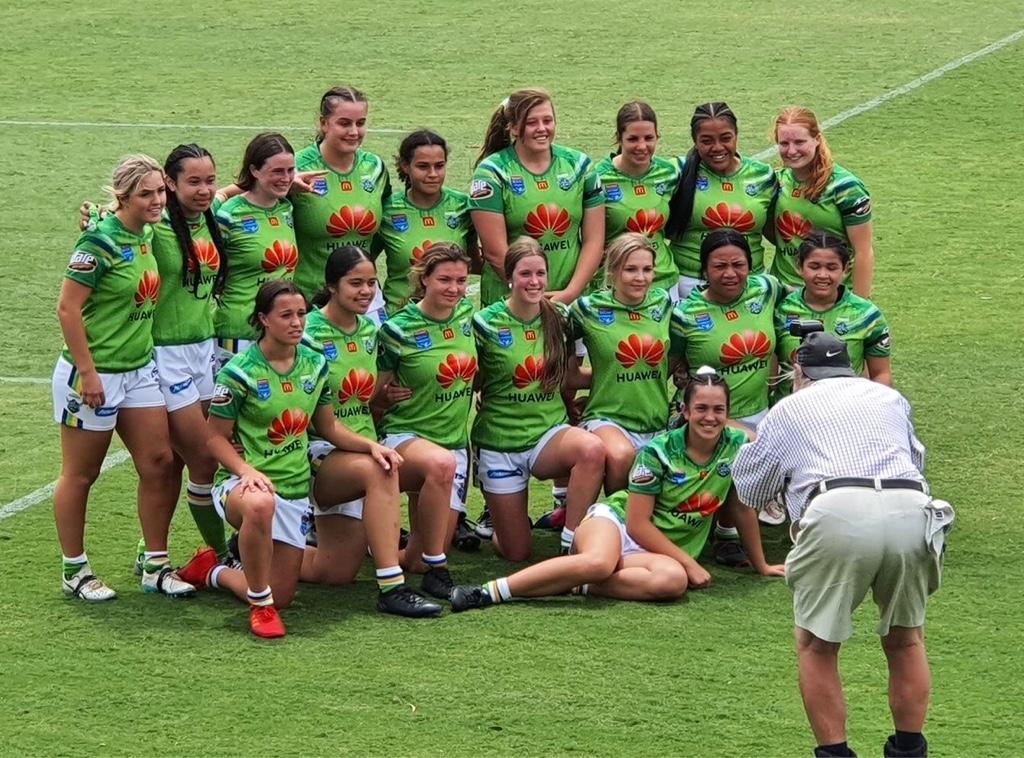 The Canberra Raiders were the only winners in the Harvey Norman Tarsha Gale Cup over the weekend. They beat Parramatta 30-8 in the only game that went ahead throughout the competition. The Raiders were knocked out of last year’s finals series by the Eels to the tune of 48-4 making this result a remarkable turnaround.

Canberra could be a smoky this season thanks to the signing of rising forward Trey Mooney. Veteran Raiders recruitment officer Peter Mulholland pulled off a major coup when he managed to lure Mooney from Parramatta to the nation’s capital. Mooney excelled in the Eels’ junior ranks, paving the way for him to represent his state and country.

Harold Matthews: ‪ Raiders ranked 11th: Canberra has a young side made up of players from Eden, Griffith and western Sydney, so they could take time to gel. Once they do, Though, the rising Raiders will be competitive. Hooker Blake Metcalf is a classy player, who will ensure Canberra is competitive. https://www.dailytelegraph.com.au/sport ... c7614d6d7‬

My mate's daughter picked to debut for the knights women's team, pretty cool to see - he was a dominant junior in our comp and has 4 daughters so good to see the genes continued

The Canberra Raiders turned around a 12-10 halftime deficit against the Parramatta Eels to claim an important victory at Raiders Belconnen.

Early tries to Michael Asomua and Jayden Clarkson gave the Raiders an early lead before Parramatta hit back midway through the first half.

Budding star Ethan Foster is already having an impact in Canberra but will have to wait to make his debut. 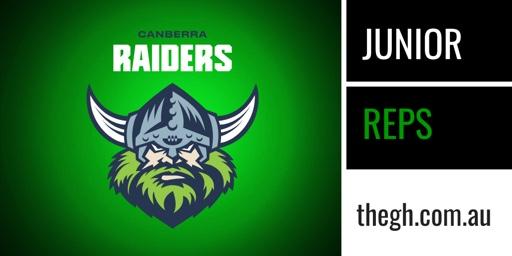 AT A GLANCE: The Canberra Raiders Tarsha Gale Cup side comprehensively defeated the Parramatta Eels, 30-8, last Saturday. It was the only Round 1 match in Tarsha Gale Cup to proceed, due to the inclement weather in Sydney last weekend. The Raiders were knocked out of the 2019 finals by the Eels in Week 1 last year, when they suffered a 48-4 defeat - so it was an extraordinary 66 point turnaround for the Green Machine. The Raiders scored the first try when Holly Jane Cristison crossed in the 10th minute - and it was all the Raiders from there in the first half. They led 22-0 at the break.

The Raiders meet the Penrith Panthers in Round 2 - a team that finished sixth in 2019, posting a four and five record. The Green Machine won only twice last season and they have lost both of their previous meetings with the Panthers (32-0 in Round 6, 2019 and 44-32 in Round 2, 2018). The first round result, however, offers a promise that 2020 will be different for the Raiders.

AT A GLANCE: The Canberra Raiders Harold Matthews team suffered a 14-4 loss to the Parramatta Eels in Round 1. It was a tight tussle in the first half, with the teams going to the break all tied up at 4-4. If anything, the Raiders were the better side to that point. But the Eels overpowered Canberra in the second stanza, with the home team making too many crucial errors. Centre Siamani Leuluai scored the only try for the Green Machine - a stunning 95 metre intercept effort in the 22nd minute. Second rower Kaden Williams impressed for Canberra, repeatedly threatening with the ball in hand.

This week, the Raiders face the St George Dragons, the wooden spooners of 2019. The Dragons had been scheduled to meet the Central Coast Roosters in Round 1, but it was one of the contests postponed due to the downpour that hit Sydney and surrounds last weekend. The Dragons won the Round 5 match between these two clubs last year, 26-12, in Sydney. Both teams won just one of their final five games in 2019. It should be an interesting test for the Raiders on Saturday.

In team changes for the Raiders, Brock Sing moves to fullback, with Penieli Fao moving into his five eighth spot. Clay Sing moves to lock, with Owen Hromow swapping into the second row. The Raiders are yet to name players for a number of spots in the three quarters.

AT A GLANCE: The Canberra Raiders produced a very good 30-16 first round win over the traditionally strong, Parramatta Eels last Saturday. The Eels led 12-10 at half time, with both teams scoring two tries. Winger Michael Asomua was first to score, with the move set in motion by a brilliant flick pass from second rower Clay Webb. The Raiders went further in front - taking an early 10-0 lead - when prop Jayden Clarkson crashed over in the 11th minute. Parramatta fought back with a double to fullback Tryone Sau.

However with a strong wind at their backs, the Raiders dominated in the second half - piling on three tries. Junior Tupou scored a brilliant intercept try in the 45th minute, running 90 metres to score. Five eighth Mitchell Spencer followed up five minutes later, capitalising on a forced line drop out. Connor Williams iced the game with seven minutes remaining, jinking and jagging his way to the line. The high profile recruits of Trey Mooney and Caleb Esera impressed, but the best on field was prop Clarkson.

This week the Raiders meet the New Zealand Warriors - who had a 36-16 win over the Victoria Thunderbolts in Auckland in Round 1. While the Warriors conceded the first try, they were in control for most the match, scoring six tries to three. Half and captain Sione Moala scored a double. It is the Warriors' first season in SG Ball, after the club dropped out of Jersey Flegg to switch to the Under 18s competition.

The only changes for the Raiders are on the bench, with Ethan Foster and Eneseli Kamuta included, while Jack Williams and Henry Alesi drop to the reserves list.

It should be a good test for the Green Machine, but we'll tip the Raiders at home.

After an impressive start in Round 1 against the Parramatta Eels, the Canberra Raiders Tarsha Gale Cup side will be looking to continue building momentum throughout the season.

“We’ve done a lot of hard work over a three month period and the girls worked really hard,” Hawke said. “I think [the result] is a reward for the work that they did do and a bit of belief in themselves.”

The Andrew Johns (Under 16s) and Laurie Daley (Under 18s) Cups kick off this weekend.

The Colts kick off against the GSR Wests Tigers at Kirkham Park, Camden on Sunday, while the Bulls play the Western Rams at Spooner Oval, Forbes on Saturday. Some team lists are not yet available, or are not complete. Matches are live streamed on NSWRL.com.au and the NSWRL Facebook page.

Welcome to our coverage of today’s Junior Representatives match at Raiders Belconnen. This post updates with live scores in the Tarsha Gale Cup match between the Canberra Raiders and Penrith Panthers.

Welcome back to our coverage of today’s Junior Representatives match at Raiders Belconnen. This post updates with live scores in the Harold Matthews match between the Canberra Raiders and St George Dragons.

Wow the girls team is going great guns. After being behind the pace the past couple of years to thrash two western Sydney teams in a row is massive.
Top

Welcome to our coverage of today’s SG Ball clash between the Canberra Raiders and NewZealand Warriors. Raiders kick off! We are underway at Raiders Belconnen.
The Greenhouse score update service
Top

3rd min TRY RAIDERS to Connor Williams! The ball goes in the air in the red zone. and the Raiders regather through Williams! Converted Junior Tupou.

8th min TRY WARRIORS to half Sione Moala. The Raiders put in a kick in the Warriors red zone and it ends in the hands of the Warriors captain... and he has open field in front of him. Ran 90 metres to score under the posts. He converts his own try.

16th min TRY WARRIORS to Josiah Karapani. It is off the back of three straight penalties to the Warriors. They’re a very big and physical side and the Raiders can’t afford to give them field position. Converted Moala.

21st min TRY RAIDERS to Junior Tupou! The Raiders get a penalty for a high shot and they make a raid! Held up over the line in the lead up. Tupou converts from out wide.

26th min TRY RAIDERS to Kane Smith. The Warriors bombed a try and then the Raiders quickly took it to the other end. Tupou with some damaging runs. He converts the try.

31st min TRY WARRIORS to Zyon Maiu'u. They put in a kick on the last tackle and the Raiders knock on. Simple pick up to score the try. A strip In the lead up gave the Warriors field position. Sebastyn Jack converts.

34th min TRY WARRIORS to hooker Tanilla Otukolo under the posts. Costly just before the break. Moala sets it up with a good break and pass inside. Jack converts.

Warriors kick off to start the second half. Check The GH Instagram and Twitter for video and pics.
The Greenhouse score update service
Top

42nd min TRY RAIDERS to Ethan Foster. Deserved, he’s been putting in some hard work off the bench. He falls over the line on his back and somehow grounds it. Junior Tupou converts.

17 mins to go TRY RAIDERS to Jack Williams out wide. A double! The Raiders have got into the grind and they’re coming out on top at the moment. Junior Tupou can’t convert, hits the post.