17th min TRY MOUNTIES in the corner to Tony Satini, no conversion from the sideline for Andre Niko.

33rd min TRY MOUNTIES to Royce Hunt, takes a great pass and runs as fast as a winger up the middle! Converted Andre Niko from in front.

Sea Eagles kick off to start the second half. And it’s over the sideline on the full! Very windy out there.
The Greenhouse score update service
Top

56th min TRY SEA EAGLES to Tyler Cassel, the result of a ricocheted kick. Second of the day. Converted.

14 to go TRY SEA EAGLES to Tyler Cassel, hat trick for him. Followed a grubber and somehow regained control after tapping it in the air. Converted. Huge collapse from Mounties.

11 to go TRY MOUNTIES to Sebastian Kris. Desperately needed! No conversion Williams from out wide.

The Mounties were able to hold defeating the Blacktown Workers Sea Eagles 30 - 26 in a tight finish at Canberra Stadium on Saturday afternoon.

A try just 10 minutes out from full-time from Sebastian Kris has helped the Mounties survive with a enthralling 30-26 victory over the Blacktown Sea Eagles at Canberra Stadium on Sunday.

80 minutes as well. Usually an indicator he will be back in firsts soon.
Top 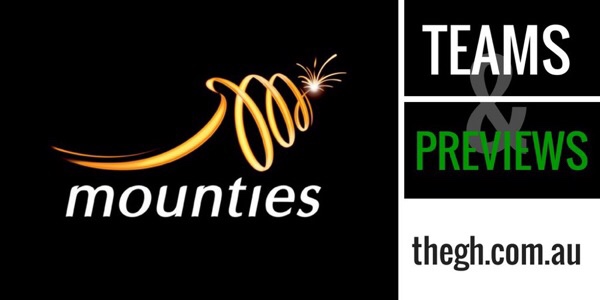 Last week: The Mounties made it three wins in a row on Sunday when they defeated the Blacktown Sea Eagles 30-26 at Canberra Stadium. Mounties went to the half time break leading 26-4, having piled on five tries. However, the Sea Eagles scored four consecutive tries in the second half in the space of 20 minutes, to level the match at 26 all with 15 minutes remaining. A try to Mounties centre Sebastian Kris broke the deadlock in the the 67th minute - with Mounties ultimately "getting out of jail".

Mounties rested Sam Williams and Siliva Havili after roughly 40 minutes, ensuring they could step in for the Raiders should any player not get through the NRL warm up. The Sea Eagles rested Lachlan Croker in similar fashion in the second half. While Mounties were affected by the loss of the two players, it was worrying that they again showed signs of a second half fade - which has been so costly in other games this season.

This week: In the final round of the regular season, Mounties face the North Sydney Bears at Aubrey Keech Reserve on Saturday. Mounties remain in sixth place on the competition ladder - but they can jump over the fourth Bears, with a victory.

Can Mounties finish in the top four? For a start, Mounties have to win on Saturday. Then they'll be hoping that the second placed Dragons can beat the third placed Bulldogs. If that happens, Mounties would join the Bulldogs on 27 competition points - and would overtake them on points diffential. It would also help Mounties if the last placed Sea Eagles could beat the fifth placed Panthers - but that's not really likely, or necessary. A Mounties win and a Bulldogs loss should give Mounties fourth place.

It is going to be no easy task for Mounties to beat the Bears. In their last outing, the Bears beat the Panthers, 42-24, at North Sydney Oval - scoring seven tries, five in the first half. They've also had some recent wins over weaker teams, the Warriors (22-6) and Sea Eagles (28-24). However they have recorded losses to the Dragons (22-18) and Rabbitohs (31-24) in the past month.

Mounties won just once in the nine matches between Round 11 and Round 20, an 18-12 win over the Western Suburbs Magpies at Campbelltown Stadium. However, they broke a six game losing streak three weeks ago, and are now on a three game winning streak.

Mounties team changes: Raiders Under 20s star Harley Smith-Shields comes in on the wing for Andre Niko. Sam Williams and Brendan O'Hagan switch their official starting positions from last week, with Williams at half and O'Hagan at five eighth. Tom Startling will start at hooker in place of Siliva Havili, who has been promoted to the Raiders' bench. Jarrett Boland and Vincent Rennie have been added to an extended five man bench.

Our tip: This is a match that Mounties must win. If they don't, they'll finish outside the top four - and it is pretty difficult to be a genuine challenger from that position on the ladder. The Bears are not unbeatable - and hopefully, Mounties bring last Sunday's first half performance to the contest. If they do - and avoid the second half fade - they can get the win. I'll tip Mounties at home in this one.

Welcome to our coverage of today's NSW Cup clash between Canberra Raiders affiliate Mounties and the North Sydney Bears. This post will update with live scores from 3:00pm. Here are the final team line ups:

First set O’hagan kicks out on the full.
Top

Norths go up to score in left corner through Bernard Lewis. 4-0.
Top

Conversion misses by a suburb
Top

We march down field with a penalty and O’Hagan ordinary kick long. Why is Sam Williams not kicking!!
Top

Super flick pass from Oldfield to Santini to score. Wonderful contested catch by Oldy at the start of the set in windy conditions.

Great work from forwards on next set. Bateman, Collins, Guler and Murchie making metres but Williams kicks long with the wind.
Top

We have them under the pump defensively then Bateo gives away soft penalty on the 5th. Norths held up just short on resulting set. 6-4 18 mins gone.
Top

Long stoppage as Norths #10 Bailey is taken from the field. Won’t be back was the word from norths bench
Top

Lussick breaks through but then they throw a crazy pass and knock on. Poor defence
Top

Steal from Starling then we get a penalty. Williams fails to find touch with the wind behind.

I am not allowed to swear on here
Top

#14 Lussick hits through for #9 Dietz (playing halfback) who scores. Set on their line after Seb Kris knocks on.

Lam kicks this time and they convert.

If Mounties can't win this one... difficult to see them making any impression in the finals.

Ohagan is a myth. He obviously can do no wrong by someone. This is to hard to watch. Im out of here at half time if this is the best we have. Should have went to watch the 20’s instead.

Gee we have it all to do.

Sam Williams off with boots off. Not sure if injured or just hooked to be 18th man. Starling smashed just before half time but should be right.

Running into a very strong wind in the second half.

Really poor half from what should be a quality reserve grade side.
Top

Won't surprise if both Williams and Guler don't play in the second half, given they are on the extended bench for Cronulla.