16th min TRY WARRIORS to Tom Ale following a grubber kick through. It’s off the back of a penalty. Converted Sione Moala.

19th min TRY WARRIORS to Phillip Makatoa. Break right down the middle and the prop backs up. Scores under the posts. Converted Moala.

23rd min TRY WARRIORS to Jyris Glamuzina? They kick ahead down the wing, the Raiders let the ball bounce, the regather and tap the ball onto the try scorer. Moala converts from out wide. That’s four tries in four sets.

Is defence a thing in this game?
Gina Riley: Oh, come on, John. That’s a bit old hat, the corrupt IOC delegate.
John Clarke: Old hat? Gina, in the scientific world when they see that something is happening again and again and again, repeatedly, they don’t call it old hat. They call it a pattern.
Top

Losing the ruck badly. The early tries down the left edge from lazy inside front rower

38th min Raiders run on the last and Harley Smith Shields is held up over the line. Unlucky!
The Greenhouse score update service
Top

40th min TRY RAIDERS to Joe Roberts! Not held up this time! No conversion Westcott from out wide.

48th min Warriors running rampant again. TRY WARRIORS to Tom Ale, his second. Defence has gone missing today, after being a feature of the Raiders recent performances. Moala converts from in front.

Knowing under 20s... this could turn out a 40 all draw!
The Greenhouse score update service
Top

Another week of mediocre refereeing. Warriors offside 70% of the second half. I dont know how coaches put up with it

The Canberra Raiders have fallen short of a miracle comeback as they went down to the Warriors 40-34 at GIO Stadium. The Warriors had a 40-16 lead early in the second half before the Raiders seized momentum of the match to get within six points of their opponent. 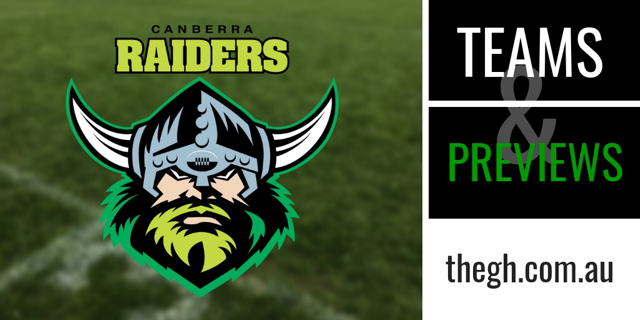 PREVIEW: The Canberra Raiders suffered a 40-34 loss to the New Zealand Warriors at Canberra Stadium in Round 6 - dropping out of the top eight as a result. The Warriors had just one win to their name, but were dominant for much of the match. The Raiders started well, with tries to second rower Jordan Martin and centre Harley Smith Shields giving the home team a 12-0 lead after 11 minutes. But from the 15th minute, the Warriors unleashed. They scored four tries in the space of four sets. If they weren't making huge breaks down the middle of the park, they were kicking them down the sideline - with everything they did turning to gold. By halftime, the Warriors had piled on five tries, giving them a 28-12 lead.

The Raiders came back to life in the early stages of the second half, scoring through Joe Roberts after five minutes. However, the New Zealand outfit went on another attacking blitz, scoring a brace of tries in the space of two minutes - to winger Harley Maynard and second rower Tom Ale.

Canberra staged a comeback in the final quarter hour. First Harley Smith Shields went over for his second try of the afternoon, before lock Darby Medlyn crossed out wide with nine minutes remaining. And when winger Daine Spencer scored with six minutes left on the clock, it looked like Canberra might even force an unlikely 40 all draw. However, Toby Westcott's conversion was the end of the scoring, with the Raiders falling short by six.

In team changes for the Raiders, Jarrett Subloo is back at five eighth after missing the Warriors match, with Toby Westcott moving to his regular No. 7 jersey, and Kyle Patterson back to his regular dummy half role. Liam Mock drops back from the No. 9 to the bench. Duwanye Mariner is named at starting prop, with Silifano Titiuti dropping back to the bench. For some reason, the big men usually switch roles late, with Titiuti starting. After being included in the top 17 last week, Joe Roberts is 18th man.

Our tip: If the Raiders play to their potential, they should be too strong.

The Canberra Raiders’ Jersey Flegg team will be looking to bounce back this weekend as they face the Sea Eagles at HE Laybutt Field on Sunday afternoon.

"He's a player that plays with a lot of energy," coach Ash Barnes says of last week's debutant winger Daine Spencer. "Particularly at the back end of the second half, he caused the Warriors a bit of trouble and gave our side a bit of energy".

I am sure the original fixture had this game being played at Brookvale and Mounties at Blacktown.

Personally, if we only get one of them I would rather have Mounties as the curtain raiser.
Top

Personally, if we only get one of them I would rather have Mounties as the curtain raiser.

It did, and listed that way up until teams were announced.

Welcome to our coverage of today’s Jersey Flegg clash between the Canberra Raiders and Manly Sea Eagles at Blacktown. This post will update when can with live scores from 3pm! So refresh for the latest. This game is broadcast via on line radio: http://www.swr999.com.au/sport

PREVIEW: The Canberra Raiders produced a huge 56-4 victory over the Manly Sea Eagles in Round 7 at Blacktown's HE Laybutt Field. Canberra scored six tries in the first half, including a double to hooker Kyle Patterson in the space of three minutes - and led 32-4 at the break. They continued on their merry way in the second half, with centre Matthew Timoko and winger Harley Smith Shields both picking up their second tries of the afternoon. In the end it was 10 tries for the Green Machine in a comprehensive performance. The result saw the Raiders climb back into the top eight.

It will no doubt be a much tougher contest for the sixth placed Canberra when they travel to Wagga Wagga for a clash with the first placed Penrith Panthers. The Panthers have lost just once this season - to the Dragons, 22-20 in Round 3 - and are on a four game winning streak. They have run up cricket scores in their past three games - against the Thunderbolts (72-4), Sharks (50-10) and Rabbitohs (42-0). The Raiders have a WLWLW record in their past five games.

The Panthers are the benchmark in the Jersey Flegg competition in both attack and defence. They have averaged 38 points scored per match so far this season, compared with 30 for the Raiders (ranked second in attack in the competition). Penrith has conceded just 11 points per match, compared with the Raiders' 19.

Raiders team changes: Charlie Rorke moves back into the starting line up, partnering Silafano Titiuti at prop, with Tom Robertson dropping back to the bench. Darby Medlyn moves into the second row, alongside Kai O'Donnell, with Duwanye Mariner taking over from Medlyn at lock. Jesse Dent maintains his place on the bench, after being a late inclusion last week.

Our tip: We'd love to tip the Raiders in this one... but the Panthers are in raging hot form. It could be a tough afternoon for the Green Machine.

The Canberra Raiders’ Jersey Flegg team will head into the weekend full of confidence when they come up against league leaders Penrith Panthers at McDonalds Park this Saturday. Jarret Subloo returned to the starting line-up last week after a quad injury.

"We were able to be quite a threat across the field," coach Ash Barnes said. "Going forward, those combinations between Subloo, Wescott and Kyle Paterson will continue to build… it’s really pleasing."

A surprise visit from the Canberra Raiders under-20s has helped boost the launch of the Disability Trust's new rugby league program Score Raiders. The program provides people with disabilities an opportunity to participate in a weekly training session where they can showcase and learn the skills of rugby league.

A surprise visit from the Canberra Raiders under-20s has helped boost the launch of the Disability Trust's new rugby league program Score Raiders. The program provides people with disabilities an opportunity to participate in a weekly training session where they can showcase and learn the skills of rugby league.

Welcome to our coverage of today's Jersey Flegg match between the Canberra Raiders and Penrith Panthers. This post will update with live scores, so refresh for the latest. Here are the final team line ups:

32nd min TRY PANTHERS to Stephen Crichton and he gets a double. The conversion from Hands sees the Panthers trail by four.