Canberra Raiders Cup Grand Final team lists are IN! Check out the line ups for the Queanbeyan Blues and Goulburn Bulldogs: http://ow.ly/92ue50vYI14

Should be a really good days football on Sunday.

Some very old stagers in the Qbn team with Campese, Monaghan and McLean.

I would have thought Goulburn would win.

Of course Qbn Blues have won 23 titles but they do get the advantage of having the GF at their home ground every year.
Top

You'd be forgiven for thinking a 19-year-old would struggle to keep a seasoned veteran out of the Queanbeyan Blues first grade side. But that's exactly what's happened.

"It was a shock to get the call-up, I was told to just play my own game and I'd be fine," said Parsons.

The Goulburn Bulldogs five-eighth, Mitch Cornish, who little more than a week prior had claimed the Les McIntyre Medal as the competition's player of the year, was forced to miss the biggest game of the season. And at the end of the day, the Queanbeyan Blues ran out 34-14 winners in the 2019 Canberra Raiders Cup Grand Final. 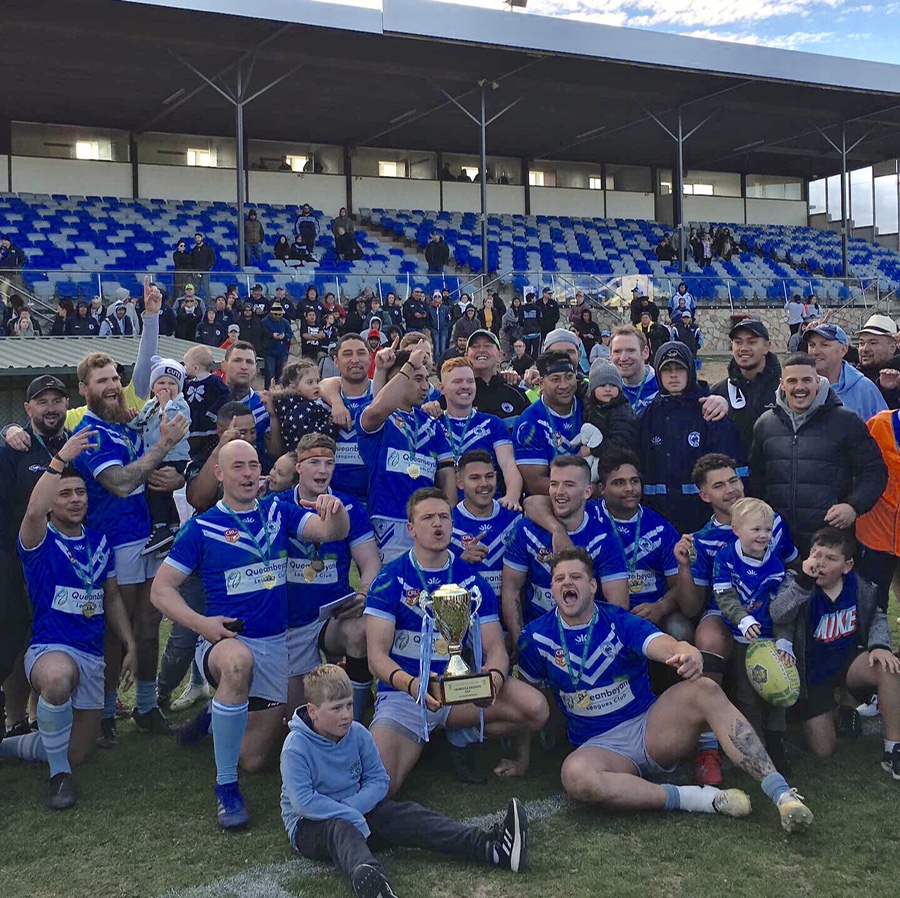 The Queanbeyan Blues are the 2019 Canberra Raiders Cup premiers, after they defeated the Goulburn Bulldogs 34-14 on Sunday at Seiffert Oval.

The Bulldogs were rocked by the loss of McIntyre Medalist, Mitch Cornish - Goulburn's key playmaker - to injury after the Preliminary Final. He had throat surgery during the week.

The Bulldogs did their best to keep Cornish's injury under wraps, naming him in their team - and he even suited up in his player's kit for the warm up. But he was merely a spectator as his team mates went through their paces. Tyler Cornish shifted from fullback to five eighth to cover his brother's injury, while centre Chris Hart took over at the back.

"It's just a big sigh of relief because Goulburn have been red hot. Unfortunately Mitch Cornish couldn't play, it would have been a different game if he could, but that's footy," Campese told The Canberra Times after the game.

The Blues were the first to score, when hooker Zac Patch darted out of dummy half, crossing under the posts in the seventh minute.

The Bulldogs hit back at the 20 minute mark, when Tyler Cornish made a smart break up the middle, throwing a great flick pass to his brother Nick for four points. Seven minutes later, Goulburn went to a 10-6 lead, after the Bulldogs took advantage of a lost ball in the red zone - and winger Steve Cummins went over in the corner.

However a try to Blues forward Josh Hitchins and then a penalty goal to Campese right on half time saw the Queanbeyan outfit go to the break with a 14-10 lead.

Five minutes into the second half, Goulburn second rower Izzy Tittor surged to the line, and reached and planted the ball - allowing the Bulldogs to draw level, at 14 apiece. But that was the end of the scoring for Goulburn. Tries to Josh Stuckey and captain Jake Wheeler gave the Blues a 10 point lead. Wheeler’s try was special, receiving a short line drop out and running down the middle for a fine individual try.

In the 65th minute, Queanbeyan's Jack Williams made a big run down the grandstand sideline, kicking back inside for his fullback Matt Parsons. It was the perfect kick, and a spectacular try for Parsons under the posts.

It was an unfortunate end to the season for the Bulldogs, who came into the match as the No. 1 attacking and defensive team in the competition. But the loss of Mitch Cornish proved to be too high a hurdle. The Bulldogs did not win a game in the three grades in which they were represented. However, the fact the club had such strong representation on Grand day bodes well for the future. Coach Adam Kyle and the Bulldogs have done a great job in rebuilding the club. 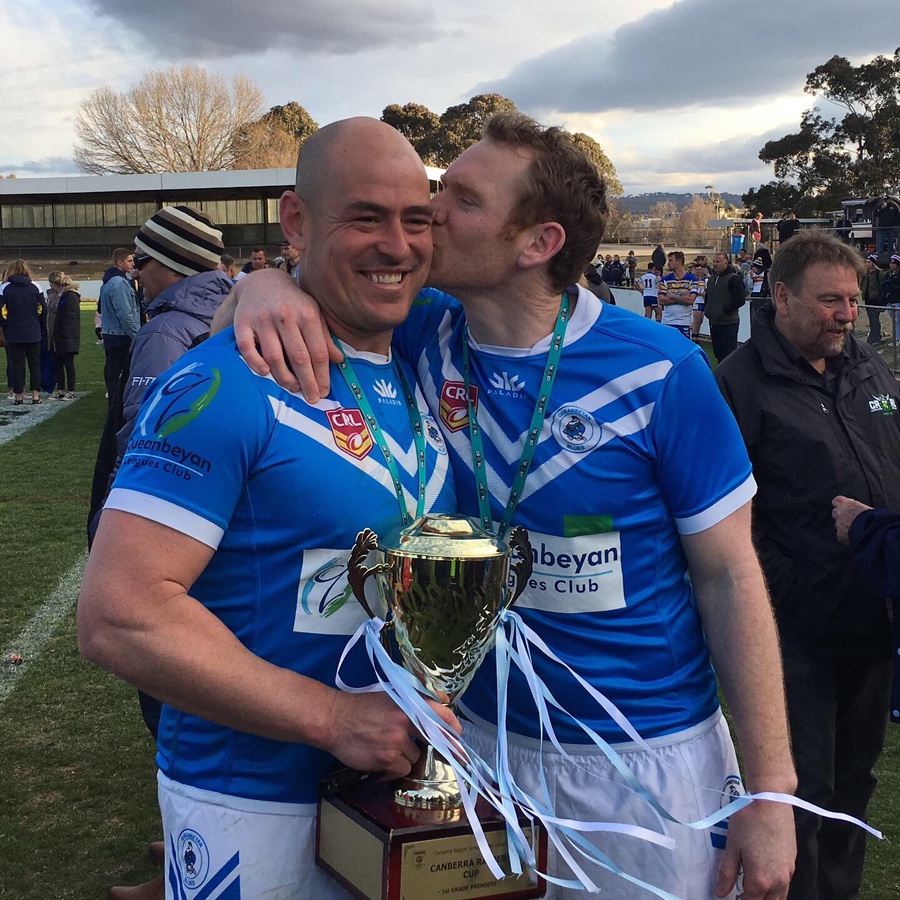 The Blues have now won their 25th title, and continue to be, far and away, the most successful team in the Canberra Raiders Cup. Former Raiders team mates and veterans Terry Campese and Joel Monaghan shared a special moment after the game. It remains to be seen how long they will play. But it seems like Campese, in particular, could play on forever. It will be a sad day when he does finally hang up the boots.

And that's the end of the Canberra Raiders Cup season. I've really enjoyed bringing you our coverage of the competition. I actually feel a bit sad tonight, that the season is over. I hope people enjoy the coverage... if you do, let us know!

Grass roots rugby league deserves our support. It is run by people all over the district who love rugby league and give their time and all their effort to our sport.

If you are one who yearns for the "suburban grounds"... we have them right here in our backyard. If you've never been to a game of the Canberra Raiders Cup, make sure you get out to a game next year.

Watch the highlights from the 2019 Canberra Raiders Cup Grand Final won the Blues. Plus post match reactions and our wrap of the game: http://ow.ly/BjmL50w26le

Thanks for the updates GE!
Top

Josh Stuckey has signed with the Northern Pride for 2020.
Top

He’s a good player. Sorry he’s been lost to our competition. He’d be a good one for a Canberra team in NSW Cup.

GE, I agree with you that it is worth getting out to a local ground and watching this comp, there is a great standard of footy on displaay.
Top

While Josh Papalii has been tearing it up for the Kangaroos, his sister Crystal has been named in the Monaro women's squad for the 2020 country championships.

Having collected all the votes from the McIntyre Medal tally, here is the 2019 Blumers Lawyers Canberra Raiders Cup Team of the Year.

Team of the Year