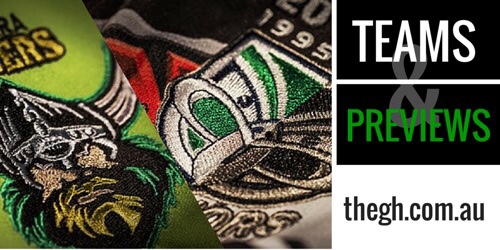 Paul Roache moves from the halves to fullback, with Erin Clark moving from hooker to halfback. Clark has been named captain.

Fabien Paletua-Kiri will start at prop. Jacob Field, Derek Hay and Kye Madden have been included in the starting side. Hudson Young, Lachlan Cooper and Zac Masters will start on the bench.

The Canberra Raiders' Holden Cup finals hopes have just about been extinguished after falling to the first placed Cronulla Sharks in Round 22. The Raiders are now six competition points away from the eighth placed Brisbane Broncos - and have been left languishing in 12th place on the ladder.

Last weekend: Canberra was never really in the contest with a Cronulla side that has only lost twice this season. The Sharks scored four tries and led 20-0 inside the first 20 minutes of the match. Second rower Briton Nikora scored a hat trick tries - in the second, eighth and 18th minute.

The Raiders fought gallantly, with hooker Erin Clark going over from dummy half in the 22nd minute. But the Sharks kept on scoring. In the 25th minute, Cronulla fullback William Kennedy and five-eighth Luke Metcalf combined for a long range try. And five minutes later, Briton's second row partner, Tony Matautia went over for his second, producing a 30-6 lead for the home team.

With less than a minute to the half time break, the Raiders' own boom second rower, Jack Murchie, produced an impressive try, after half Paul Roache delivered a good short pass. The teams went to the sheds with Canberra trailing 30-10.

It was more of the same in the second half. The Sharks were never troubled, but Canberra kept on fighting back. Cronulla was first to score through William Kennedy. But Murchie responded with his second four pointer of the night in the 50th minute - after a good bumping run to the try line.

The Sharks ran rings around the defenders in the lead up to Kyle Flanagan's try just five minutes later - giving Cronulla an imposing 42-16 lead. But the Raiders again responded. A short kick off was regathered by a flying Jarred Tuite - and Canberra was rewarded with a try to Fabien Paletua-Kiri under the posts in the 60th minute. The try reduced the gap to 42-22, but that was the end of the scoring for Canberra. The Sharks went on to win 58-22, with both Nikora and Metcalf getting hat tricks for the home team.

This week's contest: The Raiders travel to Auckland to face the New Zealand Warriors at Mt Smart Stadium this Sunday. The Warriors are placed last in the competition - and have won just three times in 2017. Their 3-17 record compares with the Raiders' 8 and 12. The Warriors are on a five game losing streak - and in their past three matches, both the Cowboys and the Knights have posted 70 points against them. Their last start against Newcastle was a 70-4 defeat. The Raiders have a WWLLL form line in their past five matches.

Team changes: Coach Brett White has shaken up his team line up, with five eighth Paul Roache replacing Harry Van Dartel at fullback. Van Dartel drops to an extended reserves list. Former Warrior, Erin Clark moves from hooker to half and has been named as captain. Half Lachlan Cooper drops to the interchange bench, while Jarred Tuite is included at hooker. Derek Hay replaces Roach at five eighth.

In the forwards, Fabien Paletua-Kiri will start at prop, with Sione Afemui dropping to the reserves list. Daniel Keir and Jacob Field will form a new second row partnership - with Jack Murchie promoted to Mounties and Hudson Young dropping to the bench. Kye Madden replaces Zac Masters at lock, with Masters retaining a place in the top 17 on the bench.

For the Warriors, Paul Turner has been named to partner Chanel Harris-Tavita in the halves, with Kane Telea in the centres. Captain Chris Sio has been named at prop. Eiden Ackland will start at hooker and Jerome Mamea in the second row.

Opposition to watch: Chanel Harris-Tavita has been the most dangerous this season for the Warriors, with 10 try assists, 12 offloads, seven line breaks and six tries. Centre Kane Telea is the player in this line up who has scored most tries (eight), while his centre partner Melino Fineanganofo tops the tackle breaks (five per match). Those figures are, however, consistent with a team that has struggled in attack.

In the forwards, Christopher Sio is the regular player who puts in most work in defence, averaging 34 tackles per match. He's backed up by Joe Vuna (26 tackles per match) and Tyler Slade (25). Sio also averages just over 100 metres per match with the ball in hand.

Our tip: When these two teams last met - in Round 7 at Canberra Stadium - the Raiders were narrow 18-16 winners. Both teams have lost in their past three matches, but the Warriors' recent form has been much poorer than the Raiders. Canberra has made a significant number of changes to the line up and it is difficult to know how the team will "gel". The Raiders' poor away record is also a reason for concern. But new captain Erin Clark will be very keen to play well against his former team - after making a mid season switch to Canberra. We'll go with the Green Machine in this one... by a fair margin.

The Canberra Raiders' Holden Cup finals hopes have just about been extinguished after falling to the first placed Cronulla Sharks in Round 22. The Raiders are now six competition points away from the eighth placed Brisbane Broncos - and have been left languishing in 12th place on the ladder.

Had to do a double take here, forgot which thread this was and thought we were talking about NRL Raiders and was very confused

Interesting that Roache has moved to fullback now the season is done. I wonder if that's a long term move.
Top

edwahu wrote:Interesting that Roache has moved to fullback now the season is done. I wonder if that's a long term move.

his brother made an ok fist of wing last week

Sent from my SM-G950F using Tapatalk
Edrick The Entertainer
Top

Brett White's troops head across the ditch with a number of positional changes after last week's loss to the ladder leaders the Cronulla Sharks. They face a young Warriors side who sit at the foot of the NYC ladder.

The match certainly has a Kiwi flavour to it with a number of the Raiders youngsters hailing from New Zealand.

Welcome to our coverage of today's Holden Cup clash between the Canberra Raiders and New Zealand Warriors. It's a warm day for winter in New Zealand, fine at present, but forecast rain for game time in the NRL match. Holden Cup will kick off at 11.45am Auckland time, 9.45am Canberra time. We'll have live scores here.

No team list supplied. But Harry Van Dartel has come in on wing.
Top

We are underway here at Mt Smart Stadium.
Top

20th min Warriors have a player binned after multiple penalties in the red zone. And they should have had another in the bin... after another penalty.

The Raiders knock on... the Warriors survive.
Top

That was no knock on, replay showed the Warrior punching it out

28th min Warriors receive a penalty and they're going for the two points. Canberra has not looked like scoring against 12 men.

36th min TRY RAIDERS to Sebastian Kris, his second, Great break from the kick off from Afemui for the Raiders. Andre Niko can't convert.

That Afemui is charging on to the ball, top stuff

44th min TRY RAIDERS to Mikaele Ravalawa, Niko jumps for the kick to the try line and offloads to the winger inside. Niko converts.

56th min TRY RAIDERS to Hudson Young, good run and he charges through, under the posts. Converted Niko.

Lol what was that by Young? That was beyond BJ levels of dumb.
Top

60th min Certain try bombed by Canberra forward Hudson Young. The defender must have called for it... and he attempts to pass inside... instead of to Niko in support on the outside.
Top

62nd min TRY RAIDERS to Harry Van Dartel, great run from the stand in winger. Niko on the sideline... misses the goal.

71st min TRY RAIDERS Derek Hay under the posts, some great running and passing up the middle. Niko converts.

The Raiders NYC side have recorded a 36-14 win over the Warriors NYC side in Auckland this morning.

The home side enjoyed the bulk of possession in the early stages of the match as they opened the scoring when Dylan Tavita showed great strength to stretch his arm out over the try line and give the young New Zealand side a 6-0 lead.