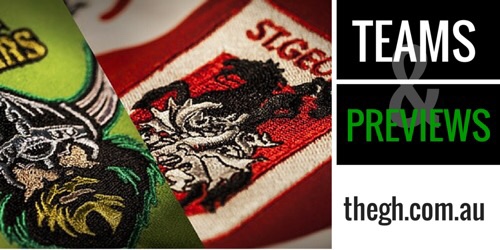 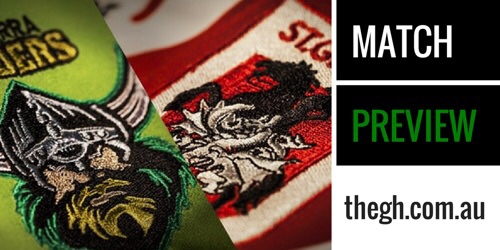 The Holden Cup Canberra Raiders recorded a strong, 36-14, win over top four outfit, the North Queensland Cowboys in Round 17 at Canberra Stadium.

The Cowboys were first to score, but tries to Kalani Going and Daniel Kier in the space of two minutes, gave the Raiders a 12-4 lead at the 16th minute. The young Raiders just grew stronger as the match progressed. In the 23rd minute, Zac Masters simply charged over the line through the middle of the ruck. And then with two minutes to half time, Jack Murchie made a great break and passed inside to Harry Van Dartel, who made a diagonal run to try line to avoid the Cowboys' defence. It gave the home team a 24-4 lead at the interval.

It was heavier going in the second half - and despite the attacking threat of the Cowboys' Kayln Ponga, the Raiders' defence held. A try to new recruit Erin Clark in the 64th minute saw the Raiders extend their lead. Two Cowboys tries in the space of three minutes - to Jake Clifford and Ponga - were cause for concern, reducing the gap to 30-14 with 11 minutes remaining. But Canberra's defence repelled the dangerous Cowboys attack for the rest of the match - and a try to winger Komiti Tuilagi four minutes from full time sealed it for the Green Machine. Erin Clark was named man of the match.

The Raiders face another big challenge this Friday night when they meet the second placed St George Illawarra Dragons. The Dragons have a 12-4 record in 2017, compared with 7-9 for the Raiders.

The Dragons were defeated narrowly by the Gold Coast Titans, 26-24, in their last start - breaking a four game winning streak. The Titans led 20-6 at half time, but the Dragons mounted a second half comeback, with Zac Lomax recording a double. They have recently recorded two point wins over the Bulldogs and the Eels, along with a big victory over the Wests Tigers. The Raiders, in contrast, are on a WLLLW form line.

The Dragons average 28 points (4.9 tries) scored per match, compared with 25 points (4.5 tries) per match for the Raiders. The Dragons rank seventh in the competition in defence, conceding 4.8 tries per match. Canberra rank in the bottom four in defence, conceding just over five tries per match. Those statistics are not too different really and are slightly at odds with the Dragons' position on the ladder. However, the Dragons have won four matches by two points and six by six points or less so far this season. The Raiders have a good record at home (6-2), but the Dragons perform as well on the road (6-2) as at home.

The Raiders have made minimal changes to their squad for this match. Canberra Raiders forward, Zac Masters moves from lock to starting prop, swapping with Daniel Keir. Kye Madden comes into the top 17 on the bench, with Sato Keita-Opo dropping out of the squad.

For the Dragons, rep stars Jai Field and Reuben Garrick are named in the back line, but another, Zac Lomax, is out. Field has played just one match in this grade all season. Stuart Mason moves to prop, with TJ Uele going back to the bench. Trent Peoples comes into the second row for Mason. Josh Dowel comes into the top 17 on the bench.

Our tip: The Dragons have some hightly rated representative players in their ranks - the likes of Jai Field and Reuben Garrick. And there's no doubt the Raiders will need to closely mark the Dragons' halves Tristin Sailor (12 tries, 11 try assists) and Jackson Willis (eight tries, 15 try assists). For those wondering... Tristin Sailor is Wendell Sailor's son.

But this Raiders team also has a fair share of representative players - like Jack Murchie, Emre Guler and Sebastian Kris. Kalani Going would have represented the Kiwis this year, alongside Fabien Paletua-Kiri, but for injury. The addition of Paul Roache and Erin Clark in play making roles has also made a big difference for the Raiders in recent weeks.

It should be a great contest. It's hard to go past the Dragons, but I said that last week when assessing the Cowboys' team as well. Don't be surprised if the Raiders prove too good on the day.

The Canberra Raiders NYC side will aim to remain in close contention with the top eight when it hosts the high-flying St George Illawarra Dragons at GIO Stadium on Friday evening.

The 11th-placed Raiders got their season back on track through a 36-14 belting of the Cowboys last time they played, and will look to replicate the red-hot form displayed in Round 17 when they meet the second-placed Dragons.

Welcome to our coverage of this evening's Holden Cup clash between the Canberra Raiders and St George Illawarra Dragons. Kick off is at 5:35 so join us then for live scores. The final Raiders line up will be available after 4:35pm:

We've had some light rain pass through Canberra, but that's just about cleared. Forecast for game time in the NRL is 7C with a 40-60 per cent chance of showers.
Top

Haha this bloke popped up in a rep cricket team of mine 2/3 years ago and I watched his one and only over from first slip go for 20 odd off at least 12 deliveries. Glad to see he's a footballer haha
well, I guess you could say that I'm buy curious.
Top

Sent from my SM-G950F using Tapatalk
Edrick The Entertainer
Top

We are underway at Canberra Stadium!
Top

16th min TRY DRAGONS to prop Stuart Mason. He was held in goal, standing for an age, but grounded it when he fell to the turf. Jackson Willis converts from close to the posts.

The Greenhouse wrote:16th min TRY DRAGONS to prop Stuart Mason. He was held in goal, standing for an age, but grounded it when he fell to the turf. Jackson Willis converts from close to the posts.

26th min Raiders force a line drop out. The match is a bit of a struggle. The Drogons have put good pressure on through high kicks, but Canberra has had fairly good defence.

Canberra fails to take their chance, dropping the ball in the ruck.
Top

29th min Raiders knock on in their own red zone. But now the Dragons knock on at dummy half.
Top

31st min Another Raiders error in their own red zone, rucking it out. And now a repeat set for the Dragons through a penalty... No they choose to go for goal.

35th min A lot of dropped ball here, damp field. Dragons knock on in the ruck 30m out.
Top

38th min TRY RAIDERS to Fabian Paletua Kiri. He just strolls over under the posts from close range. Not much defence there. Andre Niko converts.

42nd min Back underway for the second half... and the Raiders come up with another error in the ruck 40m out.
Top

47th min TRY RAIDERS to Wesley Tameifuna in the corner. He was well covered by about three Dragons players but he just fended his way to the try line. Andre Niko fails to convert from the sideline.

50th min Raiders knock on right after the kick off.
Top

53rd min Dragons nearly go in after making a break down the sideline... but knock on. Raiders scrum on their own 10m line.
Top

57th min Raiders run it on the last and die with the ball 10m out. Raiders still lead by two. Now a stray pass from the Dragons gives Canberra a scrum feed 40m out.
Top

59th min Error from Canberra in the ruck, 1m out. Hopefully this is not a sign of things to come in firsts.

Van Dartel covers up an early kick downfield from the Dragons, but now Canberra is forced in touch on an early tackle 40m out.
Top

68th min TRY RAIDERS to Wesley Tameifuna. Powerhouse run to the corner, three player overlap for Canberra. Niko on the sideline... no goal.

Now Dragons recover from a short kick off.
Top

70th min Great defence Canberra! They take over the sideline 1m out!

73rd min Tristan Sailor knocks on... and it's followed by an error from Canberra. And now there's a dust up!
Top

76th min TRY DRAGONS to Rueben Garrick. No conversion. Raiders had produced some good defence, but the Dragons are trying everything.

78th min Raiders defend the set! They lead by six. And now they knock on, 10m out from the line!
Top

80th min Canberra hold them out!

Paul Roache is man of the match! Great effort to knock over the second placed Dragons!
Top

A double to winger Wesley Tameifuna has catapulted the Canberra Raiders U20s to a come-from-behind 18-12 victory over the high-flying St George Illawarra Dragons in the NYC at GIO Stadium on Saturday night.

The first of the Tongan’s pair of four-pointers handed the Raiders the lead for the first time in the game six minutes into the second stanza when he bustled over on the left edge as Canberra pocketed a 10-8 lead.

Seems as though the injection of Clark and Roach is huge for this team
well, I guess you could say that I'm buy curious.
Top

20's lads have been gallant all year. Defence is quite good for NYC standards. Just struggle to score points.
Top
Post Reply
37 posts