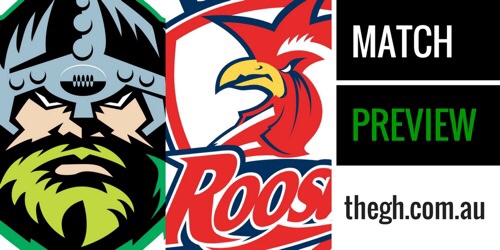 The Holden Cup Canberra Raiders suffered a heart breaking 23-22 loss to the Parramatta Eels on Saturday night. The Raiders led for almost the entire match, but a field goal to Eels half Troy Dargan in the 78th minute finally proved the difference.

It was a much improved performance from Canberra, after the big loss to the Newcastle Knights in the previous round. Tries to Jack Murchie, Sebastian Kris and Logan Spaander in the first half gave the Raiders a 16-8 advantage at the break. And in the 54th minute a try to Harry Van Dartel - following a kick ahead from Jayden Carroll and a fumble from the Eels' fullback - saw the Green Machine take a 22-12 lead.

But the Eels struck back with a try of their own - and in the 62nd minute Jack Murchie was harshly sin binned, giving Parramatta the opportunity to set themselves up for the win. It looked like Murchie would score a length of the field try, after he intercepted a Parramatta pass on the Raiders' own goal line. But Murchie was judged off side - and was unusually judged to have committed a professional foul to boot.

The loss leaves the Raiders in 11th place on the competition ladder. However, they are not far off the top eight. There are five teams equal on 10 competition points, one being the eighth placed Sydney Roosters. And they're the Raiders' opponents this week.

The Roosters recorded a big 44-14 win over the Bulldogs last weekend, bouncing back from their own heart-breaking, two point, loss to the Eels in Round 10.

Both teams have lost players to the Under 20s State of Origin squads. Raiders forwards Jack Murchie and Emre Guler have been picked for New South Wales. It follows their recent selection for the Junior Kangaroos' Test against the Kiwis. Both have been in fine form and will be missed from the Canberra forward pack. Guler made 148 metres from 13 runs, three tackle breaks and 24 tackles last Saturday night, while Murchie made 98 metres from 9 runs, 26 tackles and scored a try.

The Roosters are without backrower Nat Butcher and utility Victor Radley, both selected for the Blues - as well as winger Bernard Lewis, selected for Queensland. The Roosters have named Butcher and Radley in their first grade squad on their reserves list. Lewis has been injured, and was named by the Roosters on the extended NYC bench in a hope he'd be fit for this match. Presumably all that will be trumped by the representative fixture. Last week Butcher made 218 metres from 13 runs, three line breaks, nine tackle breaks and scored a try. Radley made 180 metres from 16 runs, four tackle breaks and 18 tackles. So that also leaves a fair hole for the Roosters too.

In changes for the Raiders, Matthew Scott starts at prop in place of Guler, while Jacob Field comes in for Murchie. For the Roosters, Kiah Cooper replaces Adam Pompey at fullback and Lyndon Hills takes Cooper's place in the centres. Jarrett Boland and Josh Curran come into the second row.

Our tip: The last time these NYC teams met, the Roosters won 48-0 in the first week of the 2016 finals. But this is 2017. The Roosters look slightly stronger statistically and on recent form, but it's a difficult one to pick, given the disruptions caused by Origin. We'll stick with the home team in a close one.

The Canberra Raiders will be out to snap a two-game losing streak with a new-look side when they host the Sydney Roosters at GIO Stadium on Sunday afternoon.

Brett White’s men will be without front-rower Emre Guler and second-rower Jack Murchie as they look to bounce back from a heartbreaking 23-22 loss to the Eels on Saturday evening.

Welcome to our coverage of today's Holden Cup clash between the Canberra Raiders and Sydney Roosters. Some threatening clouds about and strong breezes. Temperature is presently 13C. We are yet to see a final Canberra Raiders line up.

We will have live scores right here from 1:45pm.
Top

Logan Spaander is out, Lachlan Cooper comes into the halves and Sam Finnegan comes onto the bench.
Top

We are underway in the Holden Cup, Roosters have the first set. I can tell you the wind is icy, it's like the wind we have in Canberra when it's snowing in the mountains. Sleet reportedly seen at Canberra Stadium earlier.
Top

15th min It's still 0-0 at Canberra Stadium, the Roosters have had the best of territory and possession... and have been held up once. But neither side has really looked like scoring. Quite a few forward passes called up.
Top

17th min TRY RAIDERS to Fabien Paletua-Kiri. He charges over from close range after Andre Niko was held up over the line earlier in the set. Niko does not convert.

23rd min TRY ROOSTERS to winger Kenneth Koro. They run it and throw it wide on the last tackle and find an overlap. Converted by half Sean O'Sullivan from close to the posts.

29th min Raiders really committing too many errors, forward passes and fumbles in the ruck. Perhaps the passing is impacted by the strong wind.
Top

31st min TRY ROOSTERS to prop Luke Chalker. He just charged over the line from 1m out... it looked like he might be held up but he gets there in the end. Converted O'Sullivan.

35th min Roosters nearly go over again, in the corner, but drop it over the line.
Top

37th min TRY ROOSTERS to five eighth Lachlan Lamb. He attacked the line with speed from 20m out... and it looked like the defence might stop him short, but he reached out and planted it on the line. Converted O'Sullivan.

49th min Tuite burrows towards the try line on the last tackle, but he's short.
Top

58th min Raiders make a charge down the left side through Kris, but it all comes unstuck 1m out.

65th min TRY RAIDERS to Sebastian Kris. They finally convert an opportunity. And it's an extra two points to Andre Niko.

70th min Raiders held up over the line. Now they get six again!

TRY RAIDERS to Sam Finnegan. Here they come! But the conversion is missed!

72nd min TRY RAIDERS to Harry Van Dartel, the break comes from near half way and he's there to back up! Under the posts. Andre Niko converts.

75th min TRY RAIDERS they follow the kick through on the last and it's planted by Niko! Andre Niko converts.

Roosters coach must have just had a stroke

77th min Raiders force a line drop out, force the Roosters back in goal.
Top

78th min TRY RAIDERS to Jarred Tuite! He runs on the last and just reaches out and scores! This is INCREDIBLE! Andre Niko converts.

Jarred Tuite is man of the match.
Top

WOW. What an effort!

The Canberra Raiders NYC team have produced a stunning second half comeback to defeat the Sydney Roosters 32 points to 24 in Canberra this afternoon.

The Raiders came into the match having suffered a close one point loss to Parramatta last week as forward Emre Guler and Second Row Jack Murchie were absent due to Origin call ups.

The Roosters were coming off a strong thirty-point win over Canterbury last week, as both teams had five wins each coming into the match, with Sydney sitting in 8th on the ladder and the Raiders in 11th.

Just proves that Tuite should be playing on Wednesday night for QLD U20. Hopefully his good form continues and is rewarded with a second tier contract.
Top
Post Reply
28 posts • Page 1 of 1