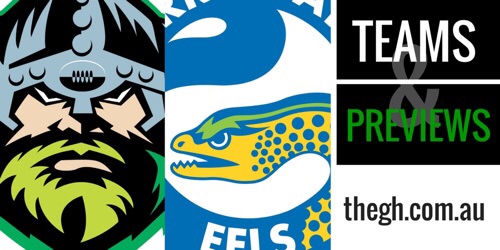 The Holden Cup Canberra Raiders had a tough afternoon on Sunday, defeated 32-6 by the Newcastle Knights at the Newcastle Sports Centre. The Knights led by 8-0, before a Raiders try to Jack Murchie - off the back of a Logan Spaander grubber - set up a 8-6 scoreline at the half time break. It looked like the Raiders had forced their way back into the match, but it was all one way traffic for the Knights in the second half.

The Raiders are enduring a mixed start to season 2017 - and with a 5-5 record, they in 11th place on the competition ladder. However, they are not far off the top eight, with Canberra one of three teams on the same competition points as the fourth placed Manly Sea Eagles.

The Raiders' opponents this week, the Parramatta Eels, are in fourth place, with just one more win to their name this season. The Eels were last start winners over the Roosters, 30-28. They only claimed the match in the final stages when captain Denzal Tonise barged over near the posts to level the scores - with Troy Dargan converting for the match-winner. The Raiders will need to watch for winger Greg Leleisiuao who scored two tries and ran for 265 metres on Sunday.

There have been a number of changes in the Raiders' line up for the upcoming match. Jayden Carroll will start in the halves alongside Logan Spaander, while Lachlan Cooper has been named on the bench. In the forwards, junior Kiwis representative Fabien Paletua-Kiri will start the match at prop, with Zac Masters moving to lock. Raiders captain Jarred Tuite shifts from lock to hooker.

It will be tough for Canberra to take the competition points, but they have been known to produce an unexpected result.

Our tip: Given the form of the two teams, however, we have to predict an Eels win.

The Canberra Raiders U20s will be hunting a return to the winners’ circle when they cross swords with the Parramatta Eels at ANZ Stadium on Saturday evening.

Brett White’s brigade will have to make amends for a 32-6 loss to the Knights if it is to notch a win on Saturday, but a win will be pivotal for the team's finals aspirations.

Welcome to our coverage of today's Holden Cup clash between the Canberra Raiders and Parramatta Eels. The weather is fine, despite forecasts of rain. No updated team list yet available. Kick off is at 5:15pm.
Top

12th min TRY EELS to winger John Fonua. Canberra did well to stop a try in the opposite corner a couple of minutes earlier, but couldn't control possession. No conversion from the sideline.

16th min TRY RAIDERS to Sebastian Kris, the bomb to the try line is batted back and he picks it up and scores unchallenged. He can't convert his own try.

22nd min TRY RAIDERS to Logan Spaander chasing a Jayden Carroll kick. He just grounds it before it goes dead. Andre Niko converts from in front.

Eels kick off in the second half.
Top

42nd min TRY EELS to winger Greg Leleisiuao. Canberra allowing too many off loads, but it's some very good passing from the Eels. They look more dangerous in attack. No conversion.

54th min TRY RAIDERS to Harry Van Dartel, he follows a kick ahead, the Eels fumble and he takes advantage. Andre Niko converts from almost in front.

62nd min Jack Murchie sent to the bin, ruled off side taking an intercept on the try line. He was away too.
Top

74th min Eels winger Fonua knocks on on the last tackle, with the line open.

75th min Spaander makes a break, gets the pass to Murchie but he's tackled. Raiders can't through on the last.

Now Niko takes the Eels over the sideline near half way.
Top

78th min Raiders in position to take a field goal, but don't. Spaander kicks it straight to an Eels defender.

FIELD GOAL EELS Troy Dargan. They set it up perfectly.

The Raiders have fallen to an agonizing one point loss to the Eels at ANZ Stadium in the NYC match.

A second half sinbinning to Jack Murchie proved the difference, as the Eels used the advantage to work their way back into the game and take the lead through a 78th minute field goal.

The Raiders had their hearts broken with two minutes left when Eels halfback Troy Dargan slotted the field-goal to seal the come from behind win for the home side.