I really had a great afternoon at the Canberra Raiders Cup Grand Final. It's been a great year covering the competition. Just loved getting around to every ground. Loved every moment. Rugby league people are great people. 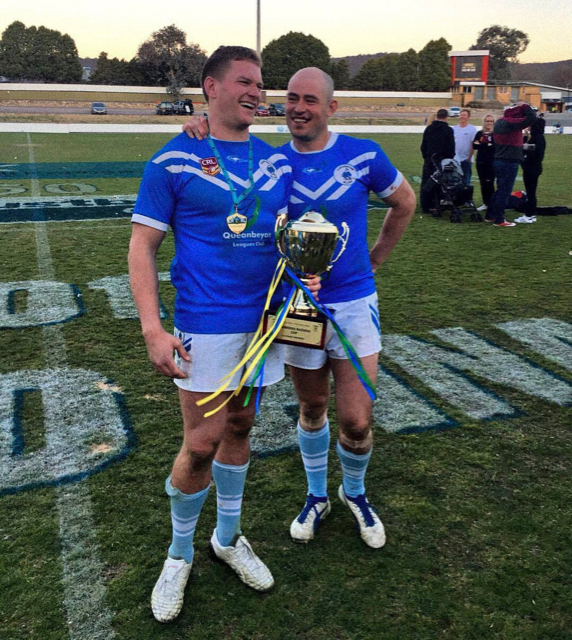 You won't know what to do with yourself next weekend

Canberra Raider Cup over... All of our teams out of the finals... World Cup to look forward to.

I have to say I love that pic of Campo and Kyle O'Donnell. Almost accidentally took it. I think it encapsulates what a season of local footy is all about. 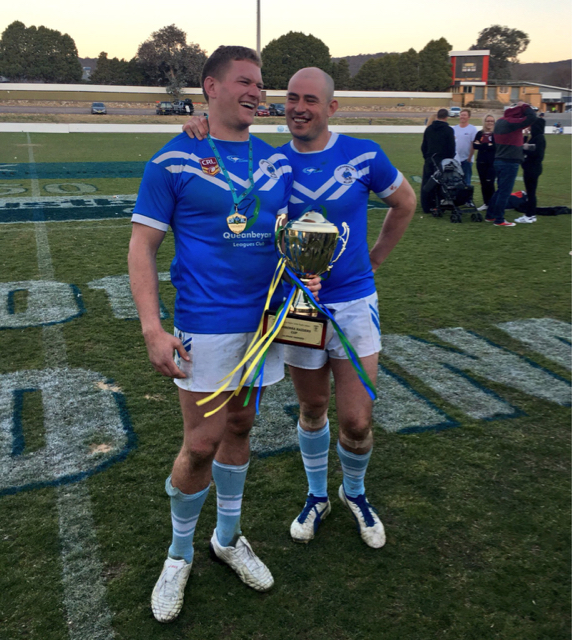 The Queanbeyan Blues are 2017 Canberra Raiders Cup premiers after defeating the Queanbeyan Kangaroos,13-6, in a hard fought Grand Final at Seiffert Oval on Sunday.

The Blues started the season on a 14 game winning streak, before dropping the two final matches of the regular season - and being dominated by the Kangaroos in the major semi final. But the class of the minor premiers came through on the day that counts most.

Blues captain/coach Terry Campese led his team to a premiership in his first season of coaching - and was named the player of the match in the Grand Final to boot.

Campese was in everything that the Blues did - and the much anticipated "battle of the playmakers", between the Blues captain and the Kangaroos' Brent Crisp, ended in a points decision to Campese.

Campese produced the first opportunity of the game for the Blues in the ninth minute via a booming 40/20 kick. The Kangaroos defended the line stoutly and held their cross town rivals out. However, just four minutes later, Campese was at it again, grubbering ahead towards the in goal for his flying halves partner, Adam Misios. His try and Campese's conversion gave the Blues an early 6-0 lead.

The Kangaroos struck back in the 19th minute, when Brent Crisp hoisted a huge bomb and Blues winger Brendon Taueki was not able to handle it. That allowed Tolokana Aroha Tuinauvai to regather and score a four pointer. Crisp's conversion levelled it up at 6-6.

There were chances for both teams for more points in the first half. Blues fullback Jake Wheeler threatened a couple of times, and Kangaroos half Josh Essex dropped the ball over the line in the 26th minute, when he looked certain to score. But the teams went to the half time break all tied up at just six apiece.

The arm wrestle continued in the second half, but the Kangaroos lost the leadership of player/coach Aaron Gorrell 10 minutes in - and as the match wore on, it seemed to tell on the men in maroon.

In the 56th minute, Terry Campese broke the deadlock with a field goal. And with 15 minutes remaining, the Blues extended their lead, courtesy of a barging try next to the posts by forward Kyle O'Donnell.

The Kangaroos had their opportunities to score in the second period. The biggest threat came in the 58th minute, when a Campese pass was intercepted by Tolokan Aroha Tuninauvai - but Tyler Stevens and Campese chased and caught him. The Blues defence refused to crack, no matter what was thrown at them, and the seven point margin would prove to be enough. 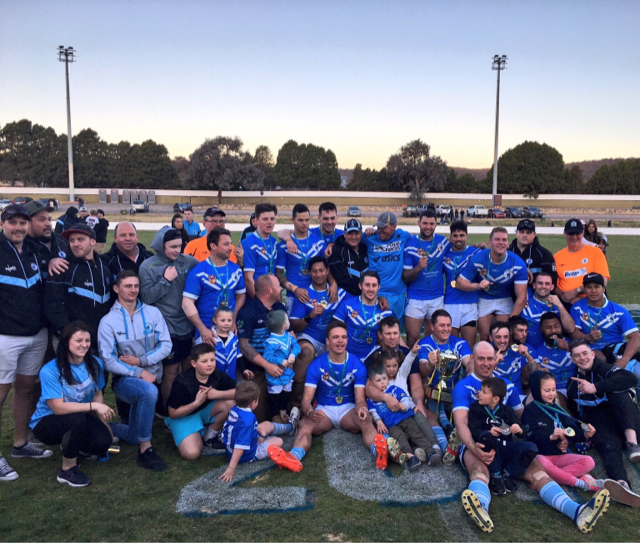 Aaron Gorrell hung up the boots for the last time after the match. "They were the best all year and they deserved today - it would've been nice to steal it from them, but we just weren't good enough," he told The Canberra Times after the match.

Terry Campese last won a premiership playing for the Blues as a junior. He credited the victory to his team's sterling defensive effort.

"It's been a long time between drinks for myself. Coming back to the club that I love, I grew up with. We had a great start to the season. We let it slip there for a few weeks, but credit to the boys. The defence was outstanding against the best in the league," he said.

Terry Campese is walking wounded with an arm injury to go with six stitches in his lip and dissolving discs in his back that left him barely able to walk for three days. But the former Raiders skipper is confident he'll be fit to throw on a different shade of blue for the World Cup, with the chance to play in Canberra one of his biggest drawcards for the tournament.

"That's still over a month away, a couple of months until we play here in Canberra. That shouldn't hinder me at all," Campese said.

The Canberra Region Rugby League season comes to a close this weekend as 34 teams converge onto Seiffert Oval this Saturday and Sunday for the junior grand finals.

The under-17s Bulls girls will be one of 34 teams playing for premiership glory at Seiffert Oval this weekend.

The Canberra Region Rugby League is delighted to announce an overall increase in the number of registered rugby league participants in the Canberra region.

One of the largest areas of growth was the number of female participants rising to 796 – a spectacular increase of 82%.

Starting the season in the unfamiliar position of halfback, McQueen starred for a struggling Warriors outfit before reverting to his favored fullback position in the second half of the season. Overall, the 22-year-old scored 12 tries for the season with two hat tricks for the season.

Having enjoyed success for the Kangaroos this season, Jed Simbiken was a part of the successful Monaro side in this year’s U23’s Country Championships.

Taueki scored 16 tries and proved to be a handy reserve kicker for the Blues with three goals during the season.

I'm a bit late in saying it, but gee that Aaron Gorrell has been good for local football. I don't know the bloke personally but I'd like to shake his hand on a great career locally.
Top

Willie Peace came to the Austbrokers Canberra CRC with a glowing resume. Having started his career with the Cronulla Sharks, he’d played NSW Cup for the New Zealand Warriors as well as representing Samoa. Cleve McGhie showed his incredible consistency in an otherwise inconsistent Woden side.

No surprises in the halves as Crisp and Campese get the nod after leading their respective sides to the Grand Final this season. Crisp had arguably his most memorable season in the Austbrokers Canberra CRC to date as he won almost every individual award possible.

After plying his trade for the Central Queensland Capras for two seasons in the Intrust Super Cup, Mitchell returned to Tuggeranong to help propel the Bushrangers into the finals.

Although it wasn’t the title defence that West Belconnen were hoping for, nobody could blame their failure to make the finals on Tori Freeman-Quay. Meanwhile Michael Cullen slipped under the radar as the Blues claimed the 2017 Premiership.

Although Cannon wasn’t in the running for a starting position, few players could claim to impact a game from the bench as well as the elusive dummy half.

Having narrowly missed a playing spot in our Team of the Year, the Naughton brothers get named as coach due to their fantastic achievements this past season.

Full Team of the Year: