Former Raiders forward Kyle O'Donnell will headline a list of new recruits for the Blues when training resumes in the last week of January.

"He said that one of the biggest reasons why he wanted to play was just how successful Raiders was last year, going to a few of their games gave him an itch again, so he's definitely one of our marquee players," Blues coach Terry Campese said.

Justin Giteau has joined the Bushrangers as the club's first grade coach and the former Queanbeyan Blues premiership winner will be joined on the coaching staff by Jeremy Braun and Andrew Theuma. The club has applied for a clearance for the return of club junior Jamal Nchouki, who was snapped up by the Blues en route to consecutive premierships in 2015.

"The definite goal will be to breed a lot of the juniors, let the juniors come through the club, and we'll be able to push them through first grade hopefully, rather than having to bring blokes into the club.

Nine teams will again look to claim top honours in the Canberra Raiders Cup in 2017. After a stunning upset of the Queanbeyan Kangaroos in last years grand final, the West Belconnen Warriors will be the team to beat heading into the new season which kicks off on April 1.

Thanks for the update Mysterio! 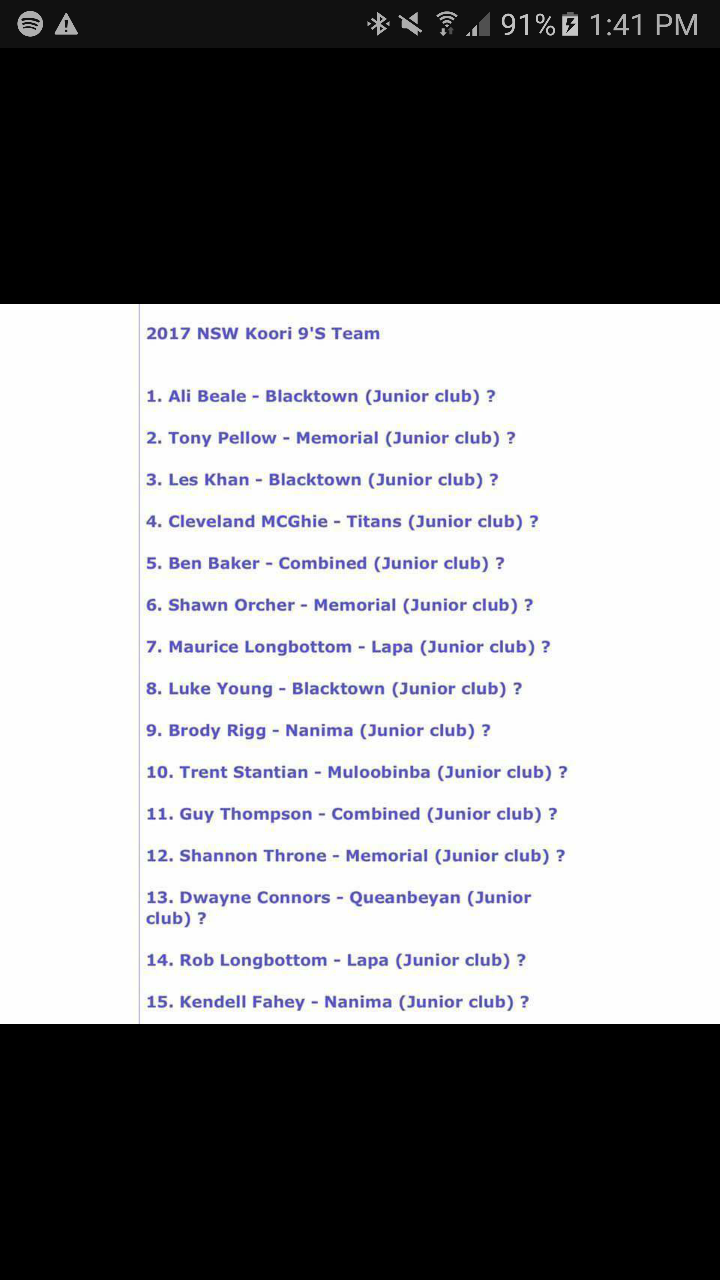 Scott Logan is coaching the Belconnen Sharks this year.
Top

Good to see him back in the national capital.

Terry Campese's Canberra Raiders career didn't end how he planned it. And he hopes he might yet get one more game at Canberra Stadium - for Italy in the 2017 World Cup.

"It would be good to get out there and hopefully get some support as well. It would be nice to obviously get to play in front of the family and thank them for everything they've done for me. Depending on how I go this year with the Queanbeyan Blues and stuff it might be my last ever game.

VIDEO: Queanbeyan Blues to have a different look in 2017

The Queanbeyan Blues will have a different look this season when they line up in the Canberra Raiders Cup.
Former Raiders captain Terry Campese will be steering the side around the paddock, happy to be home after a stint in the English Super League.

The Young Cherrypickers will be hosting a trial game against the Tuggeranong Bushrangers this Saturday 18 March at Alfred Oval.

The annual Matt Turner Shield will be played in in Temora on Saturday, 18th March, against West Belconnen. 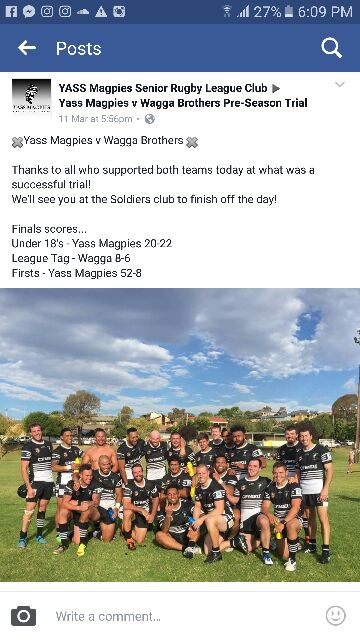 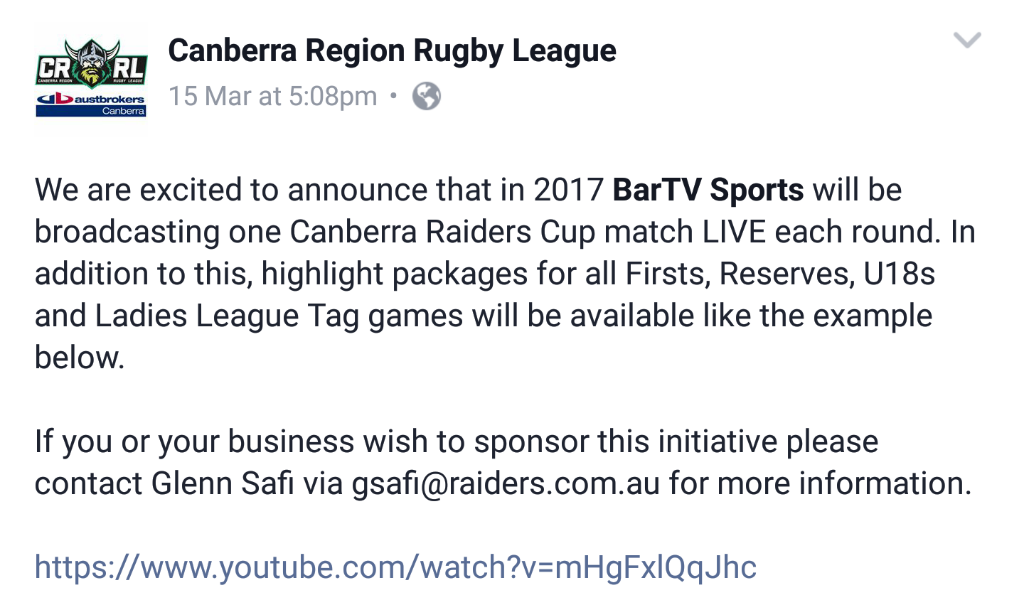 That's outstanding! BarTV Sports do a good job in Newcastle from what I've seen. 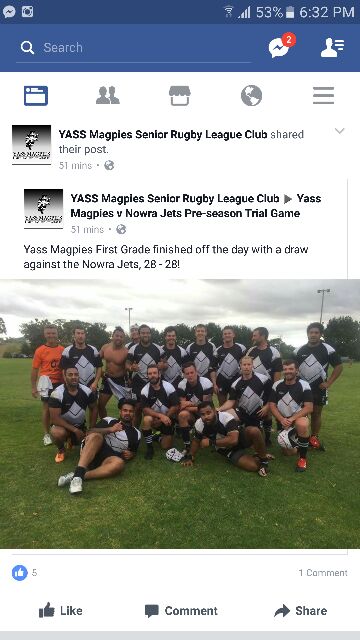 After the charity match was such a success wouldnt it be cool if every year the best players from act based teams (bushrangers,rams,bulls, sharks, warriors) play against best of nsw based teams (bulldogs, yass, blues, roos) in a canberra State of Origin

Raiders’ halfback Blake Austin and hooker Kurt Baptiste – both 26 – provided a one-hour session of training drills and games with the juniors.

“It’s always great to help out juniors and small clubs. I enjoy it, it makes you remember when you were a junior, too,” Baptiste said.

Much news on players in the Canberra Raiders CUP this year? Are the picker boys still with Goulburn? Qbn Blues favourites?
Top 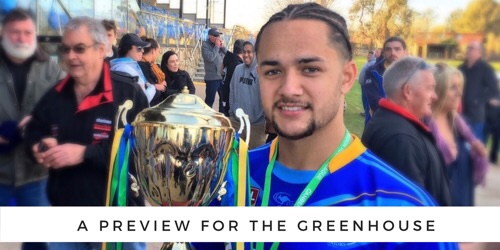 The first round of the Canberra Raiders Cup takes place this weekend, with matches on both Saturday and Sunday afternoon.

The upset winners of the 2016 Grand Final, the West Belconnen Warriors, travel to Gungahlin Enclosed Oval on Saturday to meet the Bulls. Warriors coach, former Raider, Troy Thompson is expecting a tough battle in defending their premiership - with the two Queanbeyan teams, the Blues and Kangaroos being the "strongest on paper".

It's a sentiment shared by Gungahlin Bulls player Jack Elliot. "The top four teams will probably include the Blues, they'll be strong... Westies again and the Roos are looking pretty strong too," he says. But he's still looking to see the Bulls make a challenge. "We've got a few old boys back. Willie Raston's back with us this year and Sheen Lomax. They bring a bit of experience. It should be a good year." The Bulls are again coached by former Raiders Lincoln Withers and David Howell - and Withers has named himself on the bench.

The Belconnen United Sharks host the Queanbeyan Blues at O'Connor on Saturday. It will be a tough first up battle for the Sharks at home, against last year's preliminary finalist. It is a battle between two former Raiders in the coaching ranks. Scott Logan has taken over at the Sharks, while former Raiders captain Terry Campese has returned from a stint in the English Super League and takes over as captain-coach at the Blues - his junior club. Campese has replaced Simon Woolford - who has headed to Newcastle to coach the Knights NSW Premiership team.

"Obviously when you talk about post-football and what happens after rugby, I've been thinking about [coaching] for a couple of years now," Campese said on taking the role.

"It's something that I'll give 110 per cent in and it'll be good to give back to the club that gave me an opportunity to start my rugby league career."

Campese has been active in recruiting rugby union players for the Blues - as they count as zero points in the Canberra Raiders Cup points based cap system. Former Brumbies winger Francis Fainifo, Brendon Taueki, Brendon Spears and David Beath will all appear in Round 1. Former Raiders forward Kyle O'Donnell is another Blues recruit, but he will not play the Sharks, as he is injured.

On Sunday, the Goulburn Bulldogs will meet the Woden Valley Rams at Goulburn's Workers Arena, while the Queanbeyan Kangaroos take on the Tuggeranong Bushrangers at Freebody Oval. Yass Magpies have the bye.

The Greenhouse will be at Freebody this weekend for the Roos and Bushies clash, with live scores on @CanberraCup on Twitter.

Former NRL player Aaron Gorrell will again be at the helm of the Kangaroos - and will line at hooker in Round 1. He'll be ably supported by veteran former Raider Brent Crisp.

Justin Giteau has taken over as coach at Tuggeranong. Giteau - brother of the rugby union's Matt Giteau, and the son of Raiders legend Ron Giteau - was formerly at the Queanbeyan Blues as a player and won coach of the year awards at West Belconnen. He's been brought in to turn the strong juniors through into first grade.

But the Bushrangers have a tough assignment against last year's Grand Finalist at their home ground in Queanbeyan. The Kangaroos went on a 16 game winning streak in 2016, before being upset in the decider.

"We have a points-based system and union players count as zero pointers so I thought I'd try and get a few over. I was hoping one or two would be able to adapt to the game, but the trial we had it was mind-blowing - the whole lot of them played out of their skins."

RaidersFanatic wrote:Much news on players in the Canberra Raiders CUP this year? Are the picker boys still with Goulburn? Qbn Blues favourites?

Only Mick remains with the Goulburn Bulldogs.

Just watched the bartv livestream and Gungahlin was tough West Belconnen were throwing everything at them 2nd half and the bulls held strong strong performances from bulls forwards Jack Noble and Shannon McKaskill as well as Sheen Lomax and Sato Ketia-Opo and strong efforts by Warrior's back rower Tori Freeman-Quay.

I mean Jack Elliot not Jack Noble my bad hahah