Canberra Raiders recruit Brent Naden was reported for biting in the Mounties' loss to the Penrith Panthers in the NSW Cup game at Penrith on Saturday.

The incident occurred in the 58th minute, with Naden alleged to have bitten Panthers halfback Darren Nicholls on the arm.

Any word on the outcome for Naden?
Top

Canberra Raiders centre Brent Naden has accepted a one-game ban for the biting incident that came out of the Mounties' NSW Cup clash against Penrith on Saturday.

Naden will miss the Mounties next game - against Wentworthville on Sunday week - and has 80 carryover points from the grade-two contrary conduct charge. 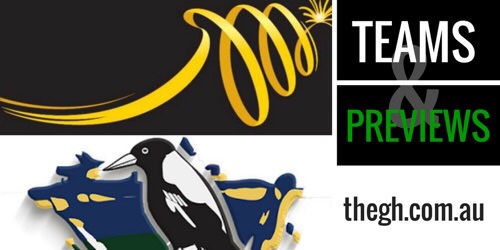 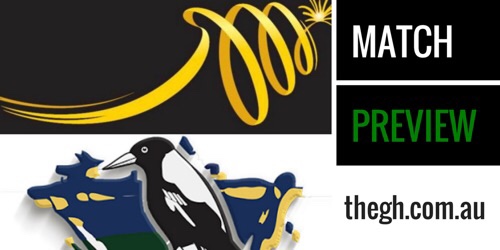 The Mounties face the Wentworthville Magpies this Sunday at Ringrose Park - and will be hoping to return to the winners' list after last weekend's bye.

Mounties were last start, 18-12, losers to the Panthers at Penrith Stadium - with the home side in control for much of the match. Penrith led 12-6 at the break, thanks to tries to centre Michael Oldfield and five eighth Darren Nicholls. And they went to a 12 points lead shortly after the break, when Jed Cartwright crashed over the white line near the posts. While a try to Dave Taylor in the 56th minute closed the gap, that was as close as Mounties would get. Despite Mounties having good momentum in the final stages, they could not find a way through the Penrith defence.

Dave Taylor played for 75 minutes, and besides scoring a four pointer, he made 132 metres from 14 runs, 62 post contact metres, five tackle breaks and 27 tackles. He's got a fair way to go to rebuild his match fitness, but it was still a good performance after a long break on the sidelines. Adam Clydsdale topped the tackle count with 61, while Eddie Aiono produced the most metres gained (182) for Mounties. Jeff Lima also put in a strong performance, making 149 metres from 19 runs and 40 tackles. Lachlan Croker had the only try assist for Mounties, after he set up Dominic Reardon in the first half.

Mounties are still in third place on the competition ladder, but the North Sydney Bears and Penrith Panthers are now snapping at their heels. They are four competition points adrift of the second placed Warriors - and eight away from the table topping Wyong Roos.

This week's opponents, the Wentworthville Magpies, have won five games this season, while Mounties have posted eight. Mounties average just under 23 points per match, the Magpies just under 20. However, the Magpies have slightly better defence, conceding 19 points per match on average, compared to 21 for the Mounties. Mounties have a slightly better points differential (+24, compared with +6).

Wentworthville broke a four game losing streak in Round 15, suffering losses to Illawarra, New Zealand, Wyong and North Sydney in their past five matches. Mounties have a LWLWL record in the last five matches.

Mounties have lost Brent Naden for this match, after he took a one week suspension for alleged biting. Eddie Aiono moves into centre to cover Naden's absence, with Alofi Mataele coming in on the wing. After making his NRL debut in Round 14, Royce Hunt has been named at starting prop, in place of Makahesi Makatoa. Jack Nelson and Scott Sorensen have been named in the second row, with Yileen Gordon and Sam Duggan dropping back to an extended bench.

For the Magpies, captain Cody Nelson moves from the second row to hooker, replacing Cameron King. Nathan Davis comes in for John Folau at centre, with Folau moving to the second row. Joseph Ualesi and Siosaia Vave have been named as starting props, in place of Alex Twal and Atini Gafa. Raymond Stone drops back to lock, with Ualesi's move to prop. Marata Nuikore replaces Stone in the second row.

Our tip: That's a fair bit of chopping and changing for both teams - and Mounties will certainly miss Naden, who has been in his best form for the club in recent weeks. Despite a good last start win for the Magpies, Mounties have a clearly better form line than Wentworthville - despite some inconsistent performances. We'll go with the men in black and yellow.

The Wentworthville Magpies bounced back to form in perfect fashion in Round 15, putting in a brilliant 80-minute performance against the Wests Tigers to record an emphatic 40-14 victory.

The Mounties are once again sitting firmly in the top four, but will be desperate for a much-needed two points this weekend to stay in contact with the the top-two contingent of the Roos and Warriors.

Packed with first grade experience, with the likes of Dave Taylor and Jeff Lima constantly causing havoc around the middle-third, expect the Mounties to find their best in the later stages of the season as they look to make a strong charge towards the finals. 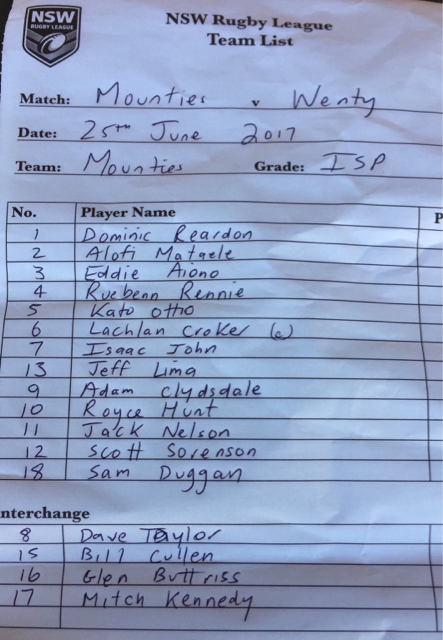 This post will update with scores, so keep refreshing for the latest. Kick off is at 3:00pm

Wentworthville have scored 30-unanswered points to record their best win of the season to date, a convincing 36-18 victory in what was a high-quality affair at Ringrose Park.

After a slow start Mounties looked to have found their groove when leading 18-6 towards the back-end of the first-half, but two tries in the closing minutes before the break gave the Magpies the impetus to go on with the job.

The home side was best served by their ever-elusive fullback Honeti Tuha and damaging centre, Nathan Davis, who capitalised on the strong go-forward provided by the big men upfront, led by Siosaia Vave and Marata Niukore.

How did Taylor, Ottio and Cullen go?? 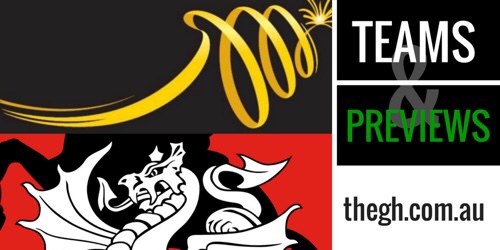 Sent from my SM-G925I using Tapatalk

There are a few highlights here from about 5 minutes in.

The only thing that really stands out is some terrible defense and that Taylor looks like George Rose at the moment.
Top 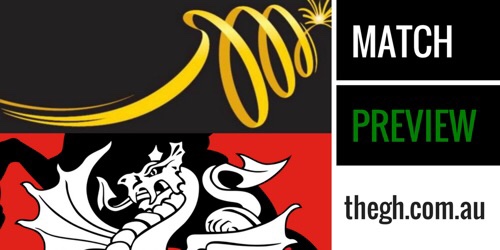 The Mounties are at Canberra Stadium this Saturday, part of a "traditional" triple header, when they face Illawarra in a replay of the 2016 NSW Premiership Grand Final.

Mounties have lost two straight, going down to the Wentworthville Magpies at Ringrose Park last Sunday. The Magpies came from behind, scoring 30 unanswered points, to take out a 36-18 victory.

Mounties led 18-6 after 23 minutes, with tries to Adam Clydsdale, Kato Ottio and Dom Reardon in the space of around 10 minutes. It looked like Mounties were really clicking into gear, but those were the only points that Mounties would score for the afternoon. A try to Magpies' fullback Honeti Tuha at the half hour mark, and another to centre Nathan Davis just before half time, reduced Mounties' margin to just two points at the break.

While Mounties created their chances to score in the second half, poor execution cost the men in black and yellow. And the home team piled on another 20 points - through tries to Marata Niukore, Siosaia Vave and Nathan Davis.

Mounties have now slipped to fourth place on the ladder - equal with the Penrith Panthers on 19 competition points, but behind them on points differential. Mounties are still four competition points away from the second placed Warriors, but are well adrift of the first placed Wyong Roos.

This week's opponent, the seventh placed Illawarra, has won seven games this season, compared with Mounties' eight. Mounties have better a slightly better attacking and defensive record than the Wollongong outfit. Mounties score just over 22 points per match (21 for Illawarra) and concede 22 (25 for Illawarra).

Illawarra suffered a 32-20 loss to the Newcastle Knights in their last start, the third in a row. Illawarra is now on a WWLLL form line in the past five games, with big losses at the hands of the Bulldogs and Roos in recent weeks. Mounties are on a WLWLL form line.

Brent Naden (suspension) returns for Mounties, alongside Eddie Aiono, at centre. As a result, Reubenn Rennie drops back to an extended bench. Alofi Mataele retains his place on the wing. New recruit Bill Cullen takes his place in the starting second row, with Jack Nelson dropping back to the bench. Willie Mataka also comes into the top 17, named as part of the interchange line up.

For Illawarra, Jesse Dee is named at centre in place of Reuben Garrick - who is named in an extended Holden Cup Dragons team. Adam Clune and Jack Payne form the halves pairing, replacing Jai Field and Shaun Nona. Nona was injured in the loss to the Knights last week, and Field has also been named in the Dragons' Holden Cup squad. Mose Masoe comes in at starting prop for Joshua Kerr, who drops back to the bench. In addition, John Tohi comes into the top 17 as part of the interchange line up. Former Raiders forward Rhys Kennedy is named at No. 15.

Our tip: Illawarra recorded a big, 40-18, win over Mounties in their clash earlier this year in Round 8. Both teams have mixed recent form. It's probably a flip of the coin... but Mounties look to be slightly stronger and less disrupted, particularly with the changes in the halves for Illawarra. Mounties in a close one.

Not much to see really. Cullen looking pretty average as far as stats go.
Top

Not too bad though. 33mins. > 12m per carry. 90% effective tackle rate. No errors. No penalties.
Needs more involvement but not bad for a first hit out.

Also notice that Magnus Stromquist turned out for Wenty. Big stats for him. Almost 5 times the carries Cullen had.
Top

The 2016 Intrust Super Premiership NSW Grand Finalists go head-to-head in the last of Saturday’s fixtures, with both sides heading into the clash on the back of last-start losses.

Mounties fell unceremoniously to the Wentworthville Magpies away from home, while Illawarra – minus halfback Shaun Nona in the second-half – proved no match for a red-hot Knights outfit.

Illawarra got the better of Mounties when the pair last met in Round 8, running out eventual seven-tries-to-three victors in a commanding display.

That day, Illawarra winger Izaac Thompson bagged a treble of tries, and the big flyer will be hoping for much of the same after nabbing a double against the Knights last weekend.

Keen to see how Oldfield, Cullen and Knight go

Welcome to our coverage of tonight's NSW Premiership match between Mounties and Illawarra. Here's the final Mounties team: 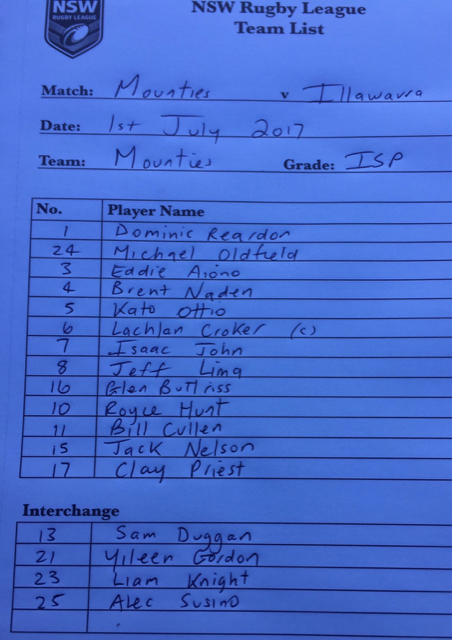 Illawarra kick off, we are underway!
Top

6th min TRY ILLAWARRA to Kalifa Faifai Loa to winger. Not converted from out wide.

27th min TRY ILLAWARRA to Kalifa Faifai Loa, his second for the night. He dives over in the corner. No conversion from the sideline.

How do the new recruits look?
Top

75th min Clay Priest, we believe, sin binned. This has really been a poor match.

Illawarra have breezed past Mounties in their Round 17 Intrust Super Premiership NSW clash in the nation's capital. The match started in cold conditions in Canberra as the sun descended on GIO Stadium.

That was one very average match. Poor performances all round, really.

greeneyed wrote:That was one very average match. Poor performances all round, really.