Thank you!
Gina Riley: Oh, come on, John. That’s a bit old hat, the corrupt IOC delegate.
John Clarke: Old hat? Gina, in the scientific world when they see that something is happening again and again and again, repeatedly, they don’t call it old hat. They call it a pattern.
Top

Welcome to our coverage of today's NSW Premiership Final Week 1 clash between Mounties and Illawarra.

As far as first-week elimination finals go, it doesn’t get much bigger. Mounties and Illawarra, grand final combatants in 2016, face off once again with one team to be sent packing from the Intrust Super Premiership NSW Finals race.

Mounties’ six-week form is a pass mark with three wins in that period, including their best win of the season in a 51-10 thrashing of Wyong in Round 20. Illawarra have won just twice in that time, most recently coming away with a draw against the Bulldogs to secure their place in the finals, and have been victorious just once in their three games at UOW Jubilee Oval this year.

Mounties have a particularly strong pack boasting the likes of Royce Hunt, Liam Knight and Team of the Year selection Scott Sorensen, while Illawarra’s Hind, Jacob Host, Luciano Leilua, Will Matthews and former Mounties prop Rhys Kennedy are also that side’s strength. This battle will obviously go a long way to determining whose season is over at around 4pm on Sunday afternoon, while the battle between playmaking fullbacks Lachlan Croker (Mounties) and Jai Field (Illawarra) will also be an intriguing one.

And listen to on line radio here: http://www.steelesports.com.au 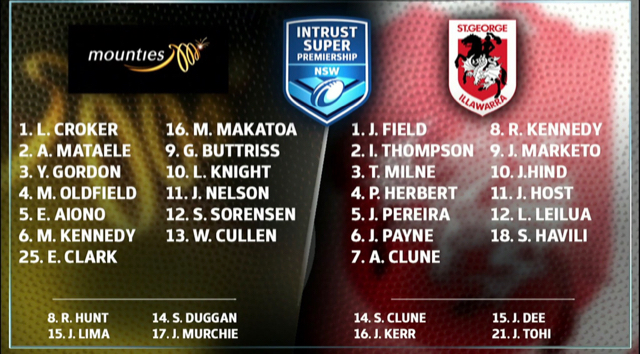 4th min TRY MOUNTIES to Bill Cullen near the posts. Set up by a short ball from Makahesi Makatoa. Converted Maurice Kennedy. Mounties 6-0

34th min TRY ILLAWARRA to Jai Field, found space out wide. It's off the back of a penalty. Field converts his own try. Mounties 12-6 Mounties should lead by more given the possession.

37th min TRY ILLAWARRA to Tane Mil e. It's a little soft. Again it's off the back of a penalty, Sam Duggan placed on report for a late tackle on the kicker. No conversion. Mounties 12-10

Who's the half in 25?
well, I guess you could say that I'm buy curious.
Top

Sorry just saw the image above
well, I guess you could say that I'm buy curious.
Top

Absolutely imploded the last 10
Minutes
well, I guess you could say that I'm buy curious.
Top

Old fields very good at this level.
well, I guess you could say that I'm buy curious.
Top

As pathetic as first grade
well, I guess you could say that I'm buy curious.
Top

Man threw that away with terrible low percentage plays. Did so well to get back into it and dominate in defence then threw it away with hero plays.
Top

Good luck finding someone who can do a job in first grade from that lot bar Oldfield and Knight IMO
well, I guess you could say that I'm buy curious.
Top

I thought hunt was pretty damaging too with some good post contact metres.
But knight is definitely the pick of the pack.
Top

A Jai Field-inspired Illawarra side has overcome two deficits in a crazy game of Rugby League to eliminate Mounties in a 30-26 thriller.

Field scored a last minute try to steal the game from Mounties, but was instrumental for the entire contest, scoring two tries and setting up another to ensure Illawarra will take on the Canterbury Bulldogs next week.

That's a shame. They never really got going this year.
Top

Byrne will bring plenty of experience to the role, after filling various leading positions with the club. The former Canberra Raiders utility will remain based in the nation’s capital next season.

Mounties have claimed their second consecutive NSWRL Club Championship for their impressive season in which all four senior teams reached the NSWRL Finals Series.

Back rower Scott Sorensen has been named the Player of the Year by Canberra Raiders affiliate club, Mounties. Here are the winners:

PAUL Crarey is excited by what he believes Alec Susino can bring to Barrow Raiders after the Italian international became the club's first new signing ahead of the 2018 Kingstone Press Championship season.

The prop has drawn some rave reviews from his performances with Canberra Raiders' feeder club Mount Pritchard Mounties in the Sydney Shield competition, where he won the club's rising star award and led the way in metres made and offloads this year.

Eddie Aiono has gone to Wentworthville.

NSWRL draw out but is subject to change. I am sure GE will put it up in full

First game away to Dragons and live on CH 9 which is going to have a game live each Saturday at 1pm.
Top

Bay53 wrote:NSWRL draw out but is subject to change. I am sure GE will put it up in full

First game away to Dragons and live on CH 9 which is going to have a game live each Saturday at 1pm.

About time they got more air time. I couldn't believe we had a new 24hour league channel on fox and somehow ended up with less NSW cup being shown.
Top


The NSWRL’s premier competition, the Intrust Super Premiership NSW, will be broadcast live on Channel Nine in 2018 for the first time, in addition to increased coverage from FOX SPORTS, making it the most watched in the event’s history.

While full details of the draw are yet to be finalised, all 24 rounds of the regular season will feature in a 1pm Saturday live slot on the Nine Network, in addition to up to two games live each week on Fox League. It is likely the Channel Nine coverage will kick-off in Round One with the clash between St George Illawarra and Mounties at WIN Stadium.

Have the stadiums been announced i.e, do we know how many games will be proceeding Raiders matches?

No, only that the home teams are listed first. A professional administration would sort out the draw for the next season well before this... but this is rugby league.