Wikifan wrote: ↑February 23, 2021, 10:42 am Yes sorry Keaton Meads , as I mentioned by all reports he was outstanding last weekend . Also sounds like he’s a great kid off the field as well after reading article re camp couple of weeks ago .

He was impressive in the Canberra Cup last year. Kiwi kid, probably needed to get a touch fitter, but looked a prospect.
Top

NRL.com will be live-streaming the Raiders v Bears match on Saturday with kick-off at 2pm in Queanbeyan. Kayo and club websites will also broadcast the match: https://www.nrl.com/news/2021/02/24/517 ... n-suaalii/

For reference here's a highlight from Leo Thompson's twin Tyrone. The #2 for Wellington in the black, skip to 1min 55.

Sent from my SM-G973F using Tapatalk
Edrick The Entertainer
Top

The Canberra Raiders are set to play six double headers at Canberra Stadium in 2021, with the return of the Green Machine to the NSW Cup.

The Raiders have not fielded their own NSW Cup team since 2007. They established an affiliation with the Souths Logan Magpies in the Queensland Cup in 2008, before being forced back to the NSW Cup.

The Raiders affiliated with Mt Pritchard in 2012, but last year, Mounties decided to switch their loyalties to the Canterbury Bulldogs for 2021.

It looked like the Raiders would be without a NSW Cup team for this season, until they announced they would enter their own team, withdrawing from the Under 21s Jersey Flegg Cup at the same time.

ARLC Chair Peter V'landys has led a return to playing "all three grades" this season, allowing fans to follow the progression of their club's players from Under 21s through to the NRL.

While the Raiders will not have "three grades" this year, their NSW Cup team will provide the "warm up" match at six of their fixtures at Canberra Stadium.

Three of the Raiders NSW Cup home games will be played at Raiders Belconnen. They will also play before the Raiders NRL match which has been transferred to Wagga.

In addition, the Raiders NSW Cup team is to play prior to their NRL counterparts at four away venues.

The NSW Cup draw is yet to be "officially" released, but it has been issued on the Play Rugby League site. It is possible that there may be some further changes before the draw is finally settled.

The NSW Cup was sponsored by sporting apparel company Canterbury in recent seasons, but it appears it the NSW transport safety campaign, "The Knock-On Effect" will be the naming sponsor in 2021.

* Home game transferred to away venue

A report for The Greenhouse

Welcome to our coverage of today's NSW Cup trial from Seiffert Oval. It is a somewhat overcast day in the capital region. It's cool this morning, currently 17C... but there's still a forecast top of 27C.

We will have live scores from the trial from 2:00pm this afternoon.

Here are the live stream links on the NRL.com network. Both the NSW Cup and NRL trial matches today are broadcast on Kayo.

And this is Bears line up: 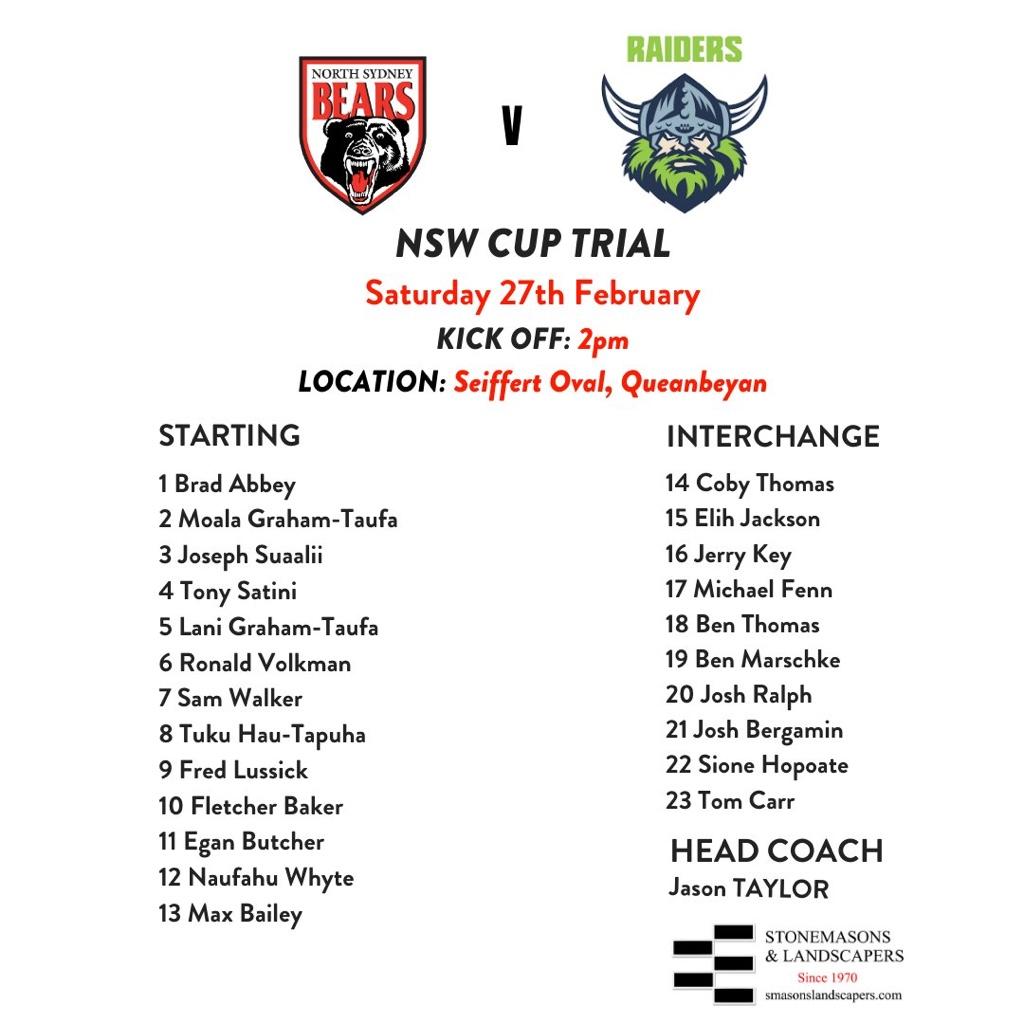 Who are the commentators? I'm hoping they aren't Sydney wankers who will cream themselves whenever Suuali gets the ball.
Some people talk about the weather. Others do something about it.

Horsburgh has looked best on field in the opening stages

Great footwork for that try too

The Greenhouse wrote:Raiders kick off, we are underway! The new home jerseys look awesome!

I agree, I love the home jersey!
'I've got 17 blokes in that dressing room that are hurting'
Top

16th min TRY BEARS to Joseph Suali. They kick on the last, regather and pass out wide and the Raiders are short. Looked like a double movement live, but it’s awarded. No conversion.

Redhorse best forward out there

Can someone catch me up on why everyone loves Suali?
Top

22 minutes in, drinks break. It is now very hot out there in the sun. Raiders ruck it out from their own red zone.
The Greenhouse score update service
Top

gangrenous wrote:Can someone catch me up on why everyone loves Suali?

He's this years next Greg Inglis

Horsburgh and Gulre looking great in the first 20 mins. Lui pretty good too. Waiting for Rushton to do something though.
Some people talk about the weather. Others do something about it.

Horsburgh and Gulre doing great. Looking to Rushton to do something though.
Some people talk about the weather. Others do something about it.

gangrenous wrote:Can someone catch me up on why everyone loves Suali?

He's this years next Greg Inglis

I thought Hors and CHN were this year’s Greg Inglis?
Top

Raiders lead 6-4 at quarter time. HorsPower try for Raiders under the sticks. He looks very strong and good offloads as well. Suaali scores for Bears following bomb which they regather and he crashes through Medlyn.
Top

LMAO. They try to bring in Suuali with a forward pass and give away a runaway try. Where's his so-called pace to run down Brigham?
Some people talk about the weather. Others do something about it.

Simmonson has looked very good since coming on as fullback. Converted a try from out wide as well which is handy.

Sutton, Guler and Hors all look strong in reserves.

Harry Rushton is bigger than I thought for a young lad but is definitely feeling his way into the pace of the game.
Top

Has Aekin been on at left half or has that been a junior the whole time?

It’s been hard to tell. Simonsson has looked great at fullback. And looks like
He can kick goals.

Depending on this second half... you’d think the selections in this game indicate that Valemei and HSS are the favs for starting spots of Simonsson and Timoko.
well, I guess you could say that I'm buy curious.
Top

North Sydney Bears kick off to start the second half!
The Greenhouse score update service
Top

Half time Raiders 12 Bears 4. Dropped ball by Bears and Moeakiola on the left picks it up and lopes 60 mtrs for the try on the left hand side. Great conversion from Simmonson from out wide. Simmonson looks strong and safe and a threat. Sutton and Timoko strong. Ryan James solid and doing his job first game back after injury. Elijah Anderson on the right hand side of the backline is a big unit. Schneider looks to have a strong kicking game. A little too long in length but he is a teenager and the raw talent is obvious. For the Bears their No7 Walker looks a talent. Quick off the mark and plays heads up footy.
Top

Some arm grabbing in defence, concerns me a bit.