Very good forward pack and plenty of depth. If Barba fires they will push for top 4.
Top

Scrape into the 8 despite having a top 4 squad. I don't think it's a very harmonious squad.
Top

Agreed. Injuries permitting they could push for a title. Barba can win games by himself and one of their biggest issues has been a fullback that just stinks.
Top

Cowboys’ best 17: The man who needs to step up in post-JT era

That's a strong side.
Top

zim wrote:That's a strong side.

Yes it is isn’t it. Personally I would go Clifford over Martin and would also be very tempted to start Baptiste. Granville’s strength is his running game which is suited to the later stages of the half.

I'd be starting Clifford too.
Top

zim wrote:I'd be starting Clifford too.

I doubt the Cowboys would release either but if we aren’t getting Edwards I would take either Martin or Clifford.

Of the 2 there's no way they'd release Clifford. Martin I could see them moving on as soon as it suits them.
Top

Ben Barba being investigated by the Cowboys for an incident at Townsville Casino.
Danny Weidler reporting it.

Club statement. He has been sacked 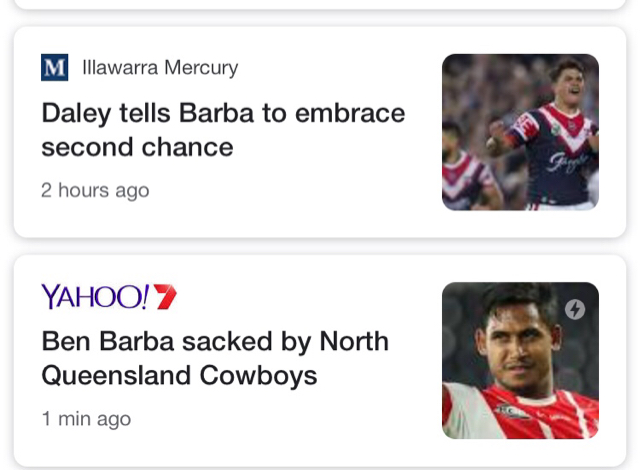 In Townsville you're not regarded as a local until you've had an 'incident at the Casino'. Benny just wanted to fit in.

Oh well. It's off to the Sharks for him then.
* The author assumes no responsibility for the topicality, correctness, completeness or quality of information provided.
Top

North Queensland have terminated the contract of Ben Barba after allegations he physically assaulted his partner at a Townsville Casino on Australia Day. Barba was captured on CCTV footage and also spotted by several witnesses, with Townsville police now investigating the matter.

Ben Barba has been sacked after allegedy assaulting his partner Ainslie Currie in Townsville. The North Queensland Cowboys terminated the contract of the 29 year old on Friday night after an internal investigation found a "significant breach of the terms of his contract".

Today, North Queensland Cowboys terminated the playing contract of Ben Barba due to a significant breach of the terms of his contract.

Chairman Laurence Lancini stated: “When a player joins the North Queensland Cowboys he agrees to abide by the terms of the contract. After an internal investigation, it has been determined that this player has acted in contradiction to both the terms and the spirit of that agreement. Accordingly, the club has terminated his contract and has informed the NRL’s Integrity Unit.”

There have been allegations for years regarding this bum, honestly see ya later looser.
History doesn't repeat itself, people repeat history.
Top

In jail, you **** need help also if that's you narrative.

Reported that he assaulted his partner... piss him off if true

In jail, you **** need help also if that's you narrative.

Some people need a reality check.

**** him. I hope his partner and children are ok and get the support to leave this ****, once and for all. Should be sacked, deregistered and never to play the game again. Then the police and courts can deal with him.

Seriously how dumb! You are in the casino with witnesses and cameras everywhere, casino is also a sponsor of the club you play for. Greenberg has already spoken and warned all the captains

And you still do it? AND expect to get away with it?

I think if these were actions he thought about rationally he wouldn't be doing them in the first place.
Top

zim wrote:I think if these were actions he thought about rationally he wouldn't be doing them in the first place.

I know but wow!!
Scary to think what happens when these kind of people (men and women) do when the public can't see them!

Yeah it's pretty sad to imagine what she's put up with behind closed doors.
Top

Yeah, he has to be done. He’s quickly approaching Carney level douchebag.


Sent from my iPhone using The Greenhouse mobile app powered by Tapatalk
Feel free to call me RickyRicky StickStick if you like. I will also accept Super Fui, King Brad, Kid Dynamite, Chocolate-Thunda... or Brad.
Top

Him and Jacky boi can go out on the town together
Feel free to call me RickyRicky StickStick if you like. I will also accept Super Fui, King Brad, Kid Dynamite, Chocolate-Thunda... or Brad.
Top

I think he is past that. Carney was dumb and yes put people's lives at risk driving and dumb pranks BUT he was never violent or nasty/mean that i remember.

People like lodge, barba, hayne, bird etc are in a whole different boat to carney and fergo imo

Mate Carney was an idiot but he never bashed his missus TWICE.
Top
Post Reply
132 posts